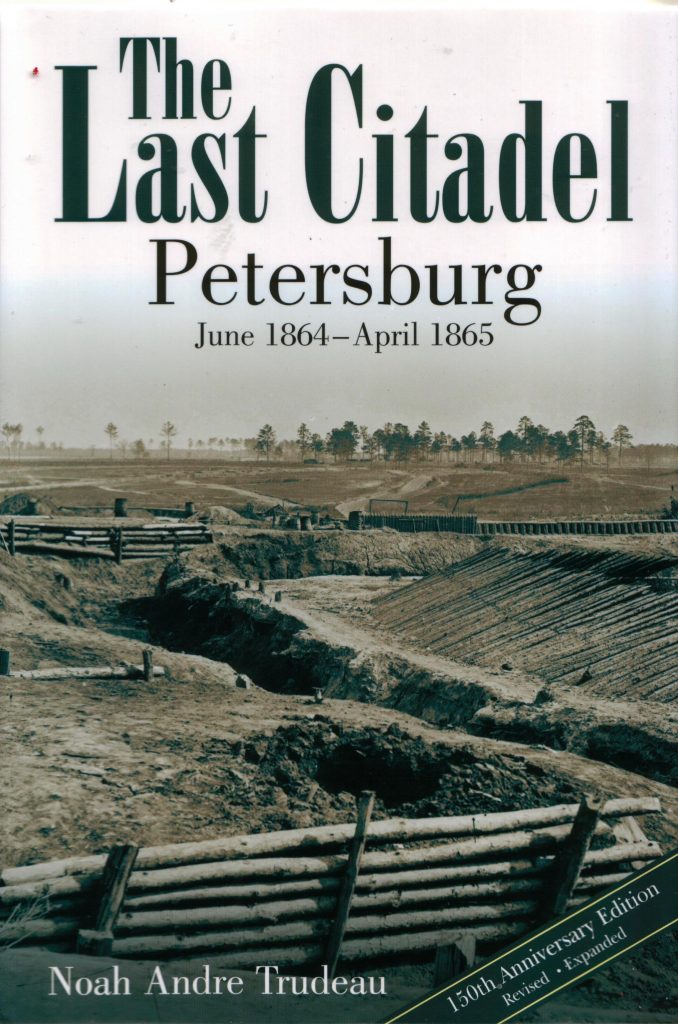 In the American Civil War Petersburg was reckoned the key to the war in the East. It lay astride the five major railroad lines that supplied the Confederate capital, Richmond. Were Petersburg to fall Richmond would be doomed. Grant wanted the “Cockade City” invested and captured. Lee was determined it wouldn’t fall. The result was early ‘trench warfare’, the most extensive military operation of the ACW. The campaign began on 9th June 1864, and ended only on April 3rd, 1865 at the very end of the war. It was the longest and most costly siege ever to take place on American soil, yet has been overshadowed by other, more glamorous, actions of ‘total war’ that occurred at the same time; Sherman’s “March to the Sea”, and Sheridan’s Shenandoah Valley campaign. The ten-month Petersburg siege witnessed more combat actions than these two combined, and involved an average of 170,000 soldiers, not to mention thousands of civilians. By its end the campaign would add more than 70,000 casualties to the war’s total and spell the shape of things to come in the industrial age. ‘America’s Verdun’ if you will.
This (revised) 150th anniversary edition of Noah Andre Trudeau’s original 1991 book includes updated text, redrawn maps, and new material. Trudeau’s style is to let the words of the men and women who were there; officers, common soldiers, and the residents, tell the story via official records, unpublished memoirs, letters, diaries, as well as published material. This is not to say a narrative structure has been totally obliterated, but I did find the format of flitting from one person’s account to another’s failed to grip me in to read ‘what happens next’. There are extensive notes to the chapters, ‘organisation of forces’ pages, and glossary and bibliography, and if this is not a book for the casual reader (and it isn’t) ACW buffs will have a ball. There is plenty of information here to inspire tabletop scenarios, including maps and eyewitness drawings by combat artists, and the importance of supply via railways is emphasised for those seeking to plan campaigns.
‘Trench warfare’ and attrition are never glamorous, but if you’re into the ACW this book should ensure the Petersburg campaign at last gets some true recognition as an unforgettable saga of the determination of both sides to prevail.