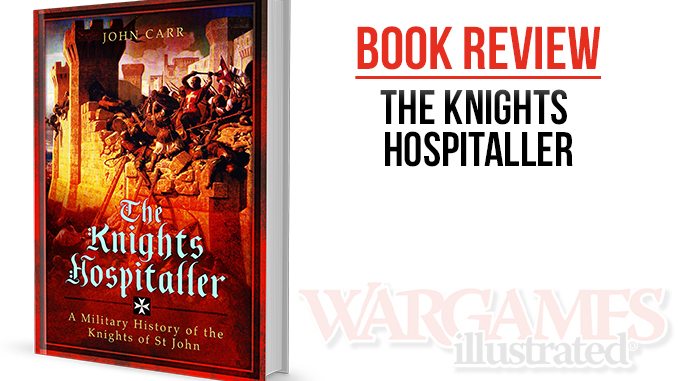 The Knights Hospitaller – A Military History of the Knights of St John
John Carr
Pen and Sword Military, 2016
Reviewed by Dom Sore

The Knights Hospitaller are one of the most famous and oldest military religious orders in history. Formed over nine-hundred years ago in Jerusalem and associated with an Amalfitan hospital, they would develop their military role through guarding pilgrims in the Holy Land, side-lining in piracy at times until they became the humanitarian order they are today. They are also a sovereign state under international law with permanent observer status at the United Nations, although not recognised by all countries. John Carr has written a specifically military history of the Order of Knights of the Hospital of Saint John of Jerusalem, which is why they are normally known as the Knights Hospitaller or Knights of St John amongst other names.

Carr has an easy-to-read writing style which is always appreciated in a military history. He is helped by the Hospitallers are serving in the romanticised Crusades, though Carr avoids any romanticising himself. Everything is presented plainly without assigning motives, and Carr does not shy from highlighting times the Hospitalers were at fault. The single Appendix lists the known names of all the Grand Masters of the Order along with their serving times, a good starting point for starting a force of Hospitallers. The description of the fall of Rhodes, which forced the order to eventually relocate to Malta, is deserving of a separate book, yet you do not feel you have missed anything when reading the chapter.

There is one major error; Chapter One should not be read first. I suggest you read Chapters Two through Five then Chapter One and then the rest of the book because it should not go from the Battle of Hattin to the aftermath of the Battle of Arsuf – I hope this is a printing error and not a deliberate ploy. There are also no maps for any battle, which I find annoying. As a wargamer, a map is even more important and the lack of them is a major negative. There is also little critical analysis of the Hospitallers performance in battle. For example, their precipitous charge at the Battle of Arsuf could easily have led to a defeat if Richard I had not reacted in the way he did, but they receive no approbation from the author, though they did win in the end.

If you move the incorrectly placed chapter, this is a good military history of a well-known knightly order. It does not provide much in the way of insight, however, but does not suffer too much for that. The early history of the order is inextricably linked with the Crusades and here is likely to be the most fertile area for the wargamer. The Battle of Arsuf is probably the one they most influenced with the added help from Richard I. It could be played with Soldiers of God, Hail Caesar or Swordpoint, because it is a big battle to fight with lots of interesting sub-plots. Do you allow the Hospitallers to charge? Do you support them if they do charge? That is up to you to decide.