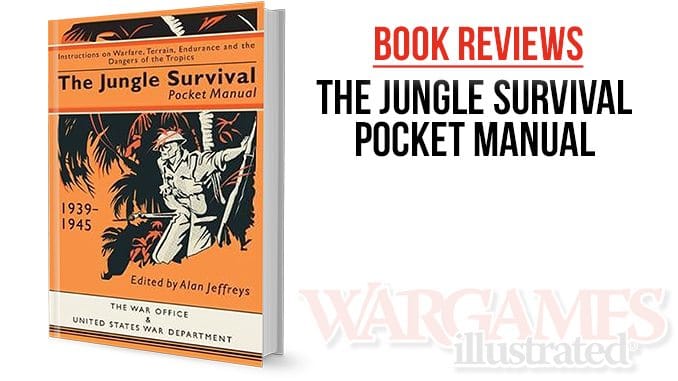 Modern war is seldom fought in green and pleasant valleys. Rather, soldiers trudge through wet mud, hot sand, and thick, steaming jungles. It doesn’t help that along with all the other hazards, these environments contained enemies with lethal intentions. To fight effectively, soldiers required training, and to that end the allies in World War II produced manuals. Alan Jeffreys has edited their collected wisdom in a tidy, little book The Jungle Survival Pocket Manual.

The manual consists of three chapters; Doctrine, Living in the Jungle, and Learning the Lessons. Jeffreys focuses on the post-1943 phase when the emphasis in manuals changed to taking the fight to the Imperial Japanese Army. For example, in Doctrine there is no section on withdrawal, and destroying bunkers is added. Indeed, conducting offensive tactics was the order of the day for a newly organized British Army about to strike back against the over-stretched IJA in Burma. Of course, surviving the jungle took more than an ability to fight; men had to learn how to conduct the basic operations of daily living. Thus, the manuals instructed soldiers in jungle craft, including making shelters, cooking, combating malaria, and using bamboo for just about everything! Jeffreys’ third section returns to combat beyond the basic instructions. The British soldier learned about patrols, fire support, and the all-important skill of animal husbandry, especially useful for Chindits. Jeffreys concludes with a short but useful list of sources for further investigation.

The Jungle Survival Pocket Manual is a wee gem of a book for those interested in jungle warfare. Jeffreys includes lots of fascinating details for living and fighting in the jungle, and I know that the next time I take a mule for a trek through Burma I will have nothing to fear! That facetious remark is intended, however, to illustrate the biggest problem with the book; who is the audience? As a historian it struck me that this book didn’t tell me how the war was fought but how it should be, and there is an over-emphasis on Burma. As a wargamer, I wondered how much of this I could incorporate into my WWII games when commercial rules have veered away from realism to the abstract and sometimes just absurd. Nevertheless, this manual takes you inside the thinking of soldiers and commanders fighting in jungles and that can only add depth to our games in those theatres. For that reason, and the wealth of detail on jungle warfare, this book is highly recommended for WWII wargamers.