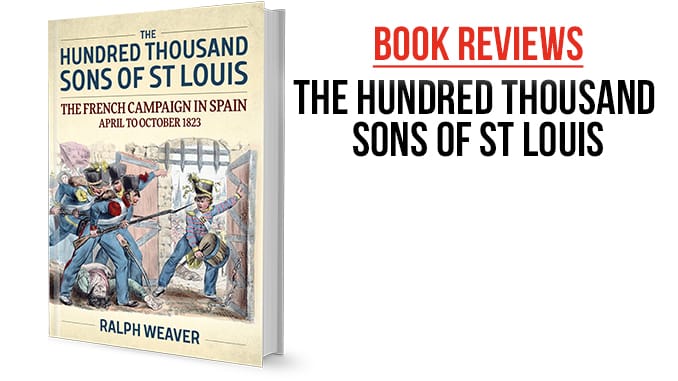 One of the small wars you might have missed, the French invasion of Spain during the Trenio Liberal (the “Liberal Three Years”) could be seen as an extension of the Napoleonic Wars, or as the beginnings of Europe’s big players carving up their spheres of influence in a new, absolutist era. Weaver’s book will give you all the details you need to know – and more.

When Spain in 1820 decided that it had enough of Ferdinand VII’s absolutist monarchy and imperial ambitions, the military seized power, reinstated the liberal constitution of 1812, kicked the butt of the Spanish Inquisition and overall behaved in such a way that royal eyebrows were raised all over Europe. Supported by Bonapartists and assorted European liberals, the Spanish faced internal opposition nonetheless, and after a general assent of Europe’s monarchies a massive army sent by the French Louis XVIII. This army, though not quite as strong as suggested, was known as the “100,000 Sons of St Louis”, evoking past glories and the absolutist spirit, while containing scores of battle-hardened Napoleonic veterans.

The war was over quickly, Ferdinand VII reinstated, the leaders imprisoned or executed – the confusing “Ominous Decade” following.

As said above, a small war, and maybe more interesting politically than from a military point of view – but certainly a conflict made for wargamers, who can pit colourful forces against each other, recycle some Napoleonic minis (the French liberals fighting for Spain apparently wore the uniform of the Old Guard), and are well served by Weaver’s book. As it contains everything you need, from the order of battle to uniform details and loads of contemporary illustrations (albeit not in colour).