The History of the Green Howards 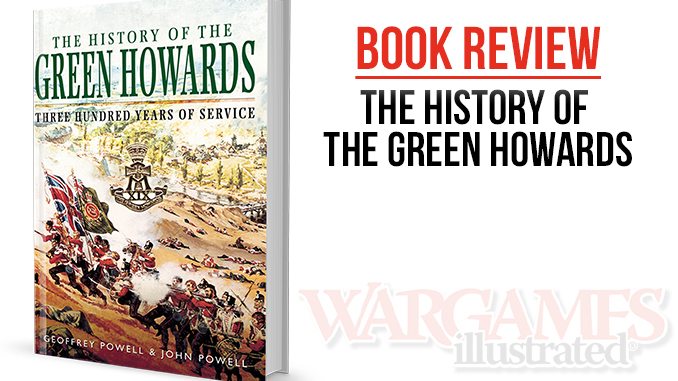 The History of the Green Howards
Geoffrey Powell and John Powell
Pen and Sword Military, 1992, revised 2002 and republished in 2015
Reviewed by Dom Sore

The History of the Green Howards is reissued a full thirteen years after the second edition, but unfortunately without any revisions or updates. The Green Howards themselves are now 2nd Battalion, The Yorkshire Regiment (Green Howards) and act as Mechanised Infantry. Incorporated in 1688, originally from independent companies in Devon, the Green Howards have fought in most of the major conflicts the United Kingdom has been involved in since. This book is written by an eminent father and son team of former Green Howards and weighs in at 316 pages. The text is interspersed with black and white pictures, while the colour plates are illustrative but stand alone. The final 35 pages cover the Appendices, bibliography and comprehensive index.

The extent of the research that has gone into the book is striking. For example, the details provided for refitting the regiment in 1709. Moreover, this is not a history concentrating solely on the major engagements of Alma, Ypres and El Alamein, but includes healthy coverage of all the Green Howards’ campaigns. Nor is this simply a history of the regiment’s battles, the details regarding more mundane tasks, like road building in India, are handled with aplomb. One of the appendices is a Regimental ‘Family Tree’ that lets you know where the various battalions and offshoots were stationed during their history, which is fascinating and full of useful information. It is interesting to note, however, that the author makes no mention of his own heroics at Arnhem where Geoffrey Powell earned the Military Cross; an engaging writer and humble hero!

As this is a regimental history it concentrates only on the performance of the regiment, leaving the reader somewhat disappointed at times when you want to know more about an action after the Green Howards left the battle. Also, one day I will find a book with clear, relevant maps, but this is not that book; the majority are simple maps of a geographical areas with no context such as the one for South Africa. This same map is faced by a decent map of the Battle of Paardeberg, so the frustration over the other maps is worsened. In addition, given the length of time covered there is expected brevity, but this is sometimes taken to extremes; for example, the book talks about a busy six months in Palestine yet covers the whole period in little more than one page.

This regimental history is well written and full of the information. There is no end of available wargaming opportunities from the beginning of the regiment and its early service in Ireland through to modern counter-insurgency operations, also in Ireland. The aforementioned six months in Palestine dealing with insurgency would provide suitable fodder for A World Aflame from Osprey Games. Spectre Operations or Force on Force would both be useful for wargaming the regiment’s service in Bosnia, and there is a particular bank raid the Green Howards undertook which would make a change to the normal games I play. If you have an interest in the Green Howards this is definitely a book you should have on your bookshelf.