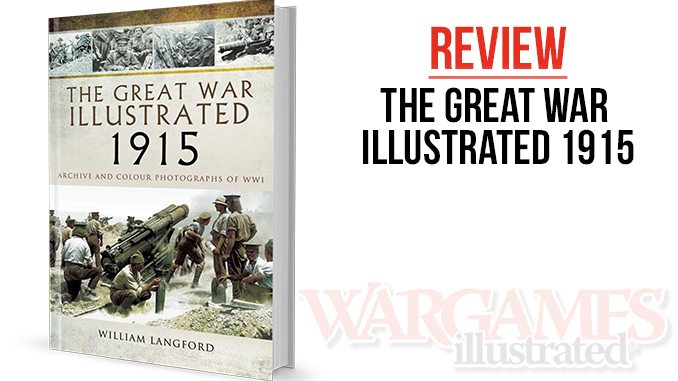 The second year of World War I sometimes seems to get lost among the hoopla over the mobile war of 1914 and the retreat from Mons, and the catastrophic attrition of 1916 at the battles of Verdun then the Somme. The year 1915 was, however, twelve months of high drama, innovation, and experimentation across a number of fronts and theatres. It was also literally and figuratively the year World War I became entrenched, creating the conditions for the terrible slaughter ahead. William Langford and Jack Holroyd in The Great War Illustrated 1915 capture the essence of that year, using over 1,000 photographs to tell the story. The result is a fascinating window into the conditions of that war and the men and women who sometimes gave their all for their countries.

Langford and Holroyd open with the war at sea. The major naval engagement took place at Dogger Bank, though that battle was overshadowed by the sinking of the Lusitania and naval operations in the Dardanelles. The latter was preparation for the disastrous Gallipoli landings, and the authors do not disappoint with many photographs of Allied and Turkish troops. Back on the Western Front, the first major battle of the year was fought at Neuve Chapelle, although it might come as a surprise to some to see photographs of Indian and Gurkha soldiers leading the assaults. This battle also introduces the viewer to the destruction caused mainly by artillery that was to become synonymous with fighting across the trench-lines. The Second Battle of Ypres brought gas onto the battlefield, prompting the Allied soldiers to adopt a variety of makeshift gas masks. Other oddities portrayed include a London bus stuck in the mud, the emergence of snipers and their aids, and a certain Adolf Hitler with his comrades. A colourized section follows along with some artwork and digital reconstructions. The war in the air receives some treatment too, especially the Zeppelin raids over Tyneside and East Anglia. Back on the ground, Britain recruited a new army to replace the one decimated since the war began. Moreover, the home front geared properly for war with a National Guard and women working in the factories. The final battle of the year was fought amongst the slag-heaps and coal mines of Loos. It was Britain’s turn to use gas in what was a by then all too familiar failed offensive – the photographs of dead horses are particularly poignant. The book closes with too propaganda pictures of Jesus Christ blessing the troops, one from either side, suggesting he may have been on both sides. Many of the tragic photographs in this book, however, posit not the presence of the divine but the complete absence.

The Great War Illustrated 1915 is nothing more than a collection of photographs, an album or even a catalogue, many of them culled from other Pen & Sword books. Nevertheless, the pictures are always informative and often fascinating. Military modellers specializing in the period will love this book. There is less for wargamers but the photographs illuminate the battlefield and highlight the combat experience and that is valuable for any historical wargaming period. Naval wargamers will be particularly impressed with the warships. Ultimately, this is a book to sit and enjoy and I highly recommend it.