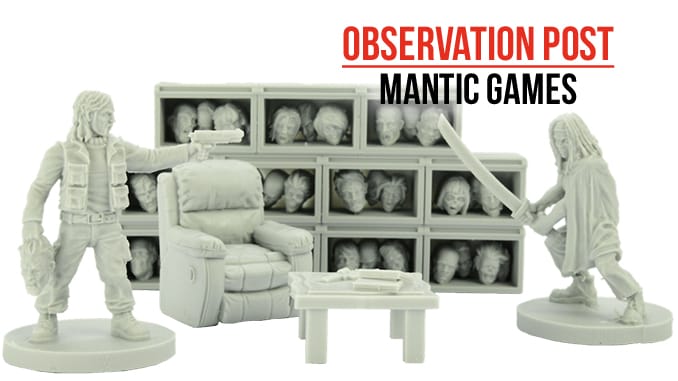 As well as providing more and more expansion sets for their The Walking Dead: All Out War Miniatures Game, Mantic Games often add collector’s sets in resin that add to the mythos. One of the most recent is The Governor’s Trophy Room.

This set of five miniatures is designed to re-create the moment from the comic book series where a vengeful Michonne returns to Woodbury to kill the Governor in his lair.

In addition to exclusive miniature versions of the Governor and Michonne, there are the mundane and macabre trappings of the Governor’s ‘viewing room’. A comfortable looking Laz-e-Boy style armchair and a low coffee table are here, with an incongruous looking revolver nestling next to two books.

These homely trappings are juxtaposed against the row of fishtanks that the Governor often gazes upon. Inside each tank are three zombified heads, which, in the comics, are the heads of his vanquished enemies, floating in water in their undeath. These are the grisly trophies that show the mental issues that lurk beneath the Governor’s façade.

The set also comes with gameplay character cards that enable the narrative-based scenario depicted to be played out using the core rules or add these versions of the characters to your gaming.

As always, this is a high quality Mantic product which accurately depicts a key moment in the Walking Dead comic book series. It also makes a great collectible for anyone with an interest in the game or comic book and sets another standard for others to match when creating similar products.