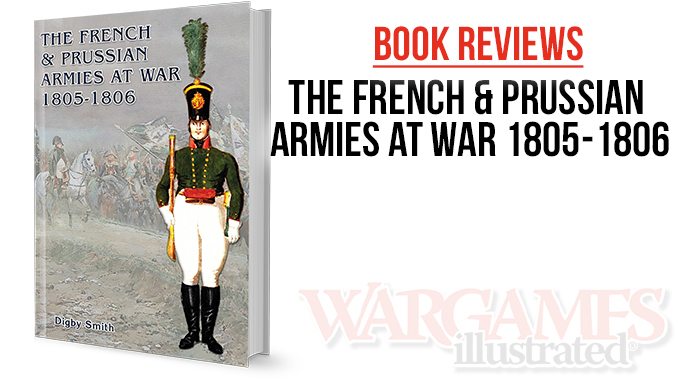 At the Battle of Jena and Auerstedt, 1806, Napoleon destroyed the Prussian Army. This was a disastrous event for Prussia, and led to much needed reforms in the Prussian Army. In this book, Digby Smith examines the 1805-1806 campaign from a more Prussian perspective than most English language historians. A hardback book of some 208 pages, it has two appendices containing the Orders of Battle for Jena and Auerstedt, a small bibliography, and a glossary.

The French & Prussian Armies at War 1805-1806 is a quality production, printed in a slightly glossy, heavy duty paper that allows for sharp printing and clear, full colour maps. The maps are also very useful, providing wargamers with starting positions for the two main battles and ideas for other scenarios. The descriptions of the campaign and battles are handled well, and the chaos, confusion, and lack of discipline within the Prussian Army is suitably highlighted. Digby Smith is also careful to highlight where the Prussian Army did well, although this is generally shown in the performance of individual regiments, like Infantry Regiments von Grawert Nr 47 and von Zastrow Nr 39 in front of Vierzehnheiligen. The most useful part of the book is, however, kept to last; the orders of battle for Jena and Auerstedt, where you get the named regiments in each brigade.

Strangely, the contents page does not provide page numbers for the various chapters and appendices, making it harder to find the referred page. The lack of an index also hinders using the book as a reference because while it is mentioned in the contents page, it does not appear in the book! The organisation of the two armies is covered well, yet I think tables showing the breakdowns rather than simple paragraphs would greatly improve the reader’s understanding. The maps are good, however some of them are missing some small details regarding which force they represent, which is a shame and I would have liked them to be larger, these are minor gripes though. There are some errors on the maps but they are minor in the grand scheme of things. The biggest issue is around editing, or lack thereof, typos and contradictory information abound and it ruins what could have been an excellent book.

The French & Prussian Armies at War 1805-1806 is a book that feels, looks, and reads as high quality, the author certainly knows his onions yet has made errors. It feels like a rushed first draft rate than a finished article and that is a shame. This is still an enjoyable read that should provide the wargamer with sufficient detail to refight the battles of Jena and Auerstadt using their preferred rule sets. The gamer will need to do further research to check details and get things correct. Although the Prussians were hampered by poor leadership, as so many were in this period, you cannot do worse than the generals of the time. The Prussians will need “victory” conditions that minimise how badly they are defeated rather than beating the French. Auerstedt in particular could make an absolutely magnificent Black Powder game for a club day game with many players. Smaller scale figures using a ruleset such as General de Brigade are even more suited to these battles!