The Forgotten VCs. The Victoria Crosses of the War in the Far East During WW2 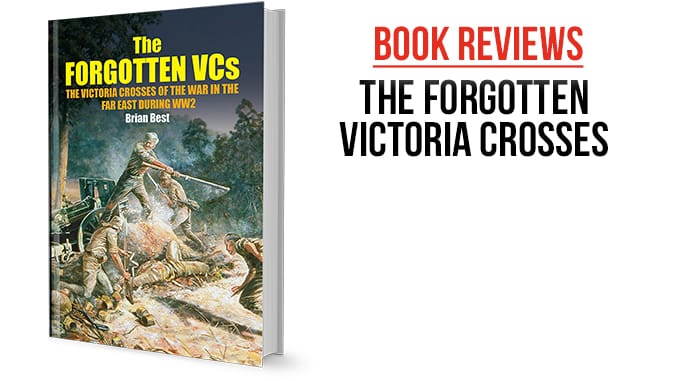 The Forgotten VCs. The Victoria Crosses of the War in the Far East During WW2
Brian Best
Frontline Books, 2018
Reviewed by Neil Smith

In The Forgotten VCs. The Victoria Crosses of the War in the Far East During WW2, Brian Best takes his readers deep into the jungles of southeast Asia to tell the extraordinary stories of men who won the ultimate accolade for their efforts, sometimes posthumously; the Victoria Cross. In doing so, Best fleshes out and humanizes the often bloodless operational histories that cover that ‘forgotten’ theatre.

Best opens with brief glossary for terms used in the British and Indian armies. He then sets the scene with a useful overview of the competing armies before launching into the narratives of various campaigns and the men who earned Victoria Crosses. Each chronological chapter begins with a summary of the campaign followed by brief biographies of the Victoria Cross recipients and the actions that brought them their official recognition. Thus, Best guides us on a journey through the jungles of Malaya and the fall of Singapore, and on into the ignominious retreats of 1942 and eventual crushing advances two years later that swept the Japanese from the region, bringing an end to the war. Along the way, Best recounts the travails of the Chindits, the stunning victory at Imphal, and the savage and desperate fighting at Kohima. He concludes with a chapter on Australia’s war, including accounts of some more Australian Victoria Crosses won in other sectors of the Pacific, and a brief but useful bibliography.

In The Forgotten VCs Best makes us aware of the sometimes unimaginable sacrifices made by empire and Commonwealth servicemen who shared the burden of fighting as British allies, among them Indians, Australians, and Ghurkhas. His book is also a valuable reminder of the multiple methods of waging modern wars: Victoria Crosses were awarded in the air, on land, on sea, and sometimes under it. Best’s stories of individual heroism are successfully manipulated into the broader narratives, providing an informative historical framework, and he helpfully adds some individual context to the lives of these heroes, though not all had happy endings. I had a few niggles at some of the over-lengthy quotes Best deploys to describe actions when he seems to be doing perfectly well without them, and there are a sprinkling of annoying typos and repetitions that could have been easily swept up by more careful proofreading. Nevertheless, The Forgotten VCs is an excellent addition to the canon of work emerging on the Burmese theatre and a boon for military historians and wargamers alike. And the next time you are in a seemingly dry and dusty museum, looking at wee bits of metal on ribbons, books like this will help you see the incredible people and stories that they represent.