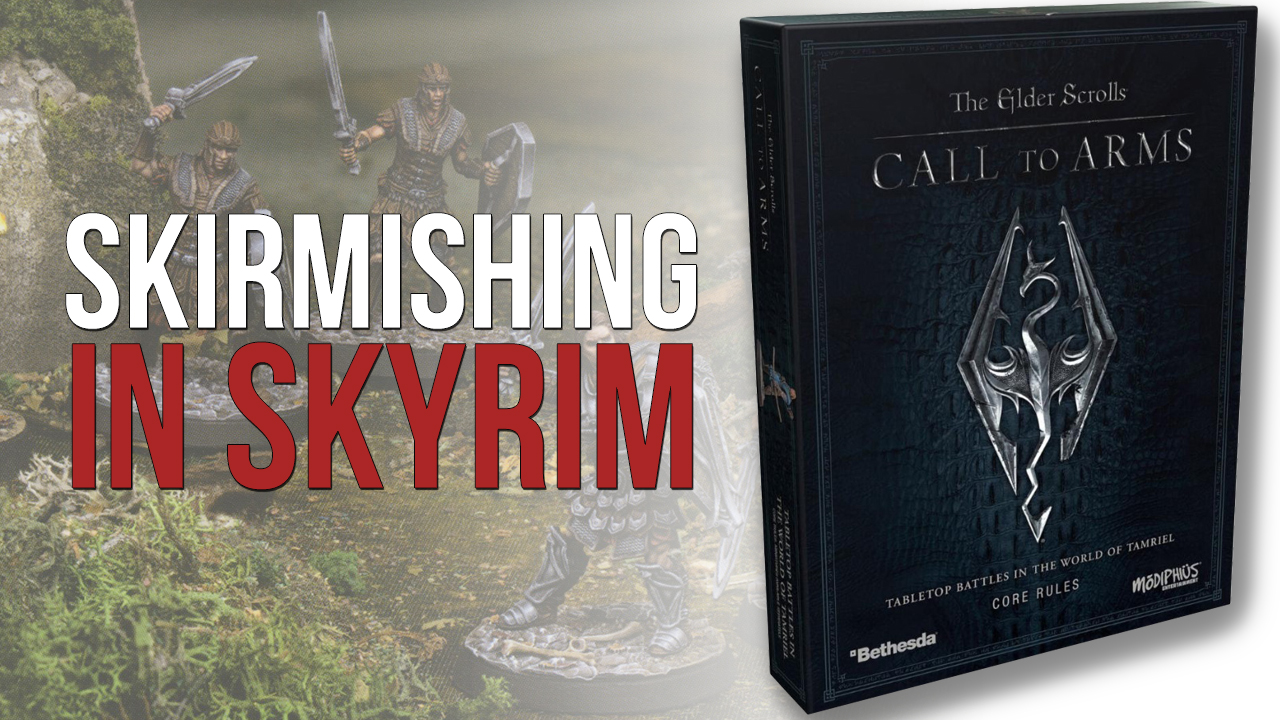 The Elder Scrolls: Call to Arms is a miniatures game based on The Elder Scrolls video game franchise by Bethesda Game Studios and is set in the same world of Skyrim, so it will be familiar to anyone who has played the video game before.

Note: The text below is the transcript of our Unboxing video (for those who would rather read than listen).

The game comes in a sturdy A4 box and contains a quick start guide, a 100 page rulebook and a 40 page book of quests, or scenarios. Also included are two A4 sheets of card counters, 13 custom dice, 5 Hero Cards, 13 follower and Monster stats cards and more than 200 other cards used for spells, weapons, equipment and events. As you can see, the game is full colour and the production quality is excellent, with some lovely artwork used to illustrate the items on the cards and throughout the books.

The fifteen page quick start guide is a great idea, introducing players to the basics of the game and letting them start playing by page 11. The larger rulebook might be a bit intimidating for those new to skirmish wargames whilst this easy to follow tutorial lets them learn the basics and get playing straight away. It walks the new players through the basic system and ends with a scenario, “Escape the Dungeon”, to use as a play through.

The main rulebook is well presented and illustrated with diagrams and examples of key rules such as movement and combat that makes them easy to follow.

The game is played in two different ways. “Battle Mode” pitches your hero and their followers against another player with his band of trusty warriors. In this mode, the number of heroes and followers a player can have are limited by a points system to keep the games fair.

In “Delve” mode you play a hero exploring a dungeon and recovering treasure. This mode can be played solo or with a group of players, each of whom plays a hero in co-operative play against undead monsters who are controlled by a clever AI system.

Each Hero has a “Hero Card” detailing their stamina, health, magic power and so on, that is also used to identify what the hero is equipped with. Players place the weapon and armour cards next to the hero card to show what he is carrying, and can also equip their hero with cards showing magic items and potions. This allows you to customise your hero, switching weapons and armour around for different games.

The hero’s followers are not so detailed, having a card that records all their stats and equipment in one place, but they are just the supporting cast after all.  Your basic heroes can be wizards as well as warriors, gaining access to spell cards that allow you to blast your enemies with flames or heal your friends, amongst many other options.

The basic game play will be familiar to anyone who has played these sorts of small scale skirmish games before. Players take it in turns to activate one of their miniatures who can then make two actions, such as move, shoot, fight, hide and so on. When the player has completed his actions, his opponent then has the opportunity to activate one of his or her miniatures. The turn ends when all miniatures have been activated.

What makes this game different are the special dice rolled to successfully perform any action. First of these is a white dice, numbered one to ten but with additional critical hit and fail faces too. This dice is rolled to perform actions such as hiding, unlocking a treasure chest or fighting. It is usually rolled with one or two of the green dice, which have faces numbered minus one, minus two or minus three. These minuses are applied to your white dice roll and compared to the target score needed to succeed. If you score greater than the target number, you succeed. If your trying to shoot someone with a bow or hit them in melee, you now roll a number of the remaining coloured dice to wound. Depending on your skill and the weapon your using, you will roll one, two, or three of the different colours, with yellow dice being the least effective, through red, to the more deadly black dice.

If you’re wielding a two handed weapon, for example, you roll a red dice and you can roll additional dice by using special abilities or magic. The person being hit rolls a dice of the colour dictated by his armour to reduce the damage caused, which is usually a yellow dice for monsters. Whilst Heroes have a number of wounds, most monsters can receive only one point of damage before being removed, allowing your hero to take on multiple opponents, as heroes should.

The rest of the rulebook covers special abilities, magic items and spells, and has useful quick reference charts at the end.

The rules are clearly written and the rulebook is well laid out making it easy to find the sections you need. However, there is a lot to remember in every round, with special abilities, magical items, recovered stamina and magic points as well as keeping track of who has activated, and it may take a few games before players master the intricacies of the Call to Arms system.

The third book features scenarios, ranging from dungeon delves, raids and sneak attacks to stand up battles, as well as a system for creating your own quests. The authors have worked hard to create what they refer to as a “story driven narrative”, rather than just being a straight fight between one group and another.

Event Cards are used to introduce random events into the game, whilst each player has an additional objective to achieve as well as those listed for the scenario. A further fun feature is the possibility of monsters appearing, either as a result of an event or as part of the scenario. The monsters card has a table of possible reactions that are decided by a dice roll, making it retreat, attack or take cover. This is a neat little system that harks back to the Elder Scrolls computer game roots, but it allows solo play and also makes monsters behave a little more realistically than just attacking every time.

Overall, the game is not a quick one to pick up and play. There are a lot of rules to remember and there are quite a lot of markers and counters going on as Stamina is used and regained and magic points are played. However, the designers have clearly gone to a lot of trouble to get this system right and I think it will reward those who stick with it. There are lots of guides to how to play the game online and there is plenty of support on the Elder Scrolls website which should iron out any problems.

If your looking for a small scale fantasy skirmish game with a high role playing aspect, look no further.