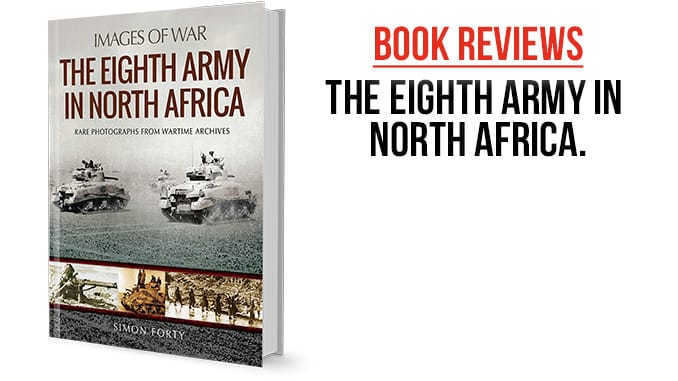 To put it like John Miles, the North African campaign was my first love and probably will be my last. The campaign ultimately got me into scale modelling and wargaming. So over the years I have read a lot of books on this particular campaign and researched many photographs in the process. Hence, I was really looking forward to be able to review Simon Forty´s new book “The Eighth Army in North Africa” which was published as part of the Images of War book series by Pen & Sword. These books cover a particular battle, campaign or vehicle and are intended as a primer on the subject drawing on mostly unpublished photographs and maps. Given my history, I wasn´t really expecting to find anything new in the book.

How wrong I was! The 144-pages strong book consists of an introduction, seven main chapters and a chapter with recommendations for further reading. The book is lavishly illustrated with many rare photographs that I haven´t seen before. In addition the book contains several Orders of Battle as well as a number of maps. Unique features of the book are armor penetration and effective range charts along with a comparison of the artillery capabilities of the combatants. All illustrations are well laid out and the resolution of the photographs has been enhanced; their captions are also enlightening.

The accompanying text gives a brief overview on the prevailing natural conditions in the theatre. The North African landscape is described as well as operational and tactical aspects of fighting a war in the desert. Also, the opposing forces are introduced. Then major events of the Western Desert as well as the Tunisian campaign are described in chronological order.

I really enjoyed reading the book and flipping through the pages for the photographs and charts. It is well worth it´s price and can be read during a lazy Sunday afternoon. However, I have to raise one issue here: the space dedicated to the Axis forces in the book. The Images of War series has books on Axis forces and a general campaign description. The title suggests that this book only covers Eighth Army in North Africa. Yet many pages are devoted to Axis tanks and vehicles. I acknowledge the fact that an introduction of the enemy forces is necessary so that the reader can appreciate certain facts but in my opinion these pages could well have been used for even more great pictures or charts on the Eighth Army. But in the end that is a matter of personal preference and I can recommend the book to every wargamer with in interest in the campaign, not only as a primer but also as a worthy addition to every library.

Edward the Elder – King of the Anglo-Saxons, Forgotten Son of Alfred