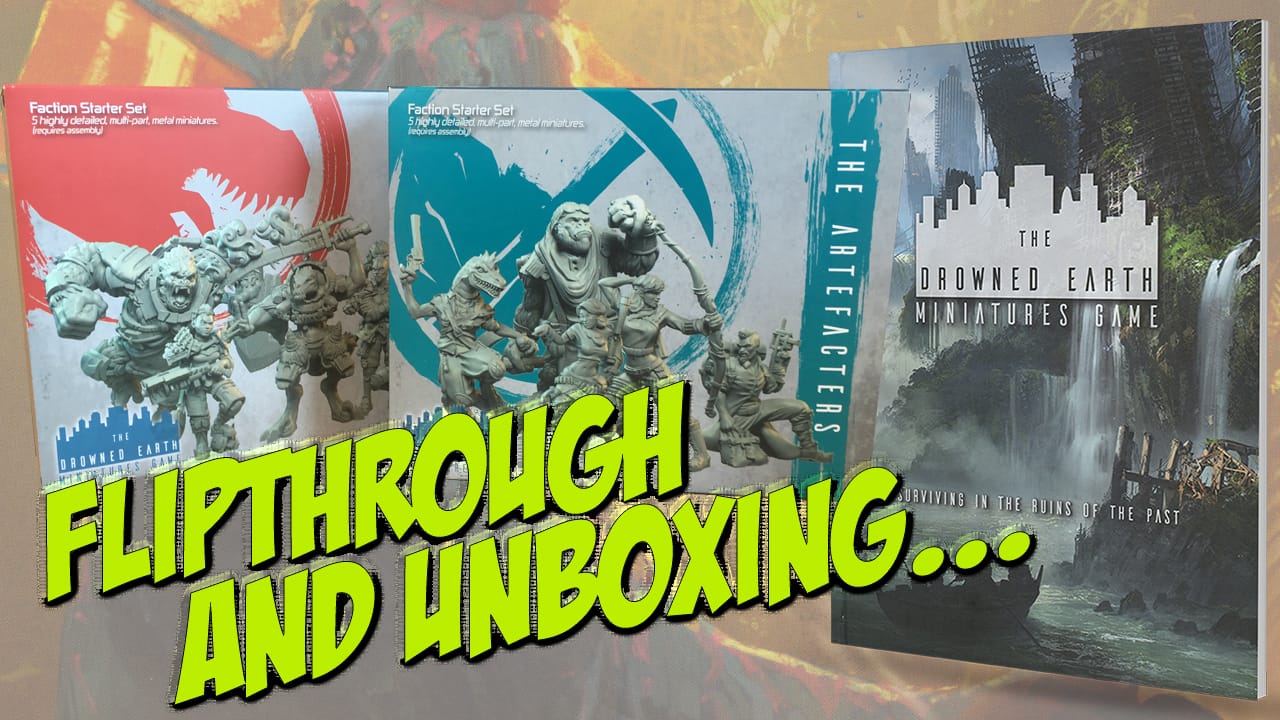 The Drowned Earth Miniatures Game from Olmec Games is a skirmish level game set within the confines of a post apocalyptic world, one where the waters of the world have claimed much of the surface. Each Faction outlined in the background has a starter set of miniatures to represent it, with plenty of single miniatures which can be used to enhance each force

The rulebook is of a high standard, and begins with an outline of the main rules. The game uses cards for each miniature, with a profile for each, an outline of the various attribute and other tests made on two ten-sided dice (Attribute and Feat dice), force creation, the structure of a turn, and the actions and reactions process, which makes for a fluid, fast moving game.

is this fluidity more ably shown than in the Movement Action section, where players may move in three different styles, Normal, Restricted and Dynamic. The diagrams showing examples of movement are very clear, a particular feature of this lavishly colourful book with photos , clear layout and a combat system with real style. The ‘Action/ Reaction’ system outlined also makes this a less passive experience for all players.

An element of role playing and character variation is offered by the rules for skills and abilities. The cavalry and beast rules offer more variation to the game, and the usual line of sight rules are present but complicated by the varied terrain found within this post apocalyptic world.

Force creation is largely based upon two styles of scenario, either Competitive or Narrative. There are elements of tournament play here for those who want it, whereas the narrative side is covered for those wishing for a more adventurous experience. There are five scenarios, all outlined in plenty of detail, and optional rules that can add wrinkles to each one.

The remainder of the rulebook outlines a whole world, from economics to races, geography to technology, a rich and varied location for game settings and adventures. This is a fairly unique world, a fully realized post apocalyptic world that has clawed its way back to civilization amidst the remnants of a world re-formed by the chaos and deluge of something known as The Event. There are various races and Factions outlined, present across the world and vying for dominance or survival.

These Factions include the Artefacters, groups of explorers who seek out the riches of the Pre-Event world, and the Bondsmen, bounty hunters who will bring you down for cash.

The Artefacters starter set consists of five miniatures, three humanoids, a lizard creature and an ape. Each is cleanly cast in metal and is armed and equipped with various weapons, from the bow and hand weapons of the main female and the genetically enhanced gorilla, to the large caliber handgun and SMG of the saurian and the male human respectively. These are the searchers, the plunderers of the past, using them for themselves or selling them to the highest bidder.

The Bondsmen reflect the same spread of races and genders as the first, two female and one male humanoid, a gorilla and a saurian. These figures are more obviously organized and equipped for combat, with areas of armour plating, and vicious looking weaponry. The enraged gorilla is perhaps the best figure here. These are people who make there living hunting people down, for a suitable reward and without mercy.

The rulebook and the miniatures are of a high quality, with a different take on a post apocalyptic world. Yet this is a set of rules that pretty much guarantee a fast moving gaming experience where every die roll or decision matters. If you’re looking for a dynamic system with some tight gameplay and a new world of adventure, this Drowned World could be what you’re looking for.