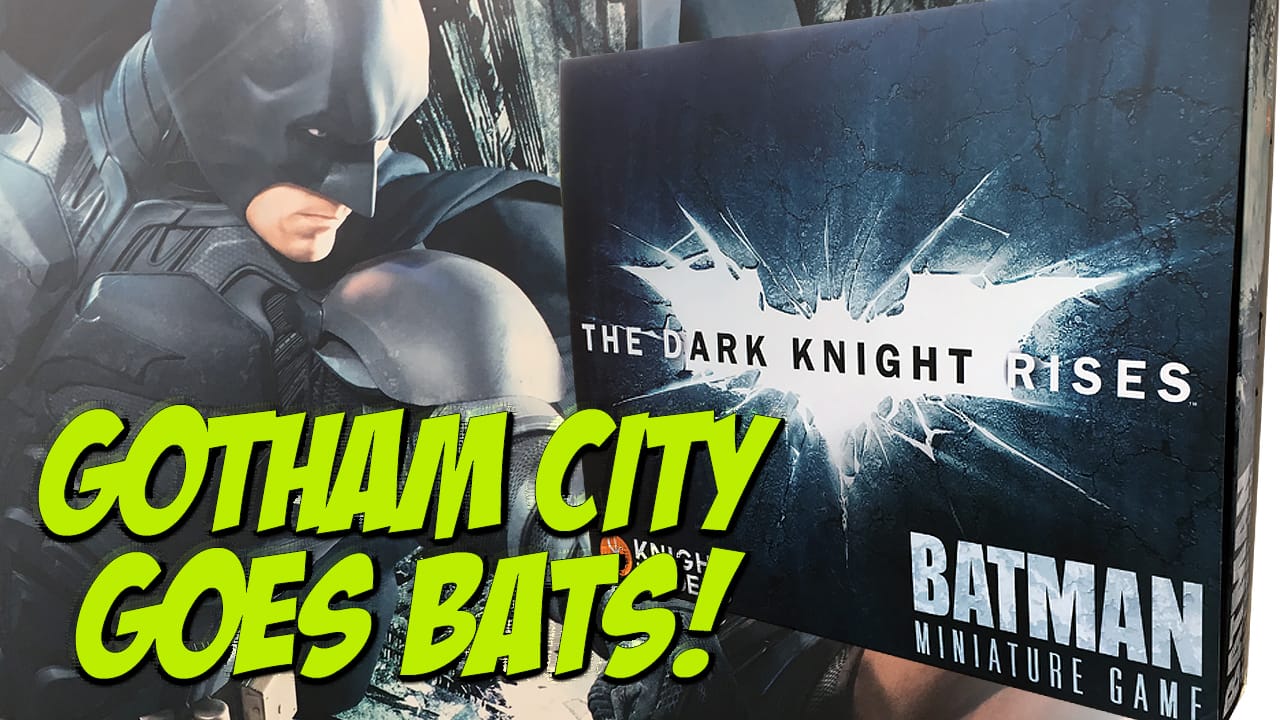 The amazing Knight Models have added a whole new game to their Batman Miniature Game licence. The Dark Knight Rises: Batman Miniature Game charts the battles between Batman and the League of Shadows, with Bane to boot, and contains new miniatures and streamlined, fast play rules, plus much more.

Once you remove the slipcase, take the time to appreciate the artwork on the box, and lift the lid, you first come upon the ‘Fast Play’ rulebook. This is a 65-page softback book which is easy to access, uses plenty of textual and pictorial examples or play and has some great artwork and images of painted miniatures. These are actually the core rules, extracted from the much larger hardback rulebook, but condensed down for ease of use and with some updates to aid with playing speed. Directly beneath the rulebook are two double-sided quick reference sheet, which is a great way to get straight into the game without having to refer too often to the rulebook.

Moving on to the various components for the game, we find the game aids and punchboards with the tokens and markers, plus the parts to construct two full colour buildings to add a 3D element to the game. The evocative artwork and styling is very ‘Gotham-esque’ and really add to the game.  The tokens, templates, markers and building parts are all double-sided, and are printed upon durable, heavy gauge card. A 3’ by 2’ folding playmat is also included, which is again full of great artwork touches that really help set the scene – this is a dark, brooding, violent city, where the caped crusader is the only real justice left.

Upon lifting a protective piece of foam, we come to the all-important miniatures, based upon the movie and comic book characters any true fan will recognize.   These 35mm miniatures are up to the usual exceptionally high standard we’ve come to expect from Knight Models, being highly detailed and cast in a pretty durable resin. There are some great characters here, including Bane, Batman and a number of League of Shadows and Gotham City Police Department cops. However, there are also some more unique sculpts, such as two versions of Catwoman, standing and posed as a passenger or rider for the Batbike, which is also comes with a special Batman figure (that’s two Batmen for the price of one!), the excellent Tumbler Batmobile and, my favourite from the movie, a version of Michael Caine’s Alfred.

Also included are the game cards for the characters and their various gadgets, adding even more ‘flavour’ to the game.  The last items are the standard D6 dice, giving you all you need to get gaming from the outset. All of these require some assembly and come in ziplock bags inside an plastic tray inlay with suitable gaps for the miniatures and enough space for all the components to be carried around in the box from gaming session to gaming session.

This is a top quality product, with high production values and a real effort to evoke the atmosphere of the movies, comics and Gotham City during the dark times depicted. An impressive boxed set, which shows what can be done by a great group of designers and manufacturers.