The Curse of Dead Man’s Hand 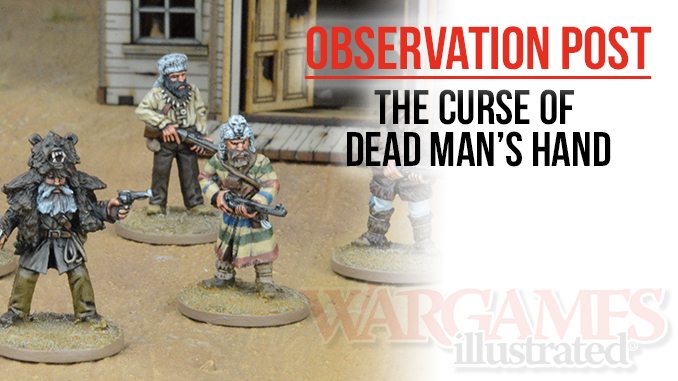 As Great Escape Games build up to the release of the latest sourcebook for their Wild West skirmish game Dead Man’s Hand – The Curse of Dead Man’s Hand – we take a final WIPrime look at some of the new figures and buildings for the game.

These first couple of figures represent quite an unusual variant on the undead; zombified animals!

The first is a zombie bear, a gruesome and ferocious creature modelled after a Kodiak or Grizzly. These creatures are dangerous to man at the best of times but one can only imagine how zombification will have changed this one’s demeanour! No doubt raised from the dead by Dark Magic, who knows what can be done to vanquish this fell creature?

Next is a Storm crow, a zombified large bird that appears to ‘flap-shamble’ (yes, that’s a new word!) across the ground. It is based on the legendary Native American Thunderbird. Does it do its own bidding or that of the entity which returned it to life?

Back to humanity now, although still with the demonic undead. Our next miniature comes from one of the forthcoming new gangs for Curse. He’s a skeletal undead cowboy, still armed with a sixgun and looking for souls to harvest! That grinnin’ skull would be enough to put even the most hardened gunfighter off his aim!

This last miniature is very much alive, totally barking mad perhaps, but alive! Typical of the Mountain Men of the period, this feller is clad in buckskin leathers and wears what’s left of a bear as a headpiece. That glint in his eye says you better stay on his right side, especially given the six shooter and skinning knife combo! Beware he doesn’t decide to wear you as a hat at some point in the future…

To accompany The Curse Great Escape Games have teamed up with 4Ground, purveyors of fine quality MDF products, to produce a range of new buildings for the game.

The buildings are a variant on those already produced in the 4Ground/GEG Wild West range, with each new one being suitably ‘distressed’, with broken corners or damaged sections, to give your Western town that ‘it’s hard to get anything fixed when there are marauding zombies about’ look.

These are just some of the revelations that are still to come for The Curse of Dead Man’s Hand. There’s still more horrors to see and heroes and villains to view. We will be covering the game itself in more detail via ‘Rules Showcase’ in a forthcoming issue of the magazine and providing a ‘flip-through’ of the rules via WIPrime.

Until next time, keep that sixgun handy and beware the sound of the ‘flap-shamble’!