The Byzantine Art of War 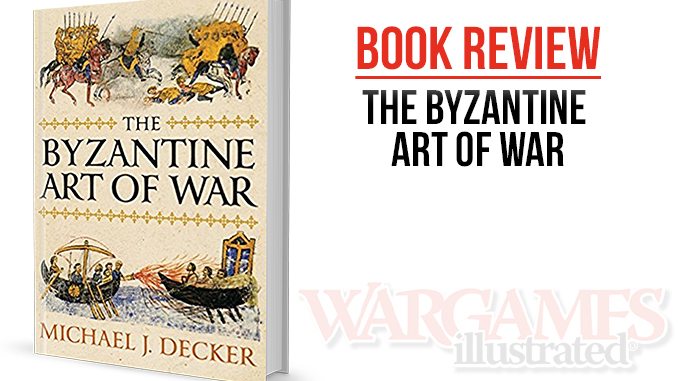 Michael J. Decker is Professor of Byzantine History at the University of South Florida and his book, The Byzantine Art of War, is an impeccably researched and annotated book that covers the Byzantine art of war from the founding of Constantinople in 330 to The Fall more than 1100 years later. It runs to 267 pages, including index and notes, has numerous illustrations, a number of battle diagrams, and 11 maps. The bibliography is as extensive as you would expect.

The Byzantine Art of War is thematic, pun intended, and contains chapters on the historical overview; leadership; organisation, recruitment and training; equipment and logistics; strategy and tactics; enemies; the army at war, and the art of war. Each chapter covers the entire period so you get all the changes in organisation for example, set out with some reference to the other chapters but essentially standing alone. This allows Decker latitude to cover each topic without being concerned that the changes and timelines in different aspects line up neatly.

The chapter on the army at war is one of the best as it has diagrams of some of the battles, showing how the Byzantines fought. It also sets out to explain not just how they fought the way they did but why, and how this varied against different opponents. For those thinking of building a Byzantine army, the chapter in enemies is particularly useful as it sets out the major enemies of the Empire, how those enemies fought, and how the Byzantines adapted to each of them. This is an Empire that fought just about everyone at one time or another; large hairy infantry like the Goths and Rus; refined Sassanian Persian cavalry with a history going back a millenium; fanatical Arab jihadi; uncouth Normans; shifty Venetians; and a horde of nomadic Steppe tribes over the centuries. It did so by co-opting their methods and often their manpower and survived despite everything stacked against it, and Decker shows how they managed it.

There is little wrong with this book, other than a minor quibble that Decker keeps referring to “the Dark Ages” a term with no meaning within the Byzantine Empire, which is particularly odd as he stresses the continuity from the Roman Empire. Decker also has the unfortunate tendency of historians to not use wargaming terms but these are usually easily converted or deduced.

As a book this is a good primer for the Byzantine army as a whole and also acts as a brief introduction to the history of the Empire, but it does cover more than a millennium and a host of allies and enemies. In consequence, it is broad rather than deep, though there is plenty of detail for the casual reader. I’m not sure how much use it would be to the many wargamers, myself included, who sometimes choose armies based on figures or lists they like. It is however a very well researched and written book and is worth reading for anyone with an interest in the Near East or Eastern Mediterranean during the period.