The Battle of Waterloo With 2,134 Lego Minifigs 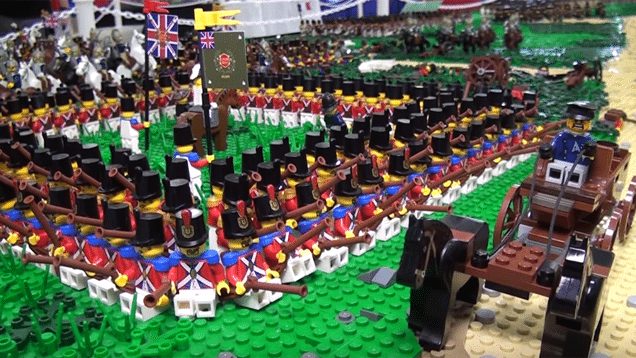 The Battle of Waterloo, where Napoleon was defeated by an Anglo-allied force and the Prussian army, was fought 200 years ago. To commemorate the anniversary of one of the most famous battles in history, a group of LEGO enthusiasts decided to make a blocky version of the battle, as big and accurate as possible.

It’s a huge build, with 2,134 minifigs, but it’s not just soldiers piled up on a bunch of green base plates. Their build is well-researched and historically accurate. It features proper formations, uniforms, mini-events and even certain famous soldiers, as it all allegedly happened 200 years ago.

Since none of the official LEGO sets are really about the Napoleonic wars, they had to use hundreds of custom and rare minifigs to properly represent the uniforms of all the various infantries and cavalries. Here are some closeups where you can see them:

[Images via Beyond the Brick]

And here’s the full build:

Beyond the Brick did a really funny interview with Gary Brooks, one of the creators, where he talks about the battle and its heroes, and how this impressive diorama came to life: