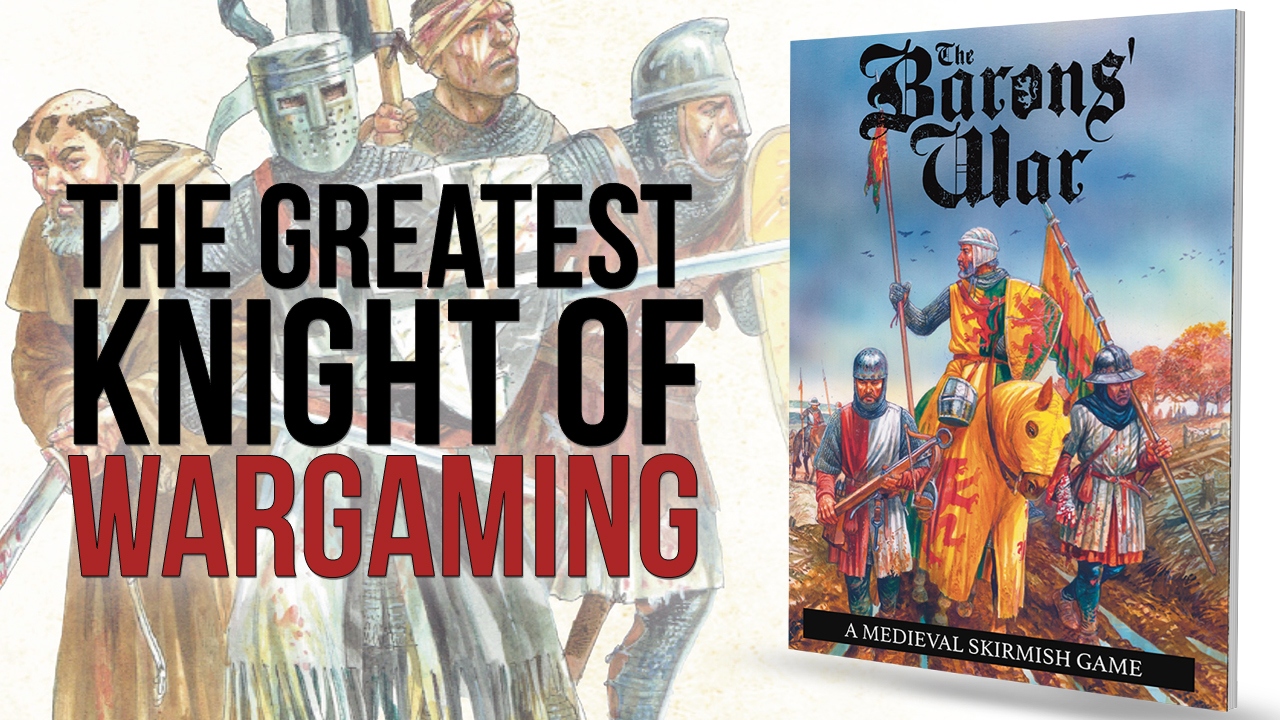 The Barons’ War is a new rulebook written by Andy Hobday and published by Warhost.

In build, it’s almost pocket sized (if you’ve got large pockets) and tightly bound with a softback cover. This format is slightly controversial as it doesn’t sit open for reference on the gaming table, but it does make for a handy armchair read, and I was immediately excited to see an index at the back of the book, which helps considerably with in-game reference.

The wrap around cover features a great Peter Dennis illustration which serves to set the scene – that being 28mm medieval skirmish set during the turbulent years of the First Barons’ War of 1215 – 17.

In the forward and introduction the author points out that he has “traded acute realism for simplicity and fun” and that the Barons’ War ‘project’ will be supported and expanded online with evolving rules, new periods and scenarios etc, author Andy being very active online and someone we can trust to keep flying the flag for The Barons’ War, which, it should be noted, is supported by an excellent range of figures from Footsore Miniatures.

Following a brief guide to the historical Barons’ War and our first introduction to one of its stars – ultra conservative William Marshal – who has been the subject of much popular historical attention over recent years – we are presented with ‘What we need to play’ and it is worth lingering here for a moment whist we take in the components that make up a game of The Barons’ War.

Page 11 provides a very useful list of the 10 principles of the game.

More useful basic information is imparted on page 12, where we are informed that “modified dice rules” are used in the game, and groups or units make combined dice rolls i.e. a player rolls five dice collectively for a group of five spearmen when they attack.

The Rule Conventions chapter continues with notes on ‘Line of Sight’ and ‘Hindering’.

Here ‘Hindering’ gives us a clue as to the level of the detail covered by the rules. For example “If a warrior lies in the path but not all the way across to block Line of Sight then they are only hindering the shot or charge” – so you will get the impression from this kind of detail that The Barons’ War is a micro or one v one skirmish level game.

The next section of the rules is ‘Miniature Warriors and their Groups’.

Groups are designated as figures of the same type in units of a minimum of three models, interestingly there is no upper limit. So, we are talking groups of spearmen, groups of knights, groups of bowmen etc, these groups collectively form a Retinue.

Group coherency, defines a group as needing to be within 2 inches of a central infantry figure, as noted by the diagram on page 18. Incidentally, this very clear and useful style of diagram is used throughout the rulebook.

Warrior attributes or stats are described next. These reference:

In the next chapter we are into the ‘Game Round’.

Who goes first each round is determined by the roll of a dice, which can be adjusted by various factors. There is then some admin to attend to with regard Morale Dice and Compulsory Actions, before players are then allowed to carry out New Actions.

Generally speaking a group gets to make one action per round. This action could be Move or Combat etc. Carrying out an action may lead to a rival group making a Reaction. Once a group has carried out its action (or chosen not to) play passes to a group under the control of the opposing player to make a similar choice.

Compulsory actions kick in before any chosen action. These include dealing with Broken and shocked groups, or groups who Hate or Fear their enemy.

Rallying is dealt with on page 26 and is a pretty standard fare, with the ‘Weary’ rules being covered on the next page. In The Barons’ War groups become become weary if they run, become Shocked or are Rallying etc. A token is placed next to the unit and they suffer certain negative consequences.

It’s worth mentioning the token heavy nature of the game at this point. The rules provide a very nice copiable sheet of tokens at the back of the book and these will be liberally spread around the tabletop during the game – great news for tabletop token lovers, less so for the haters.

Up next is the Combat section, which deserves more of our attention. Although again this begins with pretty standard rules explaining how Attack and Defence values work  – i.e. you need to roll above your stat to score a hit or defend a blow.

It’s interesting to note that The Barons’ War makes an effort to combine all combat – ranged and melee – under one umbrella set of rules.

The instructions which run from page 34 to 39 do a good job of explaining a complex procedure which begins with the attack being declared, takes in some heavy detail concerning movement and line of sight, morale considerations and which models can strike a blow, that’s before players start rolling dice to hit each other.

All attacks can be batted off by either an initially successful Defence roll, or secondly, a Shield aka Save roll. The defender may have chosen to Return Fire or Attack Back which will mean they get a chance to clobber the opponent before moving to ‘Combat Resolution’, which takes in being Forced Back, Regrouping and Morale Checks.

This section ends with considerations on how all that proliferation of terrain on your tabletop might affect combat.

Morale is the last of the ‘big rules’ chapters, explaining why and how Morale is a factor in the game. The most interesting point here being the way the Morale dice – placed next to each group – is utilised. This is best explained by looking at the example on page 46 –

Rules for Fear, Hatred and Berserk are then covered – for you 40 somethings these are comfortably reminiscent of the early days of Warhammer Fantasy Battles.

Building your Retinue is the Army List section of the book, beginning with the basics of what a Retinue is, how it is made up – including points implications – and Experience. Experience introduces four level of ability: Veteran, Regular, Irregular and Green.

Then the lists and statists proper begin.

Taking a close look at Knights – by way of example – we can see the aforementioned stats for Movement, Attack, Defence, Morale, Actions and Points – the game designers choosing to test our maths with points scores of between 17 and 24 for a single knight! Abilities, like Chivalry and Live by the Sword, are special rules that apply to the group.

Below this we can see standard equipment and optional equipment available to our knights – a list of weapons and armour and the associated cost e.g. +5 points for a large shield, which provides a +7 Save.

Moving through the list of troop types, you will see Sergeants, Crossbowmen, Bowmen, Spearmen, Militant monks – which is a clever addition and could also be used for the Oxford Students who fought for Simon De Montfort in the 1260s – and Levy. All similarly laid out in a clear and concise manner, with some nicely painted examples to boot.

After the warriors of the retinues comes ‘Command Groups’. A commander is assigned to, and fights with, any group in the retinue, however his statistics, abilities and equipment differ from the other members of the group. He’s generally superior and is the archetypical ‘character’ figure in a skirmish game.

Up to half of a players total points can be spent on Commanders, so that’s potentially a lot of ‘bosses’ on the tabletop at any one time.

Characters like this Baron, can be upgraded further by adding better weapons, armour and abilities and there are options for Lords and Mounted Sergeants.

This section of the rules concludes with a ‘Build a Bear’… sorry, no … ‘Build a Baron’ chapter, with rules, profiles and stats for creating your own bespoke commanders.

Somewhat hidden here are the rules for how command affects the game – with rules for how a commander can add extra actions to a group within his zone of influence.

More lists and stats and associated rules cover the way in which different equipment effects the rules of the game, including those for horses – of which there are three different types to use in-game.

We mentioned ‘Abilities’ earlier when discussing the Knight’s profile and over these next ten pages you will find associated rules for using them in the game, and lengthy lists of the different ones on offer which can either be purchased or are Inherent. The Game’s developers clearly had a lot of fun here coming up with imaginative Abilities like Born for War or Wolfhound.

A fascination for this short period of English history proved the springboard for this set of rules, and in this next section of the book the author gets to extol his enthusiasm for The Barons’ War by presenting playable characters from the conflict, complete with succinct descriptions, profiles and more gorgeous photos of figures. A section in which the recently styled ‘Greatest Knight’ William Marshall looms large, although at Wargames Illustrated we would like to point you in the direction of the much more virtuous Merry Men – our local Nottinghamster heroes.

The penultimate chapter of the book covers Scenarios, and is introduced by this text –

“We have created The Barons’ War to be a skirmish game where taking the time to choose a scenario and set up your battlefield, are both key factors to the quality of the game you will play.”

It is clear from what follows that the game’s developers have put a lot of thought and effort into how The Barons’ War can best be played as a scenario driven game. The Deployment Maps (whist initially appearing to be message from outer space) are a very clever way of randomly generating starting locations, and all 14 quick fire scenario ideas are intriguing and inviting.

The importance of terrain in Barons’ War games is underlined by a return to that subject in the final chapter of the book, with more detailed information on how to categorise terrain and cover, and the effect it has on the rules.

Hurray for the closing pages of the book! Not just because we have made it through over 120 pages of rules, but because we finish with a very welcome Glossary of terms and an Index, plus a QRF or QRFs – because it stretches to 4 pages. And a page of copiable tokens.

We hope this look at The Barons’ War Rule Book has given you a feel for the game. It will only be after having played a couple of tabletop battles that we will be able to provide a full review of the rules, but we are already eager to do just that. The flavour for the period is self-evident and the potential to expand into other 13th and 12th Century conflicts is entirely plausible. The well written and clearly presented text gives great confidence that despite the complexity of the rules (particularly surrounding combat and Line of Sight) after a couple of trial runs of Barons’ War games they should move smoothly and provide a great deal of fun and excitement.