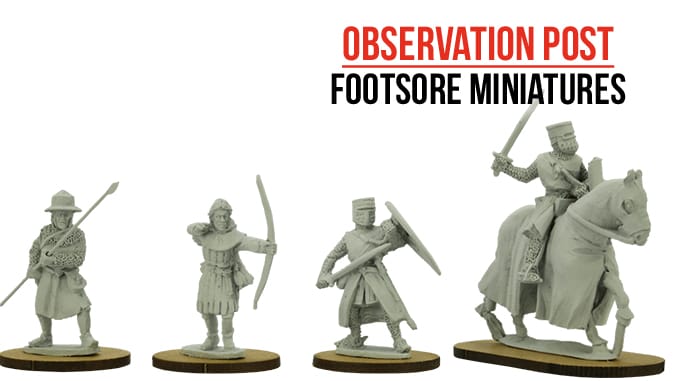 In this extract from an article in the March issue of Wargames Illustrated Editor Dan gets excited about a new range of medieval figures from (sort of…) Footsore Miniatures.

What could be better than receiving 21 packs of figures for your favourite historical period? Well, opening them to discover they have been extremely well designed and crisply manufactured. That’s what I got when Footsore Miniatures handed me a box of all the latest packs from their Baron’s War range. This new range of “highly detailed 28mm miniatures for medieval games set during the 13th Century”, was commissioned by Andy Hobday, designed by Paul Hicks and has been manufactured by Footsore, they’re not strictly Footsore Miniatures, but let’s gloss over the boring admin and take a look at what is on offer.

The Barons’ Wars were two conflicts which excited the nobles of England, Scotland and France in the 13th Century and engaged their sparring retinues in the usual round of medieval sieging, skirmishing and even a handful of
‘big battles’.

The earlier (suitably titled) First Barons’ War centred around the ‘invasion’ of England by Prince Louis of France (later to be King Louis VIII). It began with Louis and his French, English and Scottish allies warring against that pariah of British history King John and ended (on land at least) at the Battle of Lincoln Fair in 1217, when the French were tactically and combatively beaten by one of the great heroes of medieval England, William Marshal.

The Second Barons’ War, 1264 – 1267, heralded the birth of British democracy, but more importantly for us saw more fighting with English-on-English action at the Battle of Lewes, where King Henry III was taken prisoner and the Battle of Evesham, where chief rebel Simon de Montfort had his body torn apart by the loyal soldiers of Prince Edward.

Both conflicts are fascinating and whilst totalling just five years at different ends of the 13th Century provide plenty of scope for wargamers in terms of tabletop medieval games for those, who like me, are plate armour averse.

The benchmarks of the Barons’ Wars are chain armour covered by surcoats, the reduction in the size of the kite shield – into a heater – the enclosure of the face in the great helm and the development of heraldry. All this potentially makes for great looking figures, now let’s see if these Footsore Miniatures deliver!

It’s all very well admiring those brightly painted hot shots on their destriers, but it’s us lot (the commoners) who did most of the fighting on a 13th Century battlefield, so it’s fitting that there are three early packs of ‘Spearmen’ and ‘Bowmen’ in the range. A couple of the Spearmen packs cover those soldiers who have been provided with mail armour and shields, whilst the third are struggling to find anything but the clothes they stand up in.

Do you like your spearmen minis to have closed fists which need to be drilled in order to slot in the top quality metal spear which have been provided? If so you’re in luck ’cos that’s what you will have to do with these fellas. I’m sure once you get on a roll with the whole tiny drilling project you will be well away. My first thought is – gulp!

Incidentally there is much talk (amongst a very small circle of people) about the length of the 13th Century spear, for me, the ones provided with these figures are spot on.

The Bowmen are similarly scantily armoured and conform to the look of pretty much every medieval (from post Norman to the Hundred Years War) archer figure which has gone before them. Having said that even on these ‘basic’ figures you can see some great detail/ expression in their faces.

Whether you, or your chosen rules, choose to call them footknights or men-at-arms, these two packs are those guys. They’ve got 13th Century written all over them – clearly not Normans and clearly not Hundred Years War or beyond. All but one of the knights carries the period-classic broadsword, the other an in-vogue flanged mace. Their helmets are an array of those on offer during the 1300s including the barrel-shaped great helm and those with a mail coif protecting the mouth and chin. All these figures are one piece castings, save the shields, which are of the larger heater (or smaller kite, whichever way you look at it) style.

The Footknights are accompanied by two packs of Footknight Commands, which include both a leader type and a banner carrier. All are suitably impressive and imposing, with shields attached this time.

It’s time to take a look those magnificent men on their “riding machines” – Mounted Knight packs 1 – 3. Each pack contains two knights and their chargers, along with appropriately sized oval bases, separate heater shields (smaller than the Footknights) and two lances – wire spears which can be cut to size. More drill-work here I’m afraid as again the figures have closed fists. Unsurprisingly the knights are very similar in look to their ‘foot’ brethren. Four of the six are intended to hold their lances couched ‘at the charge’, while the other two hold them upright. Interesting the designer has gone for a very high elbow couching style, not something I am familiar with from pictorial evidence of the period.

The horses with their caparison cloth coverings present a great canvas for the painter. I’m not sure why one of the horses has a strange bowing action, but I’m willing to believe they are blowing and scraping their front foot on the ground in an aggressive equine way.

Fitzwalter was the leader of the baronial opposition against King John during the First Barons’ War. He fought for Prince Louis and was captured at Lincoln, later joining the Fifth Crusade in 1218.

Hubert de Burgh was a King John loyalist, defending Dover Castle for the troubled monarch and leading his naval forces at the Battle of Sandwich in 1217. The de Burgh model is holding a great helm in one hand and what looks like a scroll in his other – perhaps alluding to the fact he was John’s Chief Justiciar. Incidentally all the bannermen in the range, including those in the command packs, are in great dynamic poses with detailed clothing and armour and have open hands to accommodate their wire spears. (Phew! No drilling.)

The last of the character models is (uniquely, so far at least) a one-piece mounted miniature: Stephen Langton. Here we have the great politician and Archbishop of Canterbury (1207 – 1228) depicted as a crusading soldier of god, holding a cross aloft whilst a mace hangs from his wrist. Despite me having no knowledge of Langton breaking any skulls on the battlefield, I wasn’t there at the time and can see no reason why
he shouldn’t have.

THERE YOU HAVE IT

It’s great to see a new range of 13th Century figures to add to those of quality that already exist and exciting to see some of my historical heroes come to life in the form of William Marshal and Robert Fitzwalter etc. This range certainly passes my (albeit amateur) test for historical accuracy and also delivers when it comes to sheer attractiveness of the figures. I recommend you join with me in embarrassing the chain and surcoat ensemble, applaud the heater and great helm, and grab your paint brush and design your own early heraldry.