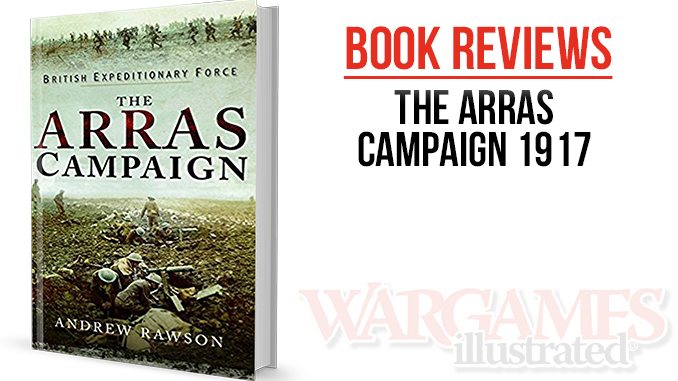 Arras is one of those Great War battles which somehow gets lost in the confusion of public perception. Vimy Ridge is rightly celebrated, but usually only as a stand-alone action, not part of the larger campaign, which involved dozens of divisions and lasted for six weeks. Published for the centenary of the battle The Arras Campaign by Andrew Rawson sets out to cover all facets of the battle, from the early successes of Vimy and Arras through the actions round the Scarpe and Bullecourt, to the eventual halt of the battle when the focus switched to the Salient and the build up to the attacks at Messines.

The Arras Campaign has 244 pages including notes and index, multiple photos, and about sixty maps! Some of the photos are well known but others are less so, all clearly illustrate the nature of the battle. Rawson uses a profusion of battalion and divisional diaries and histories, covering the battle comprehensively and accurately but spreads the action a bit too thin – Divisional attacks are sometimes reduced to a few paragraphs while a company action receives the same coverage.

Rawson argues that the lessons of the Somme in 1916 had been learned. He describes the German withdrawal to the Hindenburg Line and how that, and the need to co-ordinate with Nivelle’s flights of folly for the French Army, created problems for the BEF that again had to fight on ground not of Haig’s choosing. Rawson then describes the various phases of the offensive and how the initial successes were not replicated as the BEF wore down and the Germans adapted. He is even-handed when he depicts commanders at all levels making improvements with varying degrees of success, but doesn’t show how lessons were often just as easily forgotten.

The jacket blurb is odd. The promise that we will, “See how the British Expeditionary Force learnt and forgot valuable lessons in the art of trench warfare” isn’t backed up by the narrative. Moreover, other than a throw-away line at the end of the conclusion, Rawson seems to confuse mistakes with forgetting lessons. The numerous maps are also problematic. Some were prepared specially and are very good, while others were culled from Divisional histories with no consistent use of symbols to show units. The informed reader can usually surmise what is shown but this is harder work than necessary. Rawson alludes to this in the text stating that some “regiments are not identified” but this is not helpful when the map shows Division and Brigade locations but the accompanying text uses Regiments but not Brigades.

Overall, this is a curate’s egg of a book, some good, some bad. Rawson sheds light on an often forgotten battle but in an uneven way, and some parts feel rushed while others are much better fleshed out. It is worth reading as an introduction to the battle but I suspect there is little in it for most wargamers.