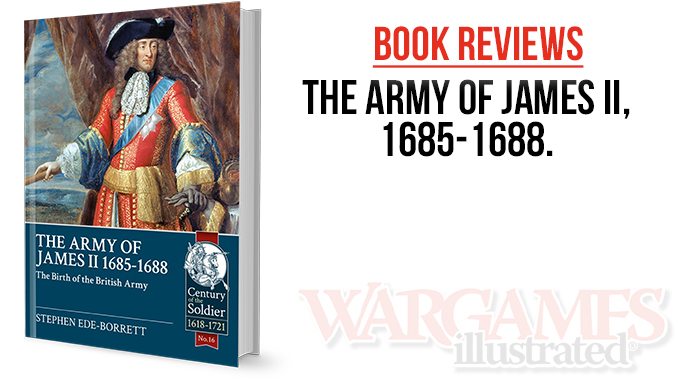 First of all, the basics about this book, it is the 16th book (currently) in Helion’s fantastic Century of the Soldier series and is published in there ‘Falconets’ format, which is a softback publication 248mm by 180, being the same standard size as an Osprey Men-at-Arms, but this book runs to 208 pages with 8 pages of colour including 4 full pages of especially commissioned artwork by Mark Allen, 8 pages of black and white illustrations and a further 41 illustrations or photographs spread throughout the book.o say that this is a reworking and republication of Stephen’s original book on the Army of James II published in 1987 by Partizan Press would be a gross injustice to this new and very much needed addition to the printed material on this microcosm of time, when King James II was responsible for implementing numerous reforms of the fledgling armies of England, Scotland and Ireland which laid the groundwork for the successful armies commanded later by both William III and the Duke of Marlborough.

The author has conducted extensive new research including being grated access to the Royal Archives at Windsor as well as the National Archives at Kew.

The author advises us that he has deliberately stayed away from commenting on the political situation of this period and does not go into the background of the glorious revolution, anyone interested in this aspect should look towards John Childs seminal work on “The Army, James II and the Glorious Revolution” published by Manchester University Press in 1980.

So, back to this new publication which starts with a forward by Christopher L. Scott followed by 12 pages covering the Forward, Preface, Notes and Introduction which soundly ground the book in its historical context and gives guidance from the types of dyes available at this time to the Drill books that had been published in this period and even down to explaining the currency in use in the 1680’.

The book then is divided into main sections, the first in the next 112 pages is devised into 8 chapters:

The next section consists of 70 pages and hold an extraordinary amount of information including 9 pages of tables and 51 of appendixes and also include a detailed 10-page description of the 8 pages of colour illustrations, the appendixes are:

The book closes with a very useful 5-page bibliography.

Each of the first 7 chapters are generally divided into sections covering the Organisation, Uniforms, Armour & Equipment, Tactics and Pay, each of these sections is well written with the authors style resulting in a concise and informative text that manages to hold a lot of information without becoming confusing and keeping it a very readable book.

The author’s knowledge and love of this period is obvious when reading the book along with his commitment to writing as full as account as possible, he has taken in my view the very brave but correct position when there is a shortage of original information, rather than making a educated guess as a lot of authors have done, he simply states that the information is not available and leaves it up to the reader to make any “educated Guess”.

There is new information all the way through this book, and the organisation will allow for anyone to dip in and out when they are just after a specific piece of information. and I believe this is going to become a must have for anyone with even a vague interest in the subject, the author has managed to dismiss a number of the myths regarding the Army of King James II.