Texicana II: The Alamo & Beyond 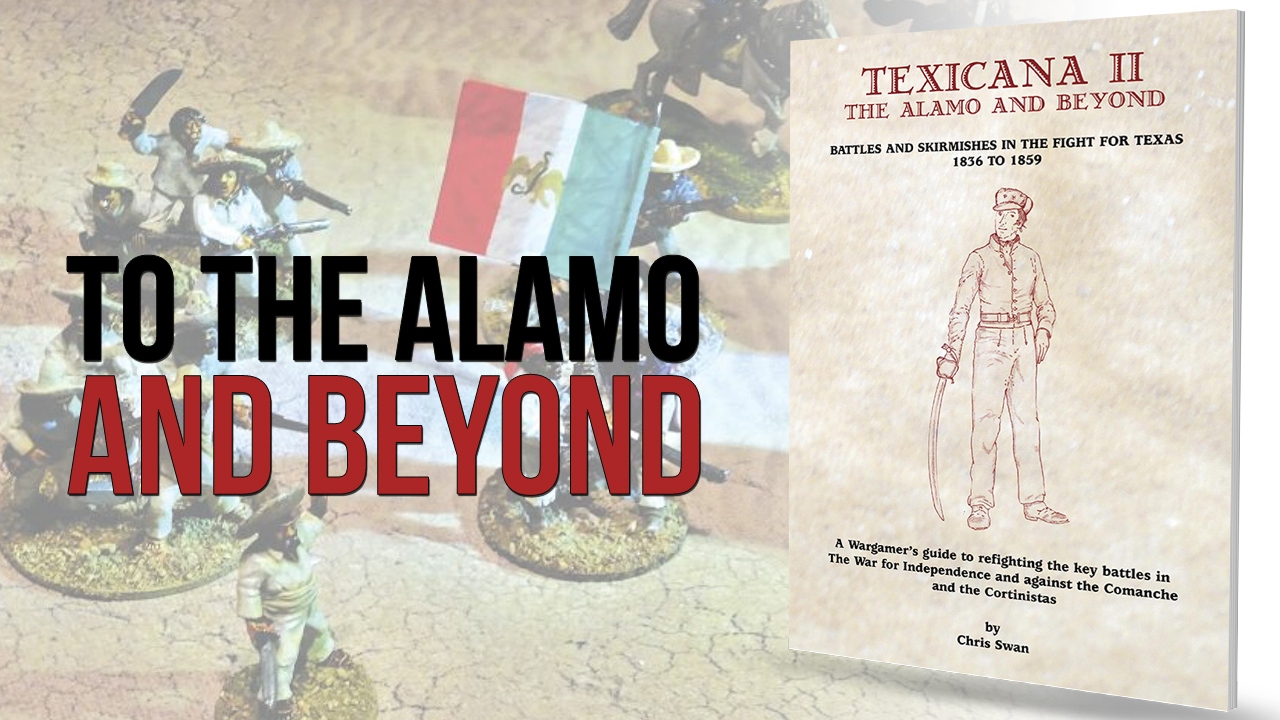 There will not be many wargamers to whom the story of the heroic defence of the Alamo will be unknown. The commanders, William Travis, Jim Bowie and Davey Crockett, have gone down in American folklore for their brave, but ultimately futile stand against the Mexican forces under Santa Anna. Despite its fame, the Texan War of Independence remains on the fringes of mainstream wargaming, which is a shame as it is an interesting and colourful period.

Texicana II by Chris Swan aims to change all that, introducing the war to those who have not thought about gaming it before whilst also providing useful information and ideas to those who already game this period. The book is A4 size softback publication that runs to 119 pages, many of which are in full colour.

Each chapter begins with a historical overview of the campaign before discussing key engagements. These battles are then presented as scenarios with army lists provided alongside information about the key antagonists. We begin, as the title suggests, at the Alamo, where the author takes us through the background, personalities and key events of the battle. As a wargame, this battle could be something of a foregone conclusion so the author suggests fighting just one aspect of the battle at a time, such as the assault against one section of wall, for example. There are also special rules to allow for random events that add flavour to the game. This pattern is continued in part 2, which deals with the rest of the independence campaign and provides scenarios for battles at Coleto  Creek, San Jacinto and Salado Creek.

Chapter 3 deals with the Mexican Army, it’s background, organisation and uniforms whilst Chapter 4 does the same for the Texian army. There is a full colour page for each side showing uniforms for many of the regular, and irregular, units alongside some ideas on how to represent them in wargames using the Black Powder Rules. As well as using the special rules provided in the Black Powder Rulebook to individualise certain regiments, the author has included some special rules of his own to give each army both a period feel and to help it act in the way it did historically. This was a nice touch and showed that the author has really put some thought into how best to wargame this period.

Chapter 5 deals with the war against the Comanche and again provides background, key historical figures and details of the campaign before providing The Battle of Little Robe Creek and Plum Creek as two wargames scenarios. Again, a page of full colour pictures is provided showing the Comanche and their Texian opponents as well as details of how to represent them using Black Powder rules. I liked these scenarios, as the author has suggested some nice rules to represent the often random response the Comanches could have to the death of their leaders, which ranged from fleeing in terror to fighting to the death to avenge them!

The final chapters deal with the Mexican uprising against their new Texian governors, better known as the Cortina Uprising, which I must confess I had never heard of before. Again, full historical details are followed by details of the protagonists, the armies and the key battles.

Finally, the appendix discusses the availability of miniatures for the various conflicts covered in the book along with some random event cards to use for each of the battles that appear as scenarios.

I have to say that the author really does know his onions when it comes to this period. The historical backgrounds were interesting and genuinely discursive, whilst he has obviously put a lot of thought into how best to play out the battles of these campaigns as wargames. Those of you used to the high production values of other supplements on the market at the moment might find the photos of the miniatures in the book, along with the artists prints, a little rough and ready but they get the job done and illustrate what the armies of the period should look like. Overall, if you already play this period or think you might like to know more, this book will suit you down to the ground.