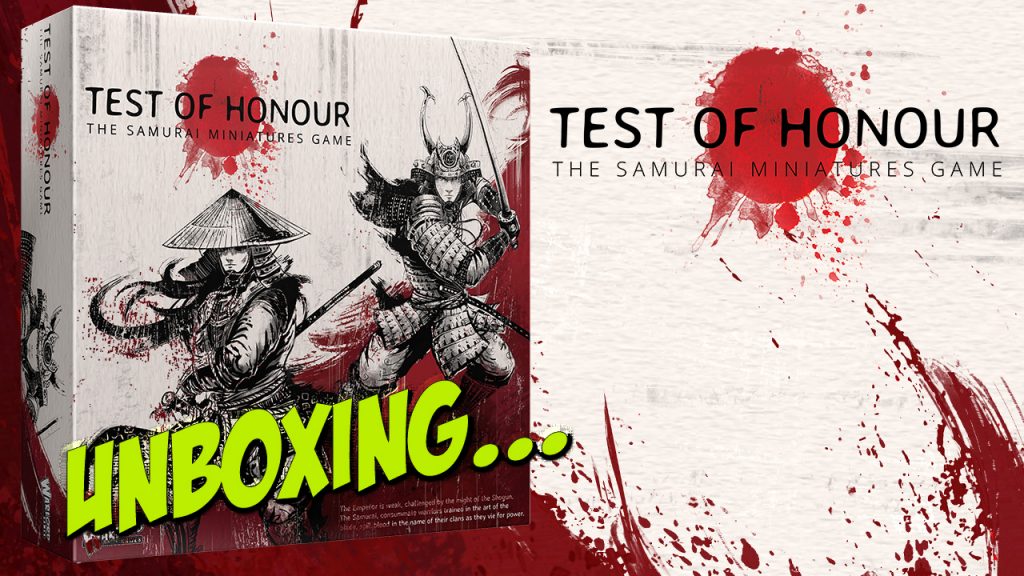 Warlord Games are earning a growing positive reputation for their boxed game products. The line has so far seen the production the award winning Project Z, the upcoming Exterminate! Doctor Who Miniatures Game and today’s topic, Test of Honour.

Test of Honour is intended to represent skirmish level combat between groups of Hero Samurai supported by retainers, either other loyal Samurai or Commoners. Written and developed by Graham Davey and Andy Hobday, two samurai era aficionados, this is a box full of everything you need to get started with an affordable price tag.

The first items you come across are the two durable ‘punch boards’ of 2D scenery and gaming tokens. The scenery depicts three fairly generic Japanese buildings, some walls, gates and hedges. These are all double-sided, depicting the buildings as either intact, on fire or burnt out. The walls can be flipped to use hedges instead or vice versa. All the tokens you need to play the game are included in the box, again double-sided to reflect gameplay options. The images are crisp and clear and suitably themed to the game.

Turning to the rulebooks, we have two, the Main Rules and the Battle Guide. These are really well laid out and accessible books, with plenty of examples and use of text supported by images to show key aspects. By having two separate books, you can focus on learning the rules, then turn to the Battle Guide to find clearly explained force creation details, a nicely done introductory scenario and then six more advanced scenarios that can be used for standalone games or linked together to create a short campaign. For more details on the rules themselves, check out our Rules Showcase article in WI 354, our April issue.

As we work thought this packed box, we come to the sprues of plastic figures. There are 35 self-assembly multi-pose miniatures in the box, allowing you to field up to 5 Samurai and 30 Commoners (Ashigaru). The Ashigaru may be fielded as Archers, Musketmen or Spearmen and the armoured samurai can be put together with fairly plain or more ornate options. There are suggested options using the parts included on a leaflet for each troop type. There are also individual and group bases included in the box, allowing you to use the Ashigaru figures as lone warriors or as part of a band of similarly armed retainers. The wealth of options available on the sprues means that no two miniatures ever actually have to be the same.

Next we turn to the decks of cards and specialist dice included with the game. There are 4 decks of cards included in the game, with by far the largest being the Recruitment cards. These are used to create your force and contain all the stats and special rules for every miniature or group you decide to field. There are 42 Recruitment cards in total, with 21 for each of the blue or red Factions that mirror each other (e.g. one Samurai hero, one Experienced Bowmen, etc.). We then have 23 Skill Cards, 6 Injury Cards and 10 Dishonour cards. Again, for more details, please see WI 354. Lastly, there are the 10 Battle dice, which use symbols rather than numbers to resolve combat. By being card and specialist dice led, there is room for future expansion galore, with the release of new characters or miniatures being augmented by the creation of new cards to compliment them.

With a number of expansion sets already planned for release, complete with miniatures and relevant game cards, this is another of those boxed wargames that contains all you need but can be used as a core to build upon. The overall level of product design by the Studio, coupled with the quality of writing by Graham Davey and Andy Hobday, shows that this is a well-thought out product that has been thoroughly play tested and is ripe for use by gamers looking for more than a one-off game book. Yet, despite the hard work put in, the retail price for this game means that players are making a small investment but getting a significant return.

You will find more Test of Honour coverage in the April and May issues of Wargames Illustrated, with the May magazine taking the theme of Samurai and including several articles on wargaming with these masters of Japanese warfare.