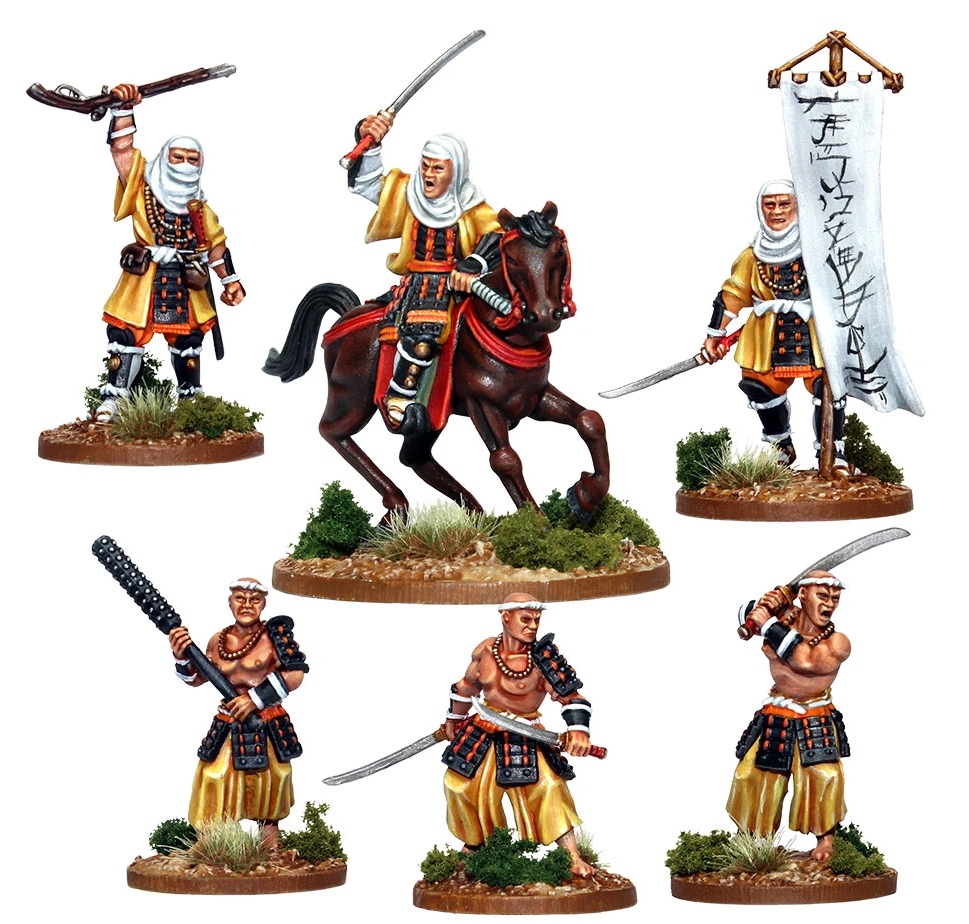 It’s always a thrill to get a new release of Test of Honour figures in for review, not only are the figures always well designed with great character, they are well cast and the presentation is great. The artwork on the packaging and components – cards in the boxes and packs – is always evocative and alluring, and of course all new ToH miniatures are very useful for those looking to expand their Test of Honour games with new recruits.

This latest release features a Sohei Temple Guard Box set plus single packs of Sohei Musketmen and Sohei Fanatics. The Sohei were Buddhist warriors monks comparable with the religious military orders of western Europe like the Teutonic Knights.

Superior Saburo (multi-part mounted figure) leads the defence of the temple-fortress, galloping at his enemies to deliver a devasting one-off attack with the ‘Dive Strike’ card.

The Sohei Sergeant (a fantastic figure, with musket held aloft) can send his troops surging forward in a sudden wave (or unleash a sudden blast of gunfire if you use him as a gunnery sergeant) – a definite contrast to the steady ashigaru of the clans.

Meanwhile the Creed Bearer carries a banner daubed with inspiring prayers and religious slogans, making it more likely for nearby believers to trigger their Strike bonuses.

The devout Temple Guards themselves are the toughest fighters, hand-picked from among the warrior monks and able to shrug off minor injuries and carry on the battle unaffected. You can make them even harder to defeat with the ‘Final Guardians’ trait.

Enough round MDF bases are included in the box for all the figures.

The pack of Sohei Musketmen contains three model gunners in three different highly-animated poses, it comes with three cards. The ‘Reckless Shooters’ trait allows musket-armed troops to move faster but limits them to firing at the nearest enemy. Whilst the ‘Grab a Musket’ skill lets a character shoot with the gun of a nearby friend.

The Sohei Fanatics are all brandishing the iconic naginata pole arm weapon. Give them the ‘Unstoppable Frenzy’ trait (card included)  to make them even more devastating during Follow Up attacks. The ‘Righteous Slaughter’ skill has a similar effect for a character.

These miniatures can also be fielded as ‘standard’ Sohei warrior monks.

At £35 for the box set and £12 for the packs of three figures, you will find cheaper ‘Samurai’ figures, but you won’t find any that are better looking.