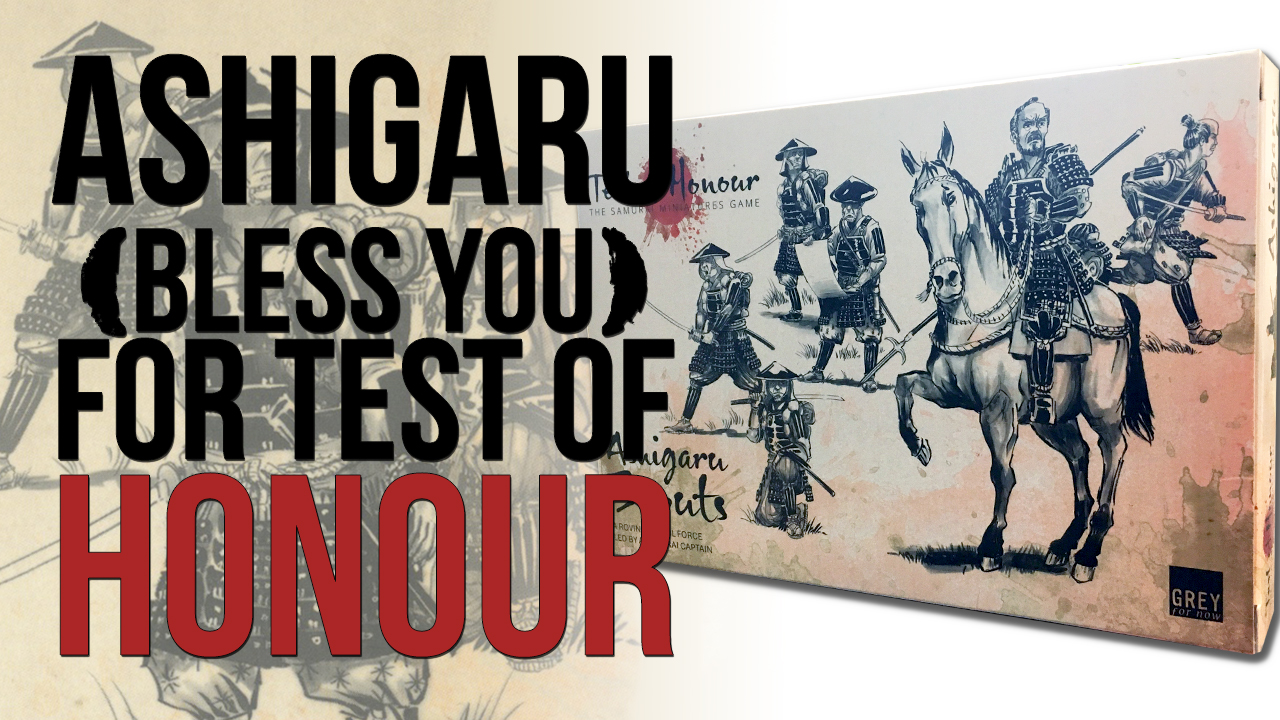 Grey For Now Games continue to build upon their Test of Honour 2nd Edition rules by adding this new boxed set of miniatures and cards – Ashigaru Scouts.

Having opened the box, we come upon two ‘clamshell’ packs of figures. One of these contains a mounted Samurai Captain and Ashigaru Sergeant. The Captain is designed to be assembled mounted on a horse, with reins in one hand and a spear in the other. The Sergeant is sculpted reading from a scroll or looking at a map. Both figures wear standard Ashigaru (foot soldier) armour of the period. This is fairly standardised and simple, as befits their status as being beneath the level of their Samurai betters.

The second pack consists of 4 Ashigaru scouts, all armed with katanas and in the same armour as the first examples. The poses include kneeling, advancing with sword in hand, preparing to attack or defend with both hands on their katana and a running figure with a message pouch and drawn sword.

All six figures are very well sculpted and are extremely characterful, as is common with all the miniatures in this range. All figures come with MDF bases, with the option to mount the Scouts on individual or group bases.

Having gazed for a while at the great miniatures, its time to turn to the gaming cards included in the set. There are 18 cards in total, 9 character cards, a special ability card and 8 cards for general game use, including 2 Quest cards. The art of the character cards corresponds to each of the figures, with 3 individual Ashigaru Scouts, a group-based card, a Runner card, Sergeant and choice of 3 different modes of play for the Captain. There is also the ‘Stealthy Approach’ ability card which may be used by the Scouts.

The remaining cards split down into 1 Mastery card, 2 Commander cards, 2 Knowledge, 1 Agility and 2 Quest cards, all designed for general play. By using these cards with the miniatures provided or during game play, players may add new options to the overall gaming experience and gain additional cards to place in the relevant decks.

It’s always interesting to unpack a Test of Honour boxed set, as the miniatures are excellent and the cards add to the atmosphere of the game, thanks to their artwork and style. The overall look of this particular supplement echoes the design aesthetic of the latest version of this skirmish level game and is a worthy addition to those already available.