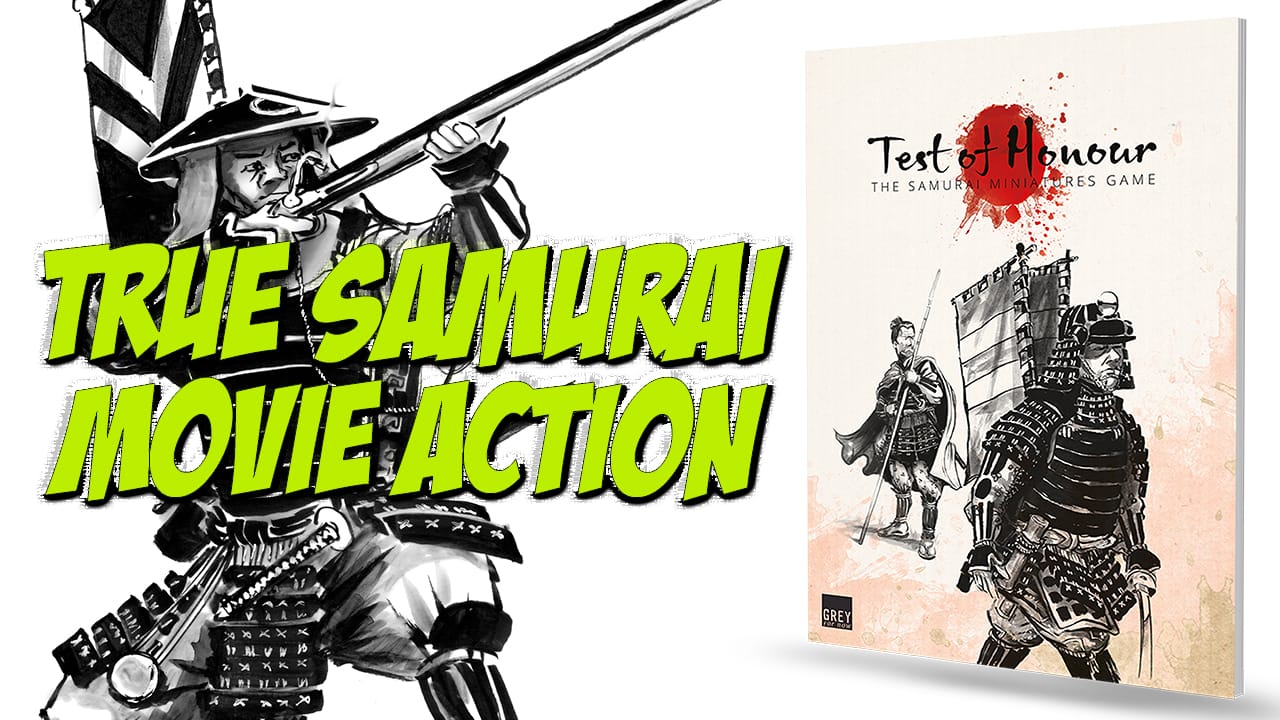 Grey For Now Games now own the rights to the game that the founders designed. To celebrate this fact, the lead designer has gone back to the rules as published and added new levels of play, whilst shifting the focus from just large groups of figures fighting to a more cinematic approach. The new book is a slightly larger than A5 softcover book with 72-pages that are both recognisable but contain some new rules and gaming options.

The new, improved rulebook outlines the main rules, shows images of the new and older miniatures available, the main game elements and takes you through setting up a game. Its here you start to see some of the differences. For example, the Recruitment Cards now have symbols in their top right corner. These symbols reflect the cost to recruit each figure and also the Faction that they belong too, whether Military or otherwise, which also denotes the skill card options that your figure may access. Another addition is connected to the past mechanic of Dishonour cards. In the past, performing bad acts gained you Dishonour cards that would aid you with +1 dice but have a long term negative effect. The new mechanic has added Honour cards, where ‘good’ acts mean that a card is allocated which usually has a -1 dice but a positive long term effect. The new rules and changes have been done subtly however, and the author has considered the fact that many players have already committed to the previous rules. The rules are enhanced versions of the past version, rather than a total reboot.

New rules for cavalry nestle alongside streamlined versions of the original version, with new options for shooting such as firing into melee combat. There is more made out of the role of terrain and particularly buildings, which can now be entered and fought within. Weapons are more or less the same, with many having bonusses in ranged or melee combat. There are also negatives for when a poor die roll is made. Skills are found on special skill cards and a ‘deck’ of skill cards is created by picking from a shuffled deck. The skills available to each figure are dependent upon the icon recorded on their character card and only skills relevant to that class of character can be chosen. The use of Honour and the new Dishonour cards are fully explained: by taking an Honour card, you lose a Strike dice but the effects of the card are to your or your factions benefit. However, if you act with Dishonour, you may get an extra dice on your Strike attack but the subsequent card will have a negative effect for your character. In addition, Quest cards allocate secret mission objectives that will aid the characters in battle if completed.

The Battles section takes players through the first battle and then offers 18 scenarios, ranging from basic, getting to know the rules, up to much more complex battles, such as those involving poor weather, the use of such characters as the Unlikely Allies or similar who add additional bonuses to the faction which employs them, fighting in darkness and more. Each scenario has clearly laid out objectives and victory conditions, and have a fair degree of playability due to the fact you can set up your force in any number of ways to attempt to complete them. The aftermath of battle is explored, with the option to expand the skills of your models which survive an encounter, and progress your characters along the way, creating a sense of narrative adventures being undertaken. In addition to the rules for low figure count skirmishes, there are rules for varying your gaming experiences and taking part in large battles.

This is a good, clear, easy to understand rulebook which is extremely accessible and contains plenty of supportive advice in the form of step-by-step instructions. The re-focussing of the core rules system and the expanded rules make this a much more ‘adventure’ focussed set of rules, and one which benefits the gamer willing to take part in a campaign or series of linked battles rather than one-off combats. The company has done a great job in adding to the original approach to the rules without substantially leaving behind those whom have already invested time and money in creating forces for the first edition.

For more information, go to https://testofhonour.com