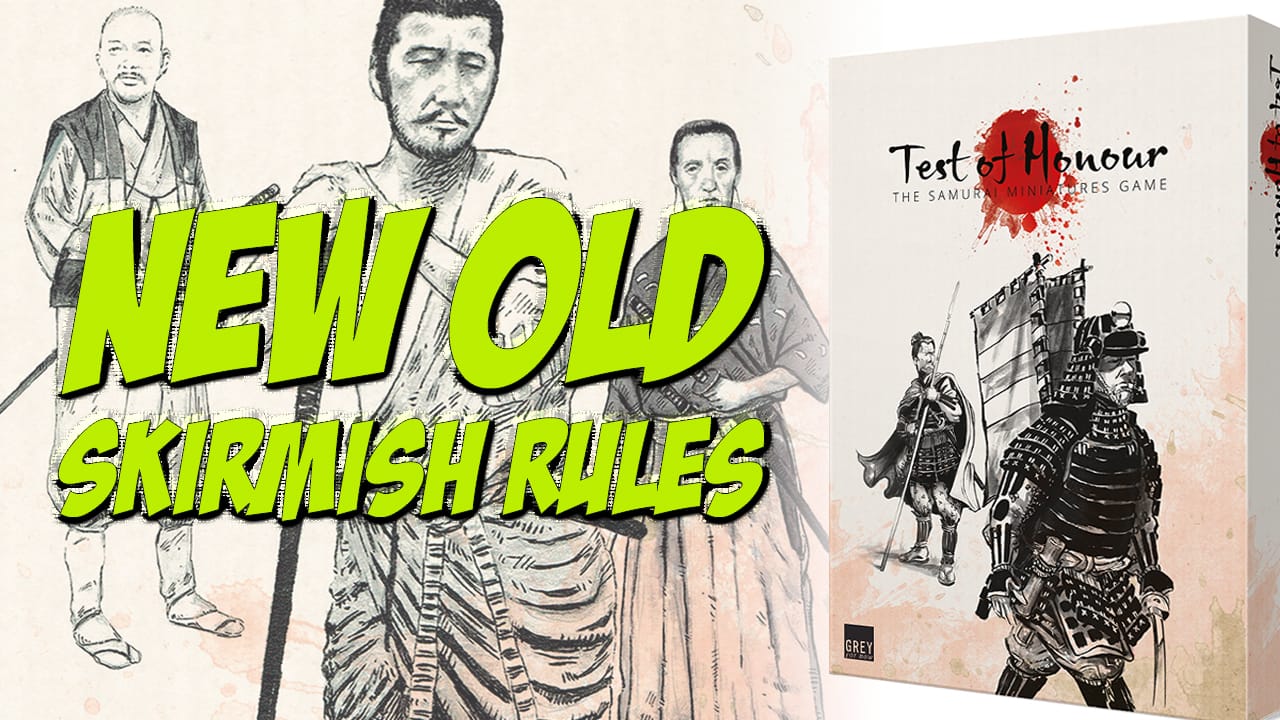 Grey for Now Games have worked hard to re-vamp the Test Of Honour rules into an advanced form of the previous incarnation. The re-born boxed set has a number of new features that add to the more cinematic nature of the game.

The box itself is a work of art, although gone are the plastic figures of the first edition. Inside the box are the various card decks, used to play the game. There are six decks of cards in total, presented in full colour and the size of standard playing cards. Following the card decks comes the punchboard for the various tokens needed during gameplay. Next come the special combat dice used during the game, with their unique symbols. The rulebook itself contains rules old and ‘enhanced’. In addition, for those who pre-ordered the game, there is a free figure, supplied unpainted, that represents a typical Ronin, a wandering samurai of the Shogun era.

The 72-page softback rulebook is packed with rules, examples, artwork and more. There is a fair amount of repetition from the previous version, but, on closer inspection, this version has a different focus, moving away from ‘just’ skirmish combat and adding an element of cinematic-style adventuring to the mix. This edition is more akin to the classic Samurai movies of Akira Kurosawa and others, and the new rules reflect this more interactive experience.

The punchboard tokens are printed on a durable card and cover all those items needed to play the game. These are double-sided and in full colour as far as possible. The six-sided symbol dice are largely unchanged, using the same two, one or blank system for the faces, plus the X used in the game. There are 8 six-sided dice provided.

The cards have different in-game uses. We have the new Recruitment cards with a new format, covering Samurai and Ashigaru, plus Skill, Injury, Quest, Honour & Dishonour, and Trait cards. That provides the gamer with a total of 100 cards, right there in the new box. Expanding your options are the separate Clan Forces and Enemy Forces card sets. Each set contains 100 more cards, offering updated versions of the cards that were originally found in the old sets. The Clan Forces are Mounted Samurai, Daimyo’s Retinue, Onna Bugeisha, Ronin and Ninjas. The Enemy Forces cards cover Sohei Monks, Chobei’s Renegades, Bandits and Brigands, Masked Men and Paupers.

The main changes you’ll notice on the cards are all the original stat lines have been re-vamped and a new level of consistency has been achieved, which increases the sense of game balance. An additional one point has been added across every base profile, adding greater difference to the range of troop types available. Another addition to the Recruitment Cards is that they now have symbols in their top right corner. These symbols reflect the cost to recruit each figure and also the Faction that they belong too, whether Military, Mysticism, Rebel or otherwise, which also denotes the skill card options that your figure may access. All Skill cards labelled as Honour have now been re-named with the new Duty, in order to avoid confusion with the new Honour / Dishonour card system.

Overall, this is a nicely packaged boxed set that serves both as an enhanced version of the previous and also takes the game to a new level. Much is familiar, but the new rules and ideas are well worth exploring. If you’re finally ready for true tabletop adventures in the Age of the Samurai, this is the game for you.