Terrors of the Deep 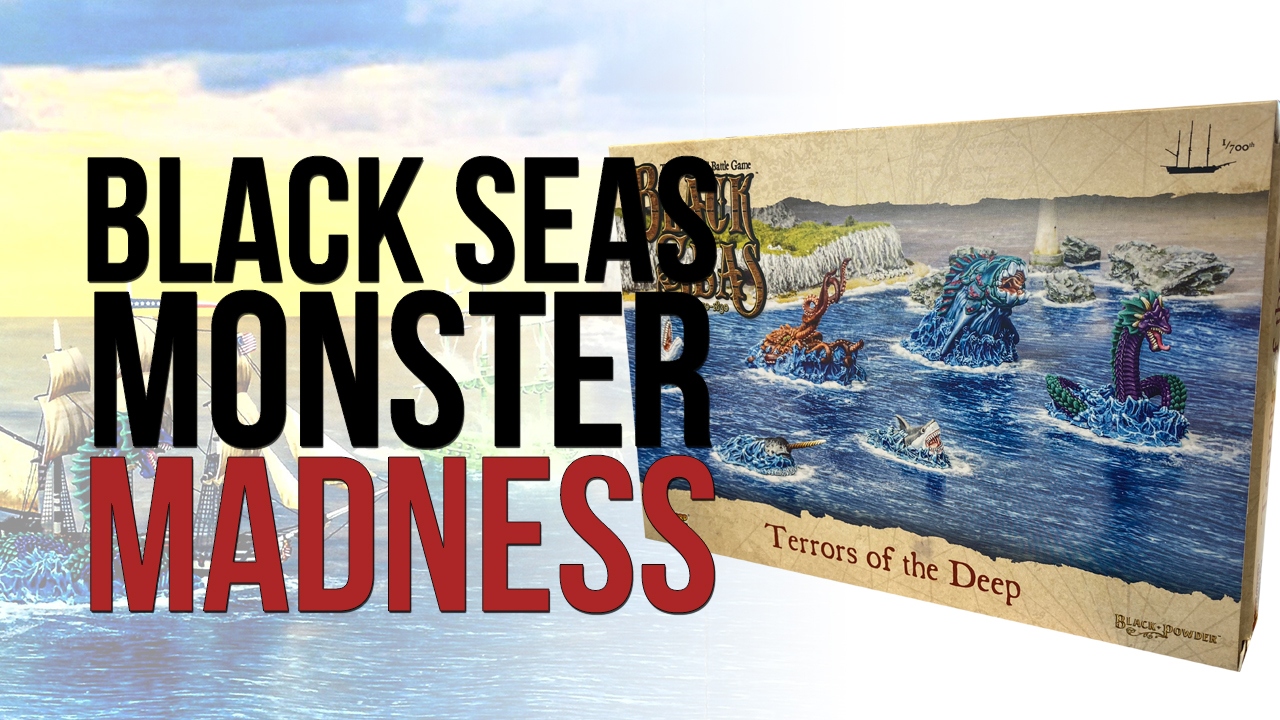 Any of you who thought that Black Seas by Warlord Games was a serious simulation of naval warfare in the Age of Sail are about to be disappointed, but anyone else who wants to add a bit of silly monster fun to their Black Seas games is in for a real treat.

This is a transcript of the voiceover for our Terrors of the Deep video – for those of you who would rather read than watch.

Let’s take a look inside the six model Terrors of the Deep box set.

So, we have the models (currently under wraps) six game cards, one for each monster and an eight page rules booklet.

The Terrors come three to a pack, with this first pack containing, The Kraken, White Whale and Sea Serpent.

This second houses the Leviathan, Giant Narwhal and Megalodon.

All the models are made from resin, with the Kraken and Narwhal featuring metal attachments.

Let’s take a closer look at the models, beginning with the Leviathan.

Resembling a giant pre-historic fish, the Leviathan is the biggest of the six models and consequently the meanest in the game, with a total of 70 hit points – the same as a third rate ship.

As you can see it’s a well sculped piece, looking suitable scary and a robust bit of kit to boot.

Next up we move from fantasy to semi-fantasy with the White Whale. Whilst not based on a real whale this model is more akin to Mody Dick the famous boat smasher from the book of the same name. In the game the White Whale uses its massive head as a ‘Mighty Ram’ and a ‘Water Jet’ for its second attack.

The Megalodon (which means ‘Big Tooth’) is an extinct shark that has somehow survived in the world of Black Seas. It’s actually the weediest of the Terrors but still packs a punch with its first attack of ‘Shark Bite’.

The Sea Serpent is a two piece resin kit which looks a bit like a snake-dragon hybrid, again, a great looking model with fine detail just begging to be painted. In the game it has the ability to coil around a ship – grappling and damaging the vessel.

The Kraken is that classic giant squid-like sea monster made famous by 20,000 Leagues under the Sea and numerous other seafaring legends. This model comes in two parts, with the main body made of resin and metal tentacles.

I’m loving the detail on the resin body, particularly the suckers and gaping mouth.

Last and very much least is the Giant Narwhal. Compared with the other Terrors, the least impressive of the models, but featuring a nice metal horn which in the game is used as a ‘piercing tusk’ and on the tabletop will be adept at puncturing gamers fingers.

Moving onto the other items in the box we have the rules booklet and game cards.

The A5 booklet beings with initial general information about using the Terrors in your Black Seas games. One Terror per game should suffice, being deployed in the centre of the table, from where it will Speed towards the nearest ship.

Following these initial general rules the booklet provides stats for the six monsters and all their special attacks, including such things as the Leviathans; Crushing Bite, Sea Serpents Snake Bite and White Whale’s Mighty Ram.

The Terrors stats and rules are followed by rules for a Ghost Ship, which whilst not included as a figure in the set can easily be modelled using any Black Sea vassal and used in the game to strike fear into living crewmen and even (if the ghost ship comes within 1”) spirit them away.

The Booklet concludes with a monster heavy scenario called Bermuda Triangle which allows you to get all your Terrors on the table in one game.

Finally we have the all-important game cards, on which player track hits caused to the Terrors and from which they can check stats and special attacks.

All in all a nice twist on wargaming in the Age of Sail. The models themselves look great and the rules provided are well conceived and delivered with alluring style, all designed to tempt even the most po-faced naval gamer into trying his or her hand at a bit of fun fantasy action.