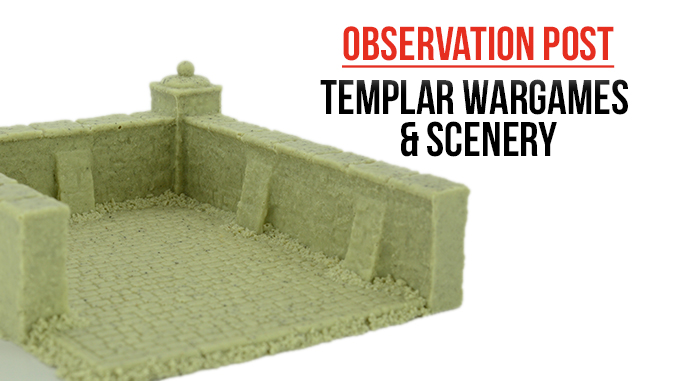 This relatively new company, proudly based in Bonnybridge, Scotland, offer an increasingly varied range of high quality resin buildings and other items.

The items sent for review are all designed for 28mm miniatures and include three different Middle Eastern-style buildings, two river sections and some damaged gravestones.

The buildings are a ruin, a courtyard and a complete building with a dome. The domed building has a wealth of detail, from the wood grain and hinges of the door to the design on the windows and the slightly raised detail of the bricks on the roof. There is also a ‘layer’ of texture on the resin model, ready to take paint and produce something more realistic. The courtyard works well with the domed building, again with plenty of detail including piles of drifted sand, cobblestones and some irregular texture on the walls. Lastly, the ruin represents the remnants of a larger building, with some nicely done traces of sand and rubble covering the floor.

The Domed Building
(Note the detail, after painting, on the roof)

The river sections each have textured riverbanks, one with a crossing point in the form of a well-rendered wooden bridge and the other without. Again, the use of texture and small details add to the appearance. The bridge ends are supported by large stones and the riverbanks meander in a realistic fashion rather than being straight. Even the river itself has some slightly raised features, perhaps benefiting from some light drybrushing with a lighter colour to bring out the variance of flowing water.

Lastly, we have the damaged gravestones, a blister pack of eight pieces. These gravestones are in the slightly Gothic style. The damaged sections are mainly deep gouges and broken edges, giving a real sense of age.

The overall high standard of these different offerings is in marked contrast to some manufacturers who work in resin. The attention to detail and the small ‘extras’ make these some of the best items we have seen. The company offers other products, including those which compliment some of the third party miniatures that they offer, including Mutineer Miniatures Indian Mutiny and Modern African, plus the Burns Miniatures SCW, Early World War Two Greeks and more. They are well worth a look at shows or via their website.

POSTAL DELAY TO THE USA