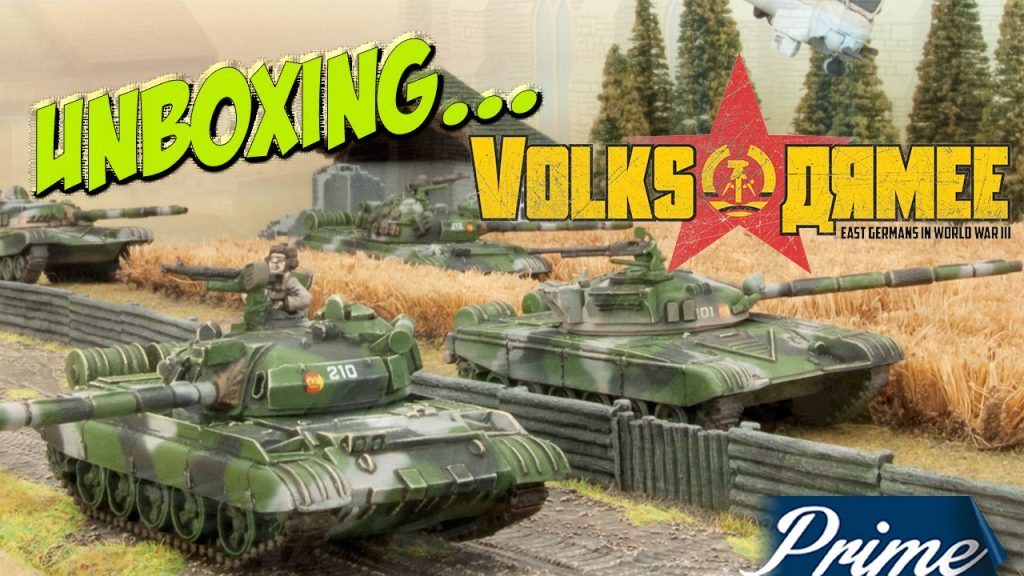 The first wave of releases for the Volksarmee supplement for Battlefront’s Team Yankee are here! As with the rest of the Team Yankee range these figures are resin and metal and provide tanks, infantry and support options for your East German forces.

First off, let’s take a look at those new tanks.

The new T-55AM2 Panzer Kompanie allows you to field theT-55AM2, with its 100mm D10-T gun, able to take on most NATO tanks but perhaps not guaranteed to take them out.

There are enough resin and metal parts in the box to make five tanks. A resin Tank Commander sprue is included in the pack, as are two decal sheets and relevant unit cards.

Although these tanks were the upgraded version of a design that was superseded by the T-72, they still packs enough firepower to engage the enemy, especially the lighter vehicles.

They employ infra-red sights and a laser rangefinder and have reasonable armour, and if fielded in enough numbers, should be able to overwhelm more advanced NATO armour.

We have a whole ‘family’ of vehicles now, all based upon the same basic design but adapted for different functions.

The BRDM-2 Recon Platoon is classified as a tank, but is more of a wheeled armoured car, sporting a 14.5mm heavy machine gun in a turret.

With four vehicles in the platoon box, this is a true ‘recon only’ combat element, designed to find the enemy, engage and then run before the opposition bring up heavier weaponry. Again, unit cards and decals come as standard.

To provide your force with some additional anti-tank support, the new AT Platoon set is the name given to a wheeled variant of the same chassis as the BRDM-2.

Essentially, this armoured vehicle is the mount for the AT-5 Spandrel anti-tank guided missile system. The vehicle has limited armour protection but high speed.

There are three vehicles in the boxed set which would work as support for infantry and tanks alike.

The final variant of this basic chassis is the SA-9 Gaskin SAM Platoon, again just a mobile weapon mount, this time for the SA-9 surface to air missile system. This is a guided anti-air system, providing much needed protection to the Volksarmee forces as they advance. There are four vehicles in the set, plus the usual game related cards.

After all that armoured goodness, it’s time to talk infantry! There’s one boxed set and two blisters of MOT-Schutzen or motorized infantry.

The MOT-Schutzen Kompanie contains 73 figures and is intended to move on foot or be mounted in the BTR-60 eight-wheeled APC. The figures break down into ten bases worth of assault rifle teams with RPG-18’s, nine RPG-7 Anti-tank teams, two PKM light machine gun teams and one command team. As always, the required bases are supplied, as are unit cards to field a Kompanie or even a Bataillon in your games.

Of course, if you’re going to field a Bataillon level force, you’re going to need more figures! So, the two blisters comprising the MOT-Schutzen Platoon and Heavy Weapons are essential purchases.

The Platoon blister has twenty-four figures including command, armed with a mix of assault rifles and RPG’s.

The Heavy Weapons blister contains twenty-four figures and a mix of AGS-17 grenade launchers, AT-4 Spigot missile launchers and SA-14 Gremlin anti-aircraft teams, adding the type of anti-armour and anti-air protection to increase the chances of survival for any infantry unit operating on a 1980’s battlefield.

This first miniature release for the Neu Volksarmee helps to create a varied East German force ready to support the Soviet advances into the West. They also represent the first foray into a new range of Warsaw Pact armies that can be fielded as an alternative to the strictly Russian offerings.

More in this figure range is scheduled for release this year, so we’ll be back to talk more about that and any other Team Yankee releases as they appear.