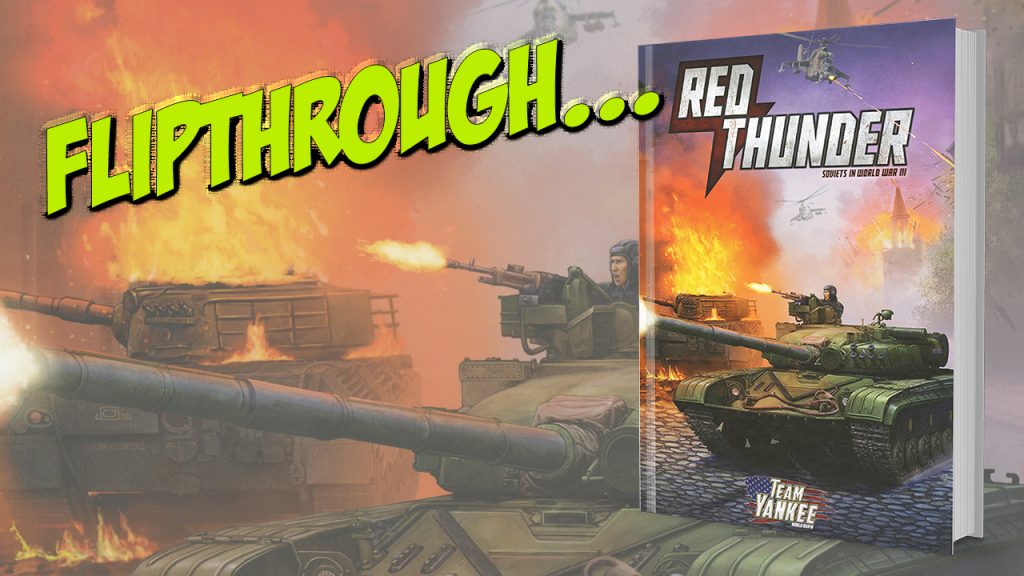 The new T-64 Soviet tank in plastic is a simple kit to create. Options include a mine clearing device that may be attached to the front part of the tracks. There is also the option to add in an additional fuel tank to the rear of the vehicle.

Although the kit doesn’t include an option for ERA armour, this is a battle tank of the 1960’s that lasted well into the 1980’s within the Soviet forces, and was still effective as a basis for later armour innovations.

Up to the usual high standards, this kit from Battlefront is a welcome addition to the Team Yankee ruleset and provides even more options for the Soviet player.

The latest supplement for the Team Yankee rules system, Red Thunder focuses upon the Soviets in a fictional World War III. The book follows the standard format, adding additional unit choices and new weaponry to options open to Soviet players.

The book begins with an account of the invasion of West Germany by Soviet forces, complete with some useful deployment maps and the ‘personalised account’ of Yuri Volkov, the commander of a Soviet Tank Battalion. There are also some nice ‘action shots’ of miniatures. All these facets add flavour to the game and lift the book from simply being army lists to part of the overall narrative of a semi-historical, alternate history.

Of course, the army lists are what every Team Yankee gamer wants, so that’s what you get! The usual clear layout is here, as shown by the double page spreads of sample Divisional, Battalion, Company and Platoon level. There are also all the statistics and in game details for a number of new units to add to your Soviet forces, including the T-64 tank, the BTR-60 armoured personnel carrier and the Storm anti-tank vehicle. In addition, the Hind helicopter features , coupled with ‘Afgansty’ veterans to make an air assault division.

There are three scenarios included with this supplement, forming part of the narrative of Major Vulkov and his men as they push further into West German territory. These are clearly laid out with maps, force descriptions and all the other information you could need.

The rear of the book continues to deliver, with painting guides and photographs of completed miniatures, including shots of the new plastic Soviet infantry.

Another gaming resource that is actually much more. Some nice narrative touches serve to advance the ‘story’ of the Third World War that never was, plus technical details on the actual vehicles and equipment will satisfy the ‘tread heads’ and others. New force options and game stats for the Soviets help to provide even more choice for those who seek to bring Socialism to the decadent West.