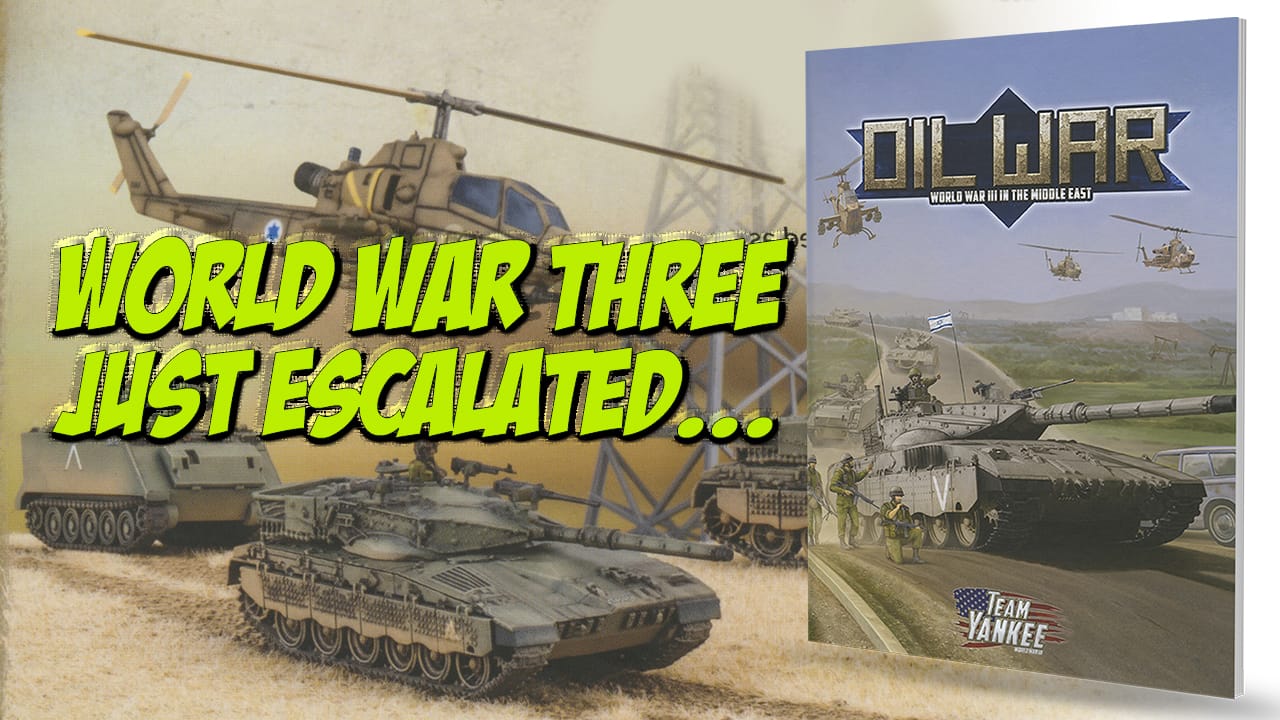 The latest set of rules for 15mm tanks and figures from Battlefront is Oil War. This is a 114 page hardback supplement for the Team Yankee World War Three game adding the Middle East as a setting and focusing on combat between a number of Arab nations and the Israeli’s and their NATO or Soviet allies.

The book begins with a look at the historical conflicts between Israel and various Arab nations, most notably Egypt and Syria, as well as a focus on the Iran-Iraq War. The focus then shifts to the spread of World War Three from Europe out towards the Middle East, as the main belligerent nations attempt to secure oil supplies and territory. There is an introduction to the Israeli Defence Forces and the operations undertaken in reality and this alternate 1985.

The first army lists presented are for the Israeli Forces. This is done in the usual Team Yankee format, clearly and concisely, with plenty of images and in a far better style than a simple list. This is an up to date Israeli Army, at least for the mid-80’s, and the lists include stats for the Merkava 1 and 2, the venerable Magach 6, M113 Mechanised Infantry with Galil assault rifles and ‘new’ support in the form of the Pereh Anti-Tank Platoon.

The next forces explored are those from Iraq, who are supported by the NATO powers in their battles against a Soviet supported Iran. The main focus is upon the older, Soviet ‘export’ equipment used by the Iraqi’s, tempered with such local variants as the VCR/TH HOT Anti-Tank Platoons, based upon French designs, and tanks and helicopters bought from a number of European sources.

The anti-Israeli forces of Syria are next, being very briefly covered compared to the others. In fact, they only get two pages, with the advice to field the army as a variant of the Iraqi force list, minus certain non-Soviet equipment.

The Iranian Army list is something of a hodge-podge of Soviet, Warsaw Pact, US and British tanks and equipment, reflecting the Shah’s purchases of the past and the Ayatollah’s dealings with the Soviet Bloc. As with all the lists, Special Rules for the relevant forces are featured.

The book moves from the hypothetical to the actual, outlining some aspects of the Iran-Iraq War of 1980 to 1985, including offering suggestions for using the Team Yankee rules to re-create aspects of this conflict and the role of the T62-M used at the time. We then segue back to the ‘alternate history’ war, with ideas on how to use 1985-era NATO and Soviet forces within the confines of the Middle East theatre of operations.

There are two scenarios outlined in the book, and rules for engaging, and defending from, bunkers. As always, there are some useful painting guides for the various forces outlined, plus pages of army deals and photographs of painted and assembled miniatures from the range.  Lastly, there is a nicely done guide to purchasing your armies based upon what is already available in the Team Yankee miniatures range.

This is a sourcebook that is typical of the clear, easily understandable style associated with Battlefront products. The use of photographs, flow charts, simple force diagrams and available options make this an easy book for gamers to use. The coverage of the various weapons and their game stats is very good, although Syria gets a bit of a raw deal in my opinion. If you’re looking to run games during an alternate or actual history in the Middle East, this is the supplement you probably need.