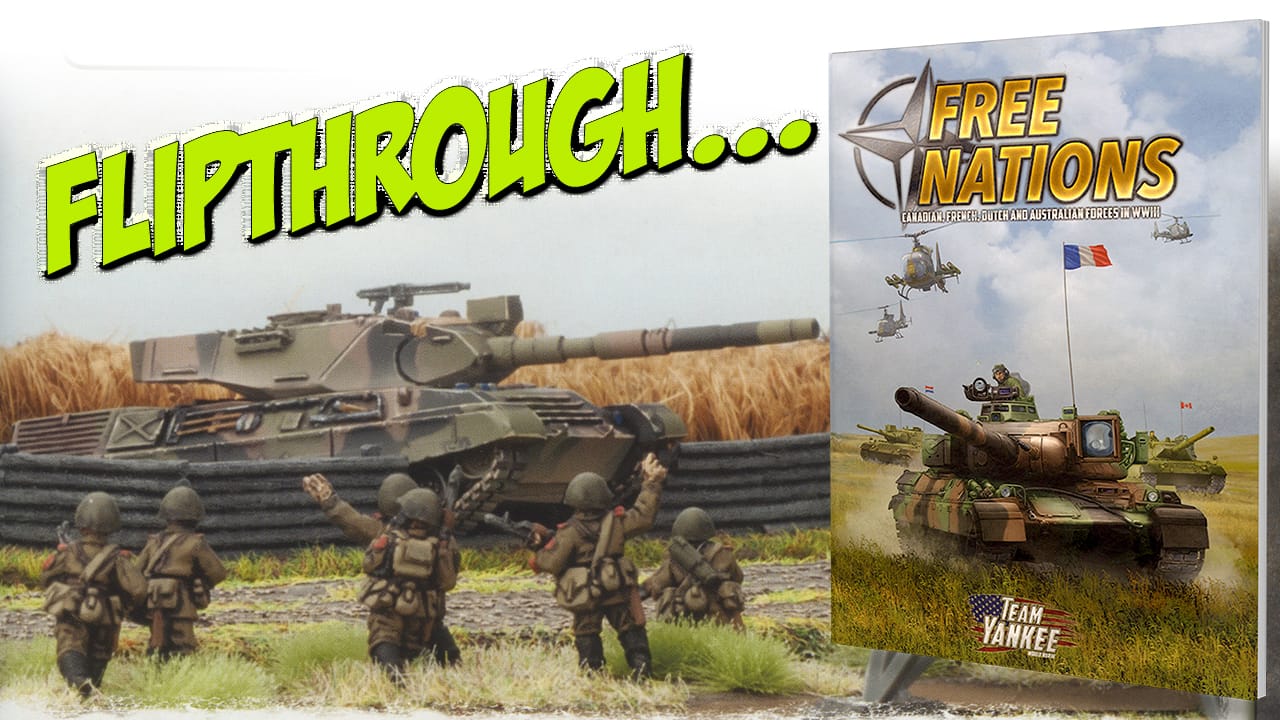 The Third World War continues to expand in the Team Yankee version of 1985. As the battle for Western Europe continues, NATO allies have pledged to support the struggle to contain the Warsaw Pact forces. The Canadians, French, Dutch, Australian and New Zealanders have entered the fray, with new or adapted weaponry.

The supplement begins with the usual maps and outlines of the war once more, adding in the positions of the new units. The first focus is on the Canadians but each new nation has an account of their dispersal, the events that they were part of and an overview of a particular action in the form of a narrative involving one unit.

The Canadian Forces section begins with a force organization chart for the core units, special rules and the attached support elements from other forces. The main armoured vehicle for the Canadians is the Leopard C1, with variants on the M113 in support, and unique vehicles such as the Lynx Recce vehicle and the Swiss made Air Defence Anti-Tank System.

In contrast with the Canadians, the French forces are entirely self-sufficient, with their own armour, infantry and support elements and special rules. Other NATO formations may be fielded as allies but this is a powerful force. The main armour used is the AMX-30 tank, with mechanized infantry in AMX-10P Infantry Combat Vehicle, able to transport troops, then provide them with support. The Escadron De Cavalerie or Armoured Cavalry Squadron is a combined reconnaissance force of VAB armoured personnel carriers and AMX-10 RC armoured cars with their 105mm rifled gun. Gazelle helicopters and Mirage 5s provide airborne anti-armour support.

The next section covers the staunch soldiers of the Royal Netherlands Army. The role of 1. Korps is outlined, including a close-up of its deployment on a map. The set-up of a tank squadron is shown, with the table of organization of the Korps and special rules shown. The main armoured vehicle here is the Leopard 2, backed up by the Leopard 1. A Mechanized Infantry company is shown next, with details on the infantry themselves and the YPR-765 PRI infantry fighting vehicle which supports them. Anti-aircraft elements are PRTL vehicles, based upon West German Gepards and infantry with Stinger ground to air missiles. The Dutch Reconnaissance elements are heavily armed, with the Lynx-like M113 C&V backed up with Leopard 1 and 2 tanks.

The final force described is the improvised ANZAC Brigade, based upon troops supposedly on exercise in the UK at the outbreak of hostilities. Again, the main role of the Brigade is outlined, and a particular action is described. The ANZAC’s are few in number but hit hard, have a number of unique aspects and get their main support from British forces. The main armour in use by the ANZACs is the Leopard AS1, an Australian version of the tank, backed up by such M113 variants as the Medium and Light Reconnaissance Vehicles with their unique turrets. Support elements include Anti-Tank Land Rover sections, plus the Scorpion’s manned by New Zealanders.

There are three scenarios detailed in the book, with maps, special rules, force organisations and more. There are also the usual but useful painting guides and a look at the current and upcoming units for each of the nations discussed.

This supplement does an excellent job of covering these nations that have been added to those available to Team Yankee NATO forces players. The whole supplement adds to the background of the game and presents new units and tactical options. As always, the overall layout of the book, in terms of accessibility and use of photographs of painted miniatures only serves to make this a feast for the eyes.