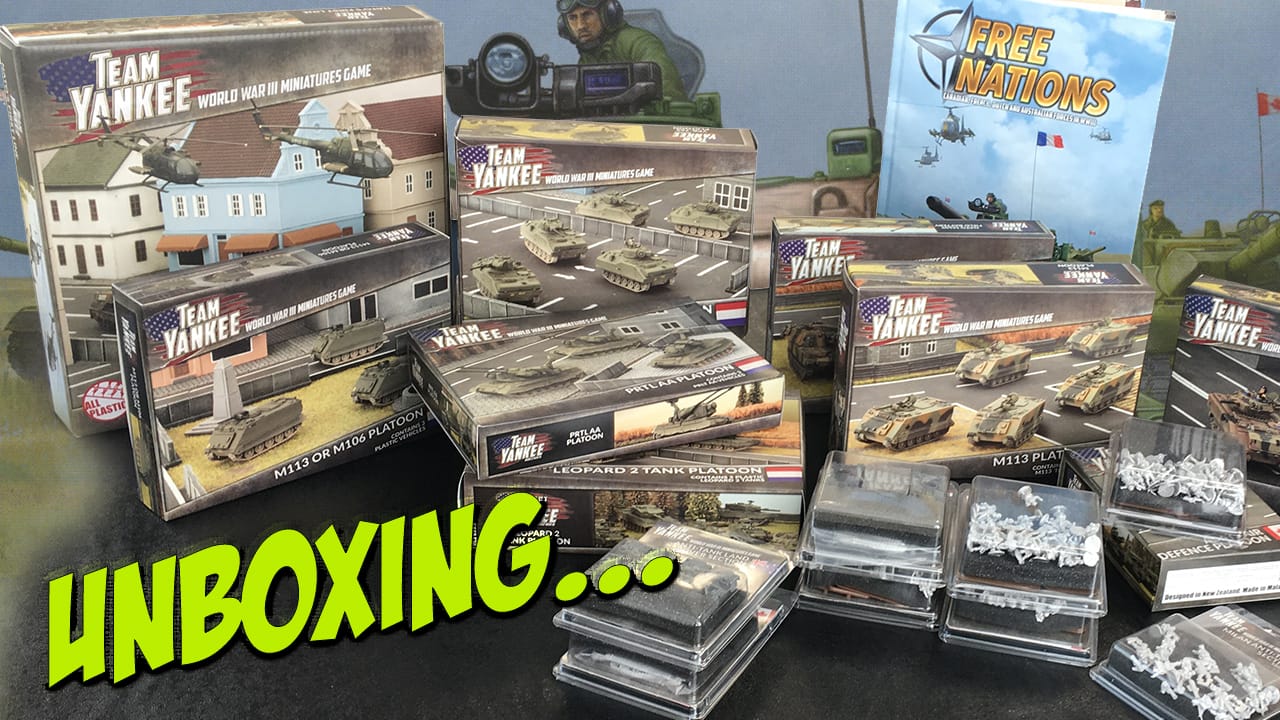 Battlefront have released the first tranche of miniatures to compliment the Free Nations supplement for their Team Yankee rules. NATO forces get some reinforcements in the form of a generic boxed set, plus Dutch, Canadian and Australian infantry and armour.

The generic starter set is entitled NATO’s First Line and consists of all plastic kits. These are 3 Leopard 1 tanks and 2 B)-105 Helicopters. The Leopard 1 was in service with the West German, Dutch and Canadian armies at this time, and the B0-105 helicopter was an airborne strike and reconnaissance asset employed by the same. The set comes with Unit Cards for the German, Dutch and Canadian variants of the Leopard 1, plus decal sheets and a mini-rulebook.

Taking a closer look at the Dutch forces, we have some re-packaged items and some which are unique to the Netherland Army of the mid-1980’s. Two of the re-packaged sets are the M113 and Leopard 2 platoons, all plastic kits with enough parts to make 3 vehicles in the M113 box and 5 in the Leopard 2 box. The PRTL AA platoon use the Dutch version of the Gepard AA from West Germany, whereas the YPR-765 platoon contains 5 vehicles adapted from the M113 chassis, with the option to create turreted APCs or an anti-tank PRAT variant with an Observer vehicle. An M113 variant features one more in the form of the C and V Recon platoon, two vehicles in a blister. Lastly, we have Dutch Armoured Infantry and Stinger platoons, all metal miniatures in blisters, with FN-FAL rifles and M1 pot helmets. The vehicles all come with parts options to create variants, decals and the standard Unit Cards.

The Canadians also get some re-packaged figures, but with some special options. The NATO M109 Field Battery is 3 self-propelled guns with the options to field them with the Canadian or the Dutch barrels. The M113 platoon is more uniquely Canadian as it comes with TOW and Blowpipe Gunners which were used by the Canadians to provide extra ‘punch’ against armoured foes. Speaking of punch, the ADATs Air Defence platoon is on hand to engage those low-flying helos and aircraft, with each of the 2 vehicles launching radar guided missiles. A 2 vehicle Lynx Recce patrol is also here in blister format, and a Mechanised platoon blister is on hand to add some infantry support to the other releases.

Lastly, an Australian Brigade on maneuvers in the UK before the ‘balloon went up’ is on hand to offer their support. Consequently, we have a boxed set containing 2 M113 MRV Fire Support Vehicles, basically a Scorpion turret on the back of an M113 to offer more firepower to recon or mechanised infantry assaults. We also have ‘bush hatted’ mechanised infantry in blister packs, complete with LAW and Carl Gustav launchers and a whole separate Milan Anti-Tank section. And backing all that up is a 5-vehicle Anti-Tank Land Rover section, complete with recoilless rifles and ready to race around the battlefield, seeking to punch above their weight and engage armoured foes.

This first release of just some of the new units available for Team Yankee as outlined in the Free Nations supplement is just the start. But what a start for gamers! The French will be coming soon, meaning there’s never been a better time to sign up with NATO and try to hold back the Soviet and Warsaw Pact hordes.