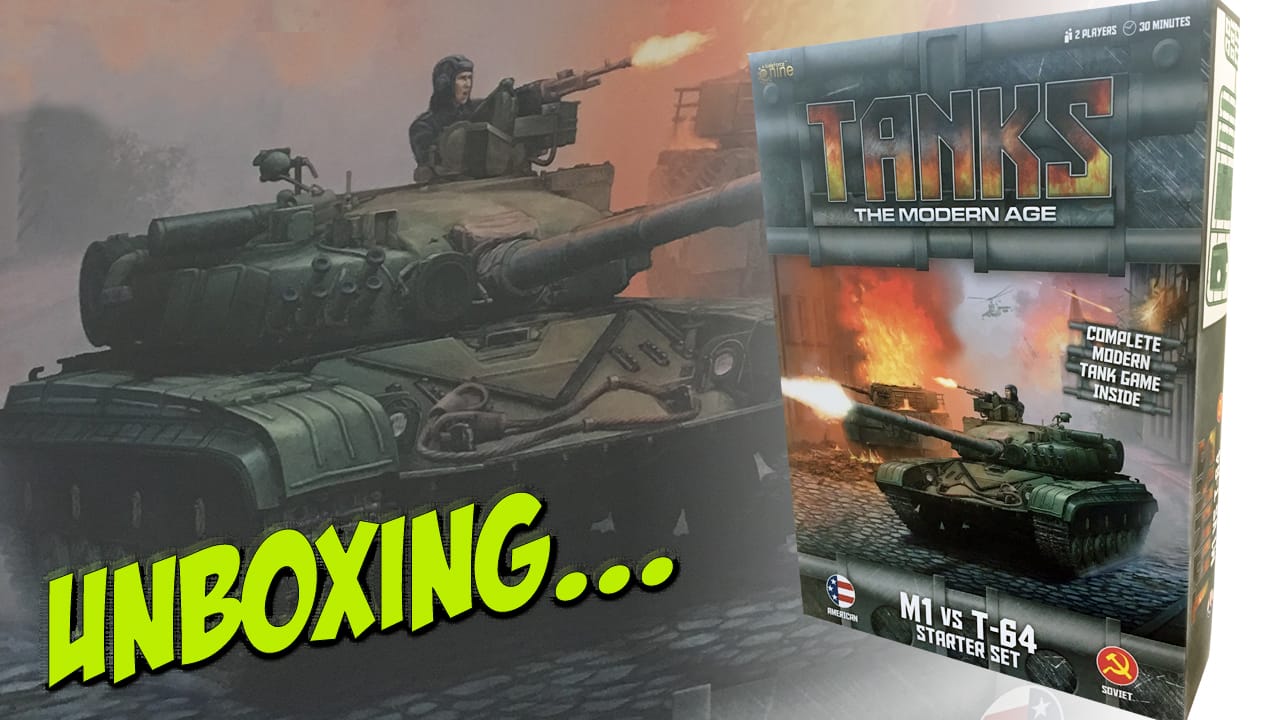 Battlefront have built upon the success of their Tanks game and model range by moving beyond World War Two and offering a similar approach to the post war period. Using their range of Team Yankee models, they have added a new boxed set which contains everything you need to get started, the Tanks The Modern Age two-player starter.

The box itself is made from a fairly sturdy card, meaning it can be used for transport and storage. When opened, the first items to be encountered are the miniatures, with two plastic T-64 tanks and one M1 Abrams. These are standard 15mm self-assembly plastic miniatures, as already released in the Team Yankee range.

Next come the 36 datacards. These contain all the gaming stats and rules for not only the two tanks included but also all the currently available kits from the Team Yankee range. These include tanks for the main factions, the Soviets / Warsaw Pact, West Germany, Great Britain, France and the United States of America. In addition to the main Armoured Fighting Vehicles from each nation, there are also cards for air support assets in the form of helicopters, anti-air tracked vehicles and 5 Platoon formation cards for each nation.

Having picked out your force, its time to enhance it. This is done using the 15 Crew cards, 5 Hero Crew cards, and 17 Upgrade cards. These are used to add particular skills to your vehicle crew or additional abilities to your tank. Also included are 32 Damage cards, used to record the effects of fire on your vehicle and crew.

Moving deeper into the box, the next discovery is the punchboard terrain tiles and tokens, printed upon heavy gauge card. Two double-sided, full colour 2D forest tiles and 4 Cardboard Buildings. There are a host of game tokens, 16 Movement and Destroyed, 28 Damage, 4 Objective, 10 Model ID, 2 Helicopter height tokens and an Advantage, plus 2 Measuring Arrows. There are also 12 dice, 6 red, 6 blue, for use by each of the players.

Finally, at the bottom of the box, is a 28 page, full colour rulebook that contains all the relevant rules for the game, explained with simple to understand diagrams. There are also full details of creating your platoon, 4 Missions, and an introductory game which embraces all the aspects of the rules.

This is another quality product from Battlefront, providing everything needed to embrace a new version of the Tanks rules. Expansion sets are available to add more variety to your games, meaning that there is already some longevity beyond the starter set. If you’re a fan of the World War Two rules, or want to try a basic set of modern rules, these are worth a look.