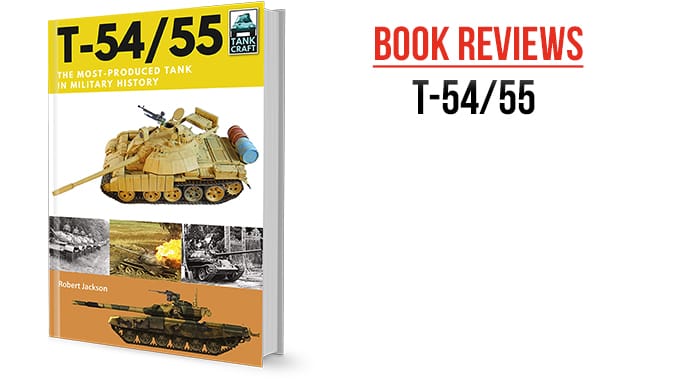 Arguably the most easily recognized Cold War Soviet tank, the T54/55, with its distinctive, rounded dome turret, has been deployed in just about every main theatre of war since the 1950s. It is, therefore, one of the most ubiquitous and important vehicles in military history. With that in mind, Robert Jackson’s survey is a welcome addition to the Pen & Sword Tank Craft series.

In line with the other books in this series, T-54/55 is a 64 page, glossy volume somewhere between a magazine special edition and a coffee-table book. Jackson tells you all you need to know about the tank’s specifications and its developments and variants – you might be surprised at just how many nations have these tanks in their arsenals – including the Chinese version of the T-55. Jackson incorporates many photographs of the tanks, along with some colour-plates and an inspiring modelling section to help with identification and to provide guidance. He concludes with an overview of T-54s and T-55s in action in such places as Hungary, Czechoslovakia, the Middle-East, including Iran-Iraq and Gulf wars, and in Asia, Africa, and Europe, demonstrating the tank’s versatility in all combat environments and climates.

T-54/55 is a useful little book for wargamers, modellers, and military historians. It is well written by a knowledgeable guide, and the artwork is excellent. If you are interested in Cold War era tanks, you can rummage around on the internet, wading through the dross to find the nuggets, or you can purchase this book; an easy choice really.