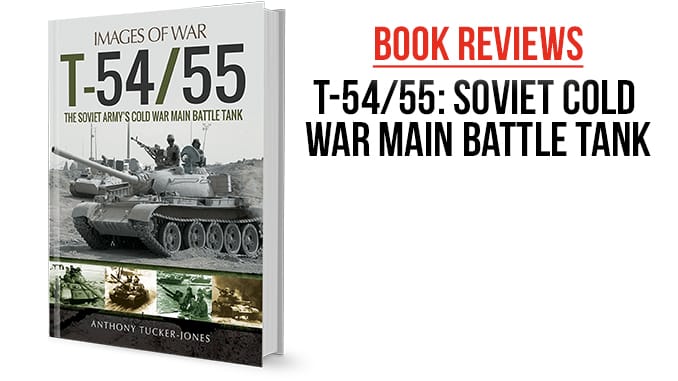 Robert Jackson’s T-54/55 – Soviet Cold War Main Battle Tank marks the 16th release in Pen & Sword’s Tank Craft series, which “aims to provide modelmakers and enthusiasts with a new standard of primarily visual reference” for full-size vehicles and models. The 64-page book includes tons of photograph (both black & white images of the T-54/55 and its spinoffs/variants and color pictures of superb plastic model projects), color plates and text describing the background, equipment and history of this nearly 70-year-old armored fighting vehicle which can still be found in action in some places today. In short, the book offers a good overview of the T-54/55 and shows readers ways to recreate it as a scale model.

The tank’s historical background, vehicular details and deployment across the world make up half the book, with any given page illustrated with two to four photographs. The text-heavy portions bookend the modeler’s centerfold, which offers eight pages of color plates (labeled the Camouflage and Markings chapter), a 16-page modeling showcase and eight pages of modelling products. Each color plate page displays front, back, side and top views of the T-54/54, including a prototype, a T-55A (model 1961) in snow camo, a Czech T-55s, a Chinese Type 59 and the T-55 in Egyptian and Syrian service. The model showcase is divided into four 1:35 scale projects highlighting T-54/55 versions fielded by the Iraqi Defense Force in the 1990-91 Gulf War, the Soviet Army, Israeli Defense Forces (the Tiran 4, in 1968) and 1980s Finland. The model products section reviews a number of 1:35 and 1:72 kits and includes photos of component sprues and decals.

Pen & Sword’s T-54/55 – Soviet Cold War Main Battle Tank makes a great resource for the modelmaker who wants to bring their T-54/55 projects to life. If you want to build a dozen different kinds of T-54/55 models, this book will help you get there. That said, Cold War and post-Cold War period wargamers should find lots of inspiration and information here as well. While the resin 28mm (1:48/1:50/1:56) kits or plastic 15mm (1:00) kits marketed for tabletop games may not have the plethora of options (and pieces!) available in 1:35 kits, their builders can readily find way to add a lot of personality to their projects by perusing the book’s color plates and studying the creative stowage ideas and other extras found in the model showcase.