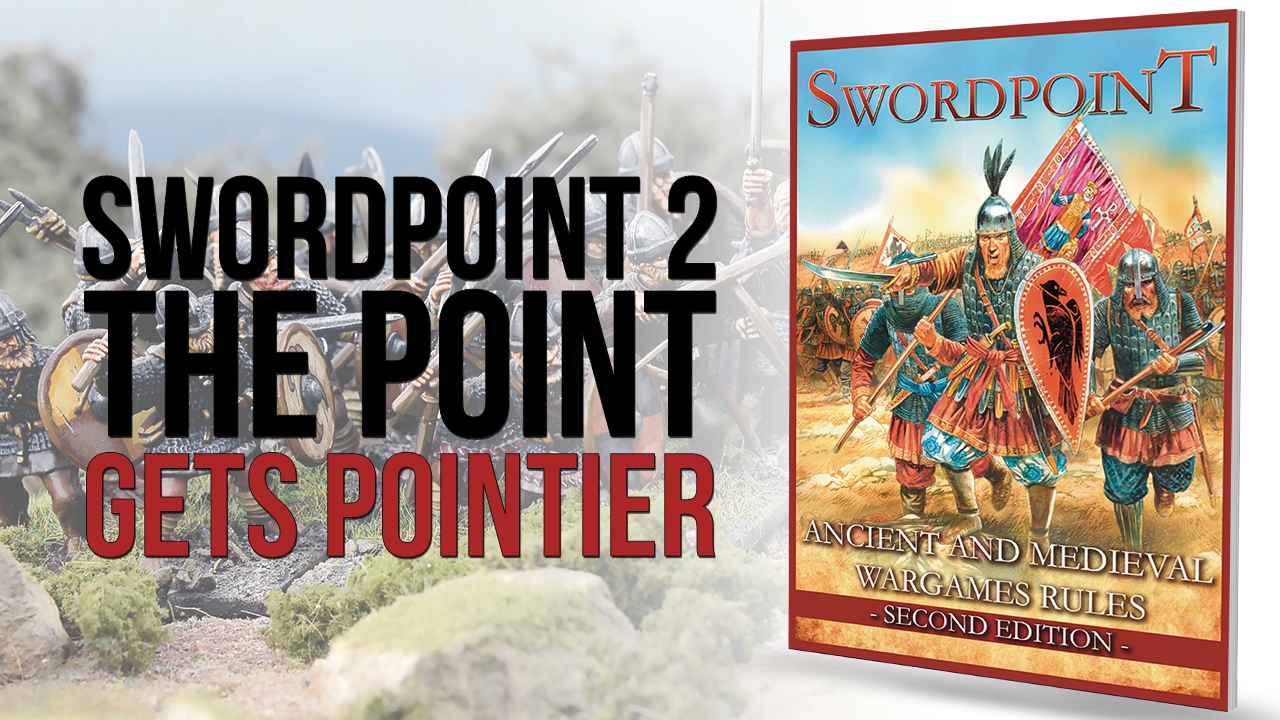 The below text is a transcript of the video, for those who prefer to read rather than to listen.

The book starts with a thorough list of its contents, then dives into an introduction, basic game, and setup details across pages 4 and 5. As the introduction says, these rules are an update rather than a basic reprint or a complex rewrite. There are subtle differences throughout and more updates to the rules for shooting and moving. There’s a new section on Torsion Artillery too and we’ll talk more about all of these when we get to them.

Pages 6 and 7 introduce the game’s Basic Concepts. Always a good idea to list these early on, especially when they’re condensed into short and easy to follow sections. Once you’re through the Winning the Game section on page 8 you should already have a pretty good idea of the ways you’ll need to push around and command units to achieve victory.

The Game Turn, page 9, is where we get into the meat of Swordpoint’s rules and its simultaneous actions gameplay style. Everything is broken into subsections and these have further subheadings. Things are really easy to find if you need to reference back during a game. The images evolve here too, from the evocative battle scenes of the introductory pages (replete with nicely painted Gripping Beast miniatures) to more illustrative photographs of battle. There are top-down examples that illustrate the concepts being covered too –useful stuff and reflective of the high production value.

Before we talk about Swordpoint’s look any further we need to do our due diligence and say that we at Wargames Illustrated had a hand in this book’s graphic design. We think the look and layout speak for themselves but if you’re the cynical sort, feel free to take what we say with a grain of salt. A grain of salt that, in the hands of our design team, would look as lovely as the layout of the Swordpoint Second Edition rules!

But back to it! It’s once the book gets to the Shooting Phase that fans of Swordpoint will start to see some core updates. The designers have responded to their community and reduced the overall deadliness of shooting units while maintaining the danger they pose under the command of an astute General.

The Movement Phase, covered between pages 14 and 21, is a detailed look at one of the more complex areas of the game. This phase was something that players could exploit in the original Swordpoint. The designers have firmed up the descriptions and added clarity through the addition of many more top down examples instead of changing these rules. This results in an impressively thorough section that covers all but the most extreme, edge-case possibilities you may encounter.

The Combat Phase on pages 22 to 29 is equally thorough and tackles the combat sequence’s steps one-by-one. There are box outs for additional rules that go beyond the basics, making everything easy to digest. If you’re not inspired to start a new army after flicking through the book and taking in the photos of the diverse armies shown… well… you might have stumbled on this video by mistake!

Once you’re through short sections on Cohesion, Command Figures, and Order you’ll have all the basic knowledge needed to play a game. Not bad for just 35 pages into the book. Veterans of Swordpoint will see, by this point, there aren’t exactly sweeping changes. This Second Edition is a chance to tweak and improve rather than a revelatory new beginning. With a game enjoyed by as many players as Swordpoint that’s for the best – these changes should, above all, be a huge ‘quality of life’ improvement when gaming and will be more welcoming to new players.

Pages 36 to 39 look at some of the Specialist Forces that can be chosen in your armies. Chariots are much the same, Elephants have changes to their stampede rules, and there’s the new section on Torsion Artillery we mentioned earlier. This will bring a new dimension to siege battles in particular.

Special Rules are covered in the next four pages and bring flavour to the units you’ll use in your games and the Reference Section on pages 44 and 45 rounds out the rules with summarised details of modifiers. Very handy when you need to check something in the heat of battle.

Talking of checking things, we’re going to skip to the last pages of the book and the comprehensive Index. This is something we wish all games would put as much attention into. It’s broken down in… well, the exact way an index should be! Want to check up on Elephants? Swordpoint Second Edition has you covered! There’s the reference to the basic Elephant rules on pages 39 to 41, then a thorough list of the various other times they might occur in the rules. What if the elephant was in combat? That’s covered in the combat sub-section on elephants too. Heck, they’re even referenced if you went as granular as looking up the casualties element of combat.

But we’ve gotten ahead of ourselves in the flipping, back to page 46 and the Scenarios section which, thanks to the game’s army lists now being in separate publications, have been slotted in in their place. Having structured scenarios often guides play and creates more dynamic and challenging battles, so this seems like a great inclusion.

And that’s it. A great update to an already popular set of rules, with improved layout and extra clarity in its writing. If you’re not sold on the printed version, you can even take a look at a free PDF that covers all the changes between this and the first edition.