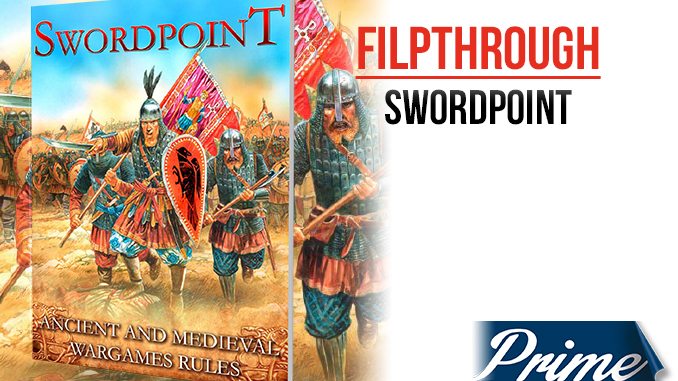 In Wargames Illustrated 348 (available in the Vault if you missed it), we featured a Rules Showcase article introducing you to the forthcoming ‘Swordpoint’ mass combat rules from Gripping Beast. Below we take a look at some of the pages from the book and provide  a brief overview of some of the rules.

All units are formed up for movement and combat in formations of one, two or more bases deep, with each row having the same number of bases, except for the rear, which may have fewer than the front. Units must be at least three bases wide in order to qualify for a number of benefits associated with depth.

The game turn breaks down into four distinct phases. The first is the Initial Phase. This is where troops that have suffered a potential Loss of Cohesion, due to instances such as seeing routing friendly units or a General / Commander being killed, take a test.

After the Initial Phase comes Shooting. All units on both sides who are capable of using missile weapons have the option to do so. All shooting is simultaneous, so the order in which units shoot doesn’t matter.

The Movement phase now commences. A unit which shot during the Shooting phase may still move. Movement is based upon Initiative order, which is diced for using a D6. Momentum tokens may be used to increase the final score.

The Combat phase is another opportunity to use Momentum tokens, using the same systems as that employed in the Initial phase. All combat is simultaneous, so losses are on a combat-by-combat basis. Weaponry and special abilities of troops, as noted on the army lists, decide if one side strikes before the other in each combat.

A Cohesion Test is taken as a result of combat, seeing friendly forces fleeing, the General being killed, 25% casualties being suffered and being charged in the flank or rear. Modifiers apply and are added or subtracted from the unit’s Cohesion value.

Depending upon the information in their Army List, units may adopt a number of formations. Infantry will probably enter the battlefield in a dispersed formation, moving into close order when the enemy is near. Skirmishers and those infantry types designated may act in open order formation, allowing them to move more freely.

A number of units are able to carry out actions that the more ‘rank and file’ cannot. These are the more specialist or Elite formations and are noted as part of your army list.

There are a number of sample army lists, allowing you to adapt forces you already have or create new armies.