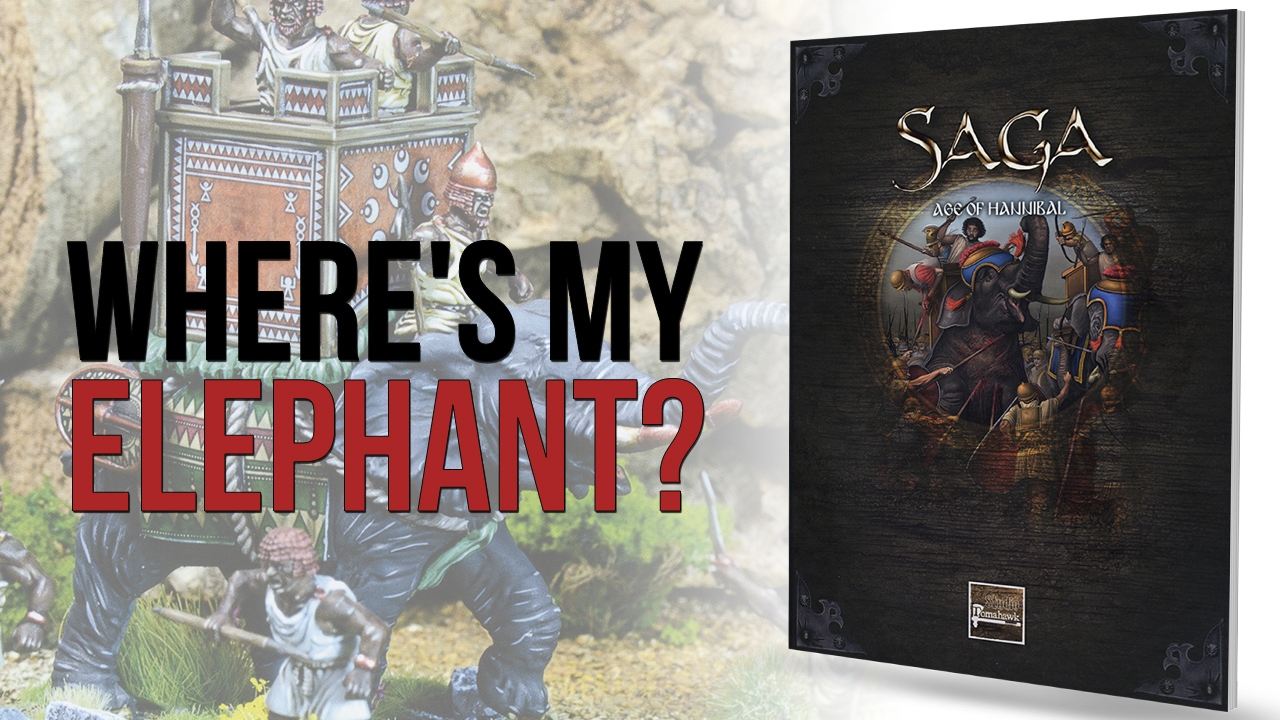 Another year, another new Saga universe to take a look at. This time we’re heading to the late BCs of the Second Punic War, a rich vein of historical flavour to tap; one the folks behind Saga have syphoned with their usual style and aplomb.

The book itself is the standard Saga Supplement format and will be familiar to current players. It’s a beautifully designed, hardback and comes with battleboards. We wonder if there is any way to adjust the design slightly, so the boards fit flat within the cover, but that’s a minor gripe. Six boards are included, each representing one of the new factions.

Pages 5 to 7 are a whistle-stop tour of the Age of Hannibal, including one of many inspirational battle scenes photographed for the book, featuring fine Gripping Beast (and other manufacturer’s) models and lovely scenery.

The ‘How To Use This Supplement’ section, from page 8, will be familiar to Saga fans. As usual, it explains the battleboards to players then gets into some useful Hannibal specific suggestions.

The book also displays the difficulty level of commanding each faction. A handy guide; Iberians look to be the most difficult to master this time around, with Romans and Graeculi the most forgiving for novice players. There’s the first sight of the new dice that are in production for the factions too. Not included, but we got our hands on some and can confirm that they roll in that rolly way that dice are supposed to.

New Rules and Equipment are on pages 12 and 13 and contain some awesome details. Not making it to the top end of the excitement scale are the Sarissa and Chariots; Sarissas limit movement but are every effective against mounted enemies, while Chariots provide some mobility and bonuses at the expense of being unable to traverse terrain.

The fun stuff, though – Elephants and War Pigs – will surely bring a smile to all. Elephants are THE troop associated with Hannibal and will hit hard, with ‘Trampling’ and ‘Mad with Pain’ special rules, bringing much pachyderm potential and pachyderm panic.

Countering those Elephants are the legendary War Pigs, who are covered in spikes, set ablaze, and gloriously ridiculous.

Ruses come next, on page 14. One of two new game options provided in this book, they come in two forms:

The Ruses are all available to download from the Studio Tomahawk website; this is the only way to see the Generic Ruses at this time and it means you don’t need to destroy your book to cut out the Unique ones that are at the end of each Faction section.

Ruses allow you to upgrade units, move terrain, move units, generate Saga dice, and more. The effects these can have will be game changing; it is suggested they are kept for when you have more experience with the factions.

Talking of which, on to those factions, six in total, that make up the meat of the book. Let’s be honest, they’re kind of the reason why we are all here in this flipthrough, and happily there’s a lot to take in.

First up are the Carthaginians. As with all the factions pages, each section begins with a historical background – the Carthaginians get quite a meaty one – before the Troops are explored, Faction Rules are laid out, and the Units and Legendary Units are listed.

But that’s not all, each Faction section ends with a summary of their play style and tactics. These are relayed by Diodorus of Sicily, a Greek historian of antiquity with quite the pedigree. Using him as a characterful voice to describe Factions is just one of many design flourishes throughout the book.

Once Diodore has handed out his advice (genuinely useful stuff and especially good at giving a tactical overview of what a Faction is about before you invest in models) each Faction’s section ends with its Unique Ruses.

Rather than go into exacting detail on the specifics of the Factions we’ll give a quick overview. If you want to know more, fear not! We’ve got a deep dive into this book coming up in the December 2020 issue of Wargames Illustrated, so keep an eye out for that.

So, that was the Carthaginians, who can mix Citizens, Contingents and unaffiliated among their usual troops, as well as bringing the power of Elephants and Heavy Chariots to battle.

Stopping Carthage’s dominance is the Republic of Rome. In Saga terms they have two types of warlord – a Consul and Tribune, and while their troop types are nothing too unusual, their Warriors and Hearthguards can be Maniple units.

Gauls are next on page 34 and get their own game mechanic – Fervour. This allows you to improve battleboard abilities but there is a limit – once a unit has three Fervour it cannot use any advanced abilities.

You can see the rules for Viridomarus, King of the Gaestae here – each faction has two Legendary Units. Viridomarus is a mercenary leader and fighter who brings along a bunch of naked mates to battle, ignoring uneven terrain and able close ranks while using javelins.

The Graeculi have been split into three flavours; Epirote, Syracusan, or Italiotes, with minor differences between them.

The Iberians’ section begins on page 51. Like their Gallic cousins they have their own mechanic – Guerrilla, which uses generated tokens to activate units or perform abilities from their board.

Their Unique Ruses are in fitting with the guerrilla warfare style of the Iberians. ‘Harassment’ causes Fatigue to enemies as they deploy. ‘Trap’ causes casualties to units moving through uneven ground.

Numidians have no Hearthguard at all! This is balanced by being able to recruit masses of elephants. They are a force reliant on cavalry and shooting; their battleboard feeds into that.

With the six factions done Mercenaries can add variety to your army. Their section starts on page 66 and comes with a handy guide to cross-reference who can take each of the eight units for hire. Each Mercenary unit has their own roles and niches on the battlefield. These are covered until the book’s final section on page 70 …

EPIC SAGA!!! Epic Saga gives players the rules to act out big games, to combine warbands, to make mass-armies, to get together with fellow gamers and fight together in multiplayer games … not the best timing while we live in these constrained times but exciting all the same.

Games are between 12 and 18 points, there are three warbands on each side, and at least half the points must be spent on one faction.

Warbands are assigned a sequence number by their commander, determining their order, which will lead to some interesting tactical decisions. Warbands that use the same board literally use the same board, allowing dice to be left to bolster those future actions.

Victory is determined by morale; once two warbands on one side have failed and become demoralised they have been defeated.

To counter this, Commanders get Inspiration points to spend on abilities, which affect certain aspects of the fights and really impact demoralised warbands.

Epic Saga looks packed with potential and this book is another wonderful addition to the Saga world. There seems to be a lot of balance, and if you like this period or skirmish games (or both) it feels like a must buy. Did we mention it has elephants and war pigs?