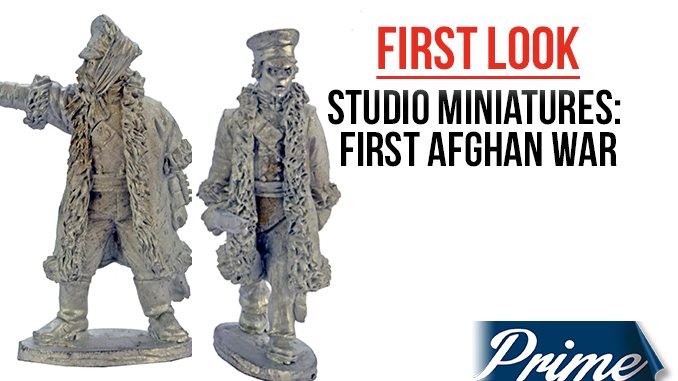 After a successful Kickstarter, Studio Miniatures have created a First Afghan War (1839 – 42) range. These have been offered for general sale at a number of shows following delivery of the pledges. These are so new at the time of writing that they have only been shown as ‘greens’ on the company’s Facebook page and those interested should contact the company via their website.

The first pack is AWB001, three British Officers, including Captain Souter of the 44th Regiment, who wrapped the regimental colours around his waist during the Last Stand at Gandamack. All three of these officers are wearing the poshteen, a warm coat created from the fleece of a sheep or a goat. These have been excellently sculpted by Paul Hicks and have a real sense of character.

The next pack is AWB004, consisting of six infantry in greatcoat and bell-topped shako, all in marching poses. Again, these are typical of the ill-fated 44th Regiment who suffered so harshly during the infamous Retreat to Kabul.

To complement the basic infantry pack is AWB003, three miniatures designed to represent an Infantry Command group consisting of two colour bearers and a drummer. Like the previous pack, these have been sculpted by Nick Collier and are in a similar marching pose.

More of Nick’s sculpting magic can be found in NFA010, a new pack of four Afghan Tribesmen Running, suitable for service not only in the First Afghan War but arguably throughout the period of the Great Game. These are nice, active poses that convey the sense of wild Afghan tribesmen.

The final pack is NFA008, the third Afghan Tribal Command group from this company, again suitable for pretty much the whole 19th Century or even before. We have a tribal leader, standard bearer and a drummer in this pack, providing three figures in total.

These and a host of other releases are just part of the offerings from the company. There will soon be a re-release of a revamped series of Sikh War packs, plus the company already has some excellent North West Frontier British and Afghans for the 1890’s. Why not visit the website at www.studiominiatures.com for more details and a good browse of the historical and non-historical fare on offer?