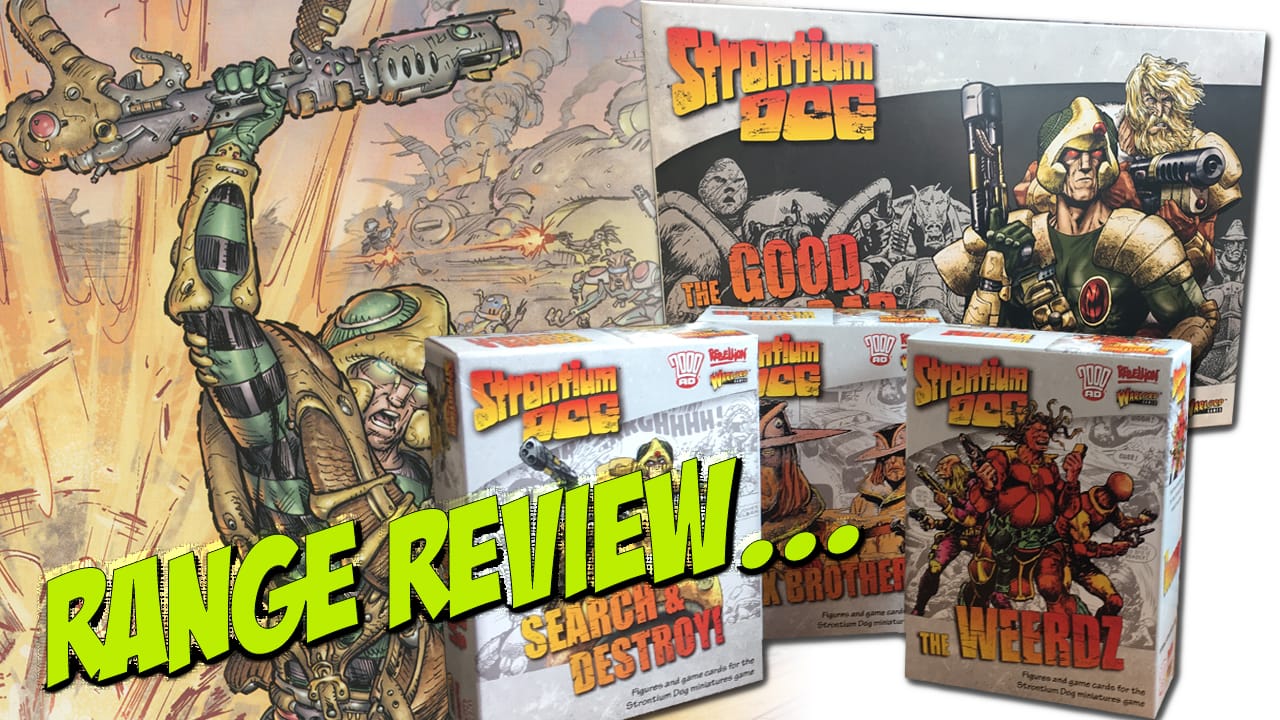 The Strontium Dog Miniatures Game from Warlord Games is a skirmish level game set within a galaxy of adventure, one where mutants, aliens and humans vie with one another. Of course, crime still pays, which means the Search Destroy Agency, known as the Strontium Dogs, get to collect bounties for those who break the Law.

We have one of every initial release for this fast playing game, which we feature in more detail in WI370, our August issue. Right now, let’s take a look at what’s on offer and the different avenues that have been provided by Warlord to get gamers started in this fantastic universe torn from the pages of internationally renowned comic 2000AD.

First of all, we have the rulebook-only option. This is a soft cover book printed to a high standard, and begins with an outline of the Strontium Dog universe before plunging into the rules. The game uses character cards for each miniature, with a profile for each, an outline of the various attributes, special rules and stats that offer a series of recognizable characters. The game is played using special, themed combat dice, which have been made available as a separate clamshell purchase. Many of the existing characters and their weapons and gear from the comic book stories are outlined, and there are examples of the Armoury and Chicanery cards printed at the rear of the book which may be photocopied for use. A nice touch is the inclusion of a character design section, allowing you to pretty much ‘Build Your Own Mutant’, which may be something we’ll see released as a box of miniatures in the future. There are details of 13 scenarios and a fully realized campaign system to be found, making this a really useful rulebook for those who love the narrative style of gaming. Plus, if you buy the rulebook directly from Warlord, you also receive a unique miniature, representing comic book lead character Johnny Alpha with his trademark close combat weapon, the Electronux.

The rulebook is good value in itself, but surely even better value is provided by the aptly named The Good, The Bad & The Mutie boxed set. This weighty box contains not only the softcover rulebook and combat dice, it also includes miniatures of Johnny Alpha, his bounty hunting partner Wulf Sternhammer and the medically inclined Gronk, facing off against the notorious Max Bubba and his gang, all 8 miniatures being based upon the comic book characters. Plus, all the miniature characters have a card detailing their stats and special rules, the Armoury and Chicanery cards are all here ready printed, there are two frames of the new 2000AD game tokens and, if that wasn’t enough, a lot of the overall weight is made up of a laser-cut MDF building from Sarissa Precision, representing a solar farm, the type of dwelling found out in the Badlands of many a planet. Every thing you need to create your first few stories.

Of course, this is a universe with a cast of thousands, so you’ll need more miniatures to create new narratives. Never fear, as Warlord have you covered with boxed and clamshelled figure based upon yet more classic characters, equipment and the ‘Extras’ that can appear. The Stix Brothers and The Weerdz are available in two separate boxed sets. The Stix are hardcore Search Destroy agents, devoid of morals and part of a mutant family who all look the same. You get three figures in the box, plus a single character card (hey, they ‘re all the same!), 2 additional Armoury cards and 1 Chicanery. The Weerdz are former Search Destroy operatives, a trio of mutants, again from the same family, but with very a very different look. They are enemies of Johnny Alpha, and seek to gain revenge for past wrongs. There are three figures in the box, plus a character card for each brother, 2 Armoury cards and 1 Chicanery card.

In terms of equipment, one of the iconic modes of transport seen in the comics is the ‘skimmer’, a ground effect vehicle akin to a motorcycle that is used by Search Destroy agents and criminals alike. The Search & Destroy boxed set contains resin and metal figures of Johnny, Wulf and the Gronk mounted on skimmers, with 2 character cards, 2 Armoury cards and 1 Chicanery card. It may be possible, with a little work, to fix other miniatures onto the skimmers to add some fast attack or recon abilities to your force.

Last, and by no means least, we have a clamshell containing three Strontium Dog Goons. These come without any cards but are intended to represent the types of ‘Norms’ or non-mutated humans encountered across the galaxy. They could be used as Auxiliary lawmen or as criminal gang members in the game, or could perhaps be used as the basis for the creation of a player’s own characters. Whatever you decide to do with them, these are just the sort of generic, background ‘extras’ that a game of this type needs.

The rulebook, cards, tokens, terrain and the all important miniatures are of a high quality, as you would expect from Warlord. This is a set of rules that pretty much guarantees a fast moving gaming experience where every die roll or decision matters. The specialized dice, use of cards and attention to detail of the rules all combine to help create a real sense of being a part of the Strontium Dog and 2000AD universe.