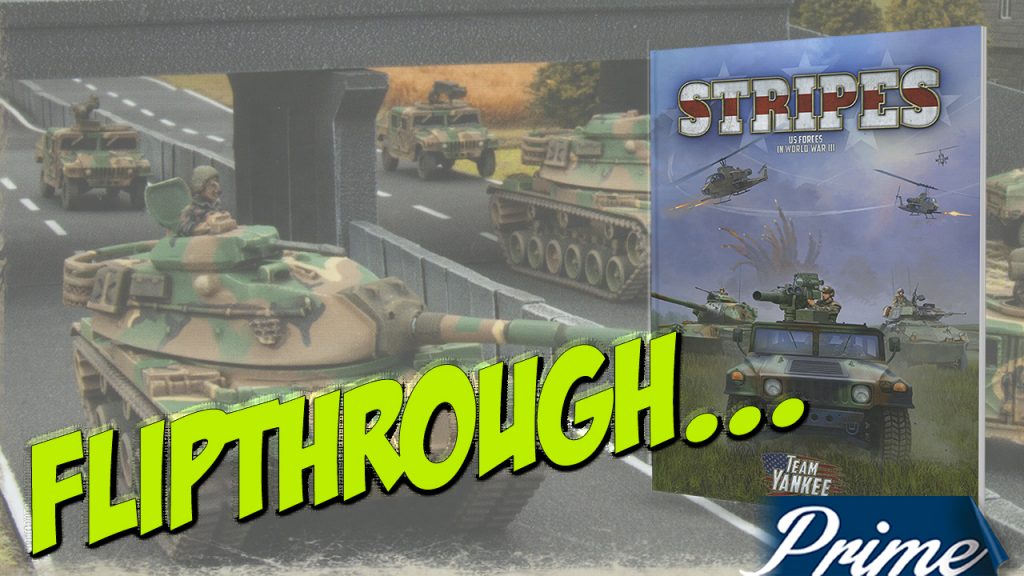 The latest supplement for the Team Yankee rules system, Stripes, focuses upon more of the US forces deployed to fight in a fictional World War III. The book follows the standard Team Yankee format, adding additional unit choices and new weaponry to US players.

The book begins with an account of the deployment and first few battles of three different members of the US 7th Corps: the 1st Armored Division, the 2nd Marine Division and the 82nd Airborne Division, plus the relevant support elements for the Marines and Combat Team Alpha. There are also some nice ‘action shots’ of miniatures. All these facets add flavour to the game and lift the book from simply being army lists to part of the overall narrative of a semi-historical, alternate history.

Of course, the army lists are what every Team Yankee gamer really wants, so that’s what you get! The usual clear layout is here, as shown by these double page spreads of sample Divisional, Battalion, Company and Platoon level organisations.

There are also all the statistics and in game details for several of new units to add to your US forces, including the M60 Patton tank, HMMWV (Humvee) in various guises, the UH-1 Huey helicopter, the M551 Sheridan light tank, the M8 Chaparral and M247 Sergeant York anti-aircraft support weapons, the US Marine version of the M60 Patton, AAVP7 Transport and the LAV variants.

In addition, the US Marine AV-8 “Harrier’ features as a support option, complete with Special Rules.

There are three scenarios included with this supplement, forming part of the narrative of Captain Buck Taylor’s Combat Team Alpha and his men as they attempt to delay and push back the Warsaw Pact units. These are clearly laid out with maps, force descriptions and all the other information you could need.

The rear of the book continues to deliver, with painting guides and photographs of completed miniatures, including shots of the new plastic and resin versions of the various tanks and vehicles.

Another gaming resource that is actually much more. Some nice narrative touches serve to advance the ‘story’ of the Third World War that never was, plus technical details on the actual vehicles and equipment will satisfy ‘tread heads’ and others. New force options and game stats for the USA help to provide even more choice for those who aim to defeat the Soviet advance into Western Europe.