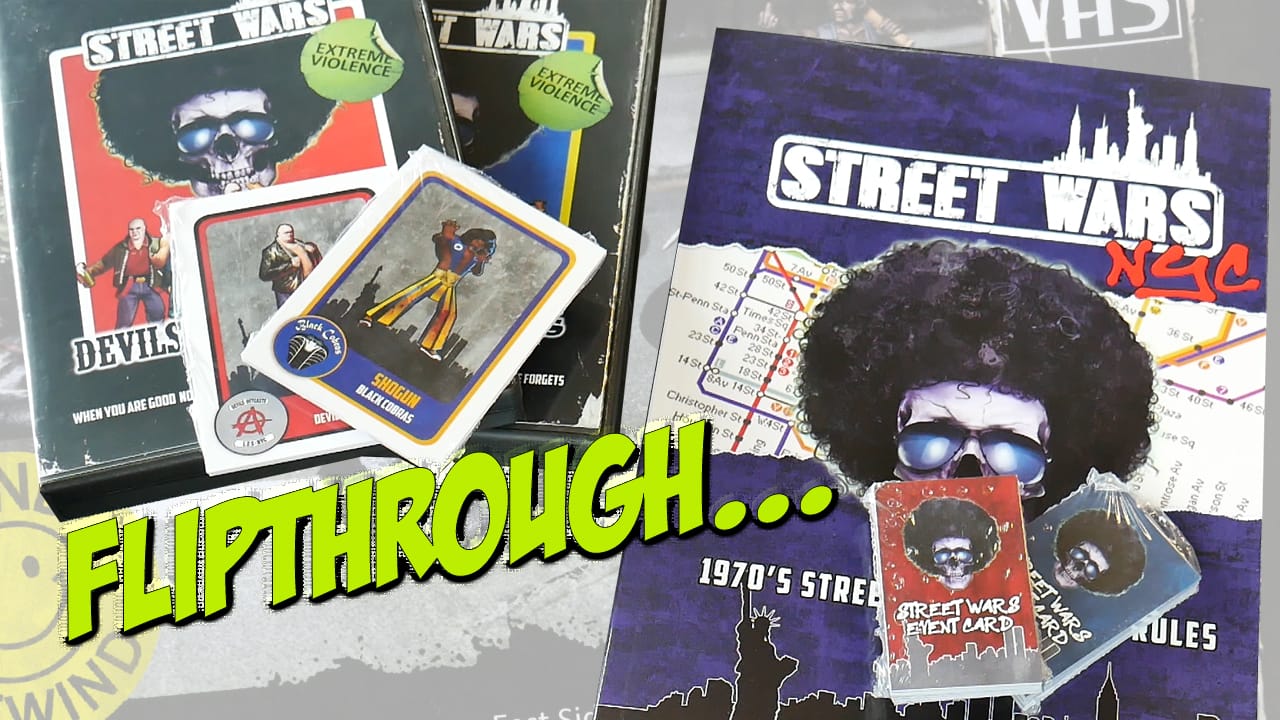 Funky Skull Games is a new company that used Kickstarter to fund their first game, Street Wars NYC. As the name implies, this is a set of street gang skirmish rules, set within the background of a mid- to late- 1970’s New York City.

The introductory pages outline the various items needed to play, plus provides examples of the stat and event cards that are used within the game. These are clearly set out and simple to understand, with a good explanation of each aspect and its use in the game. A nice touch is the suggestion for a 1970’s soundtrack to be played during games or as a prelude.

This pattern of clearly defined and explained rules continues into the Basic Rules section.

The fundamental mechanics are the use of different dice for different levels of characters, with a D10 down to a D6. The rules use a mix of opposed rolls and target numbers, with some modifiers in the form of either + or – values or a ‘dice shift’, with perhaps a D10 character moving down to a D8 or vice versa.

A simple mechanic for target number success is the use of a 4 or more always being a success.

The turn sequence has four main phases, with players rolling for initiative each turn, the winning player using the Funk dice of each of their characters to activate. If successful, the player declares what that figure will do, the opposing player gets to use an Event card if they wish, the activated figure performs an action and then continues with the next. Activations are Successful (4+), Unsuccessful (2 -3) or a Fumble (1). If a player rolls a Fumble, the initiative passes to the other side.

Movement, Skill, Fight and Ranged rules are illustrated by photographs and diagrams which show what can be attempted. In addition, there are tables after most of the basic action rules, which outline the results of Success, Fail and Fumble. This is useful as you have a ‘definitive’ statement of what happens rather than having to discuss it.

Most combat is at close range, with ranged attacks mainly being focused upon throwing bricks, rubble, improvised explosives, like Molotov cocktails, and using pistols.

In addition to the standard activations, Warlords may attempt a Skill test (4+ to pass) to use each of their 3 Command Points. These can be used to activate Gangers who have already activated that turn, Rallying gang members whose morale is suffering, and motivating all those within command radius to move using Follow Me.

Damage is calculated after attempts to avoid it, with any damage causing an automatic ‘dice shift’ to a lower dice for each stat. A chart is used to find out what has happened to gang members who have suffered damage, with each hit point beyond the first acting as a -1 to a D6 result. Gangers can be Wasted, Knocked Out or Stunned, with the higher the roll result, the better.

Recovery and End of Turn allow individual gang members to get back into the fight and the chance of your whole gang suffering a loss of Morale.

In addition, all this fighting can result in the chance of the NYPD turning up, represented by Street Cops. The Cops and Citizens of New York are a part of the game, with the former being a playable faction and the latter acting as Loot Objectives or ‘table dressing’ as desired.

The remainder of the rulebook outlines the method used to ‘recruit’ your gang, including arming them, rolling for Special Abilities, a guide to setting up a game and the potential scenarios and, probably the main focus of a game of this type, putting together a narrative Campaign.

The game also includes a basic map of New York and a series of scenarios that can be played through in any order or from first to last. There are also descriptions of the first two gangs to be released as miniatures with stat cards; the Devils Outcasts and Black Cobras. Future gang releases are also highlighted towards the rear of the book, as are additional characters that may be recruited to your gang, plus all the tokens you need to play the game and a reference sheet.

The rules for this game seem simple to learn but hard to master, with the need to ensure that your gang covers as many of the various useful ganger aspects as possible.

The overall layout and graphic style oozes 1970’s America, albeit a version perhaps more akin to a genre of movies and TV shows than actually existed. The use of dice shifting, event and stat cards is not new but adds interest to the experience of playing the game. For a first offering from a fledgling company, this is a high quality product and a nicely realized game system that offers some potentially enjoyable game play.