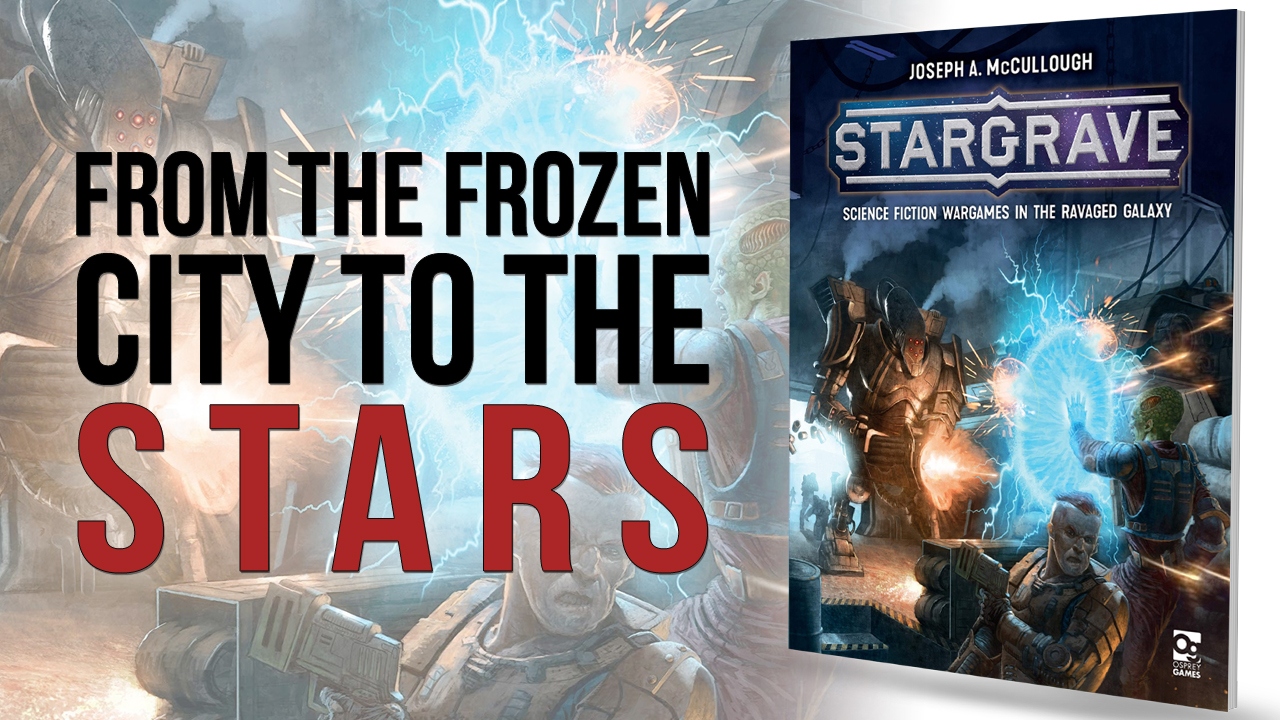 We all told ourselves how productive this pandemic and its associated Lockdowns would let us be. While most of us have only really upped our biscuit eating game Mr Joseph A. McCullough has actualised the sort of productivity we were all dreaming of in early 2020. Not content with expansions for his fantasy regimental battler Oathmark and his fantasy Skirmish game Frostgrave, he’s now got a whole new sci-fi game for us to flip through – Stargrave.

After an incredibly vague “the Last War tore apart the galaxy and left it ripe for roaming mercenaries” type intro (which is just begging for you to make your own narrative stamp on it) things get going with the basics of What You Will Need to Play. No shocks here – minis, dice, a table, terrain, and a crew sheet and templates.

With that out of the way we get to the good stuff and Chapter One is Assembling A Crew… but let’s pause for a moment and answer the question that’s been on everyone’s lips from the start – no, Stargrave isn’t just Frostgrave with lasers and spaceships!

We can’t stress this enough and needed to get it said from the outset. Partly because the two games do tread common ground in various ways, even the futuristic doppelganger cover art. Stargrave certainly uses a very similar book and chapter structure to Frostgrave’s Second Edition and shares some of the fundamentals from the game. Rest assured, there are more than enough tweaks, changes, and additions to make this a different challenge and have us itching to get gaming.

Ok, on with the flipthrough!

The leaders of your crew switch from wizard and apprentice in Frostgrave to Captain and First Mate. This isn’t just flavourful name changing, it will alter your crew’s formation from the top down, and your captain is chosen from one of eight backgrounds while your First Mate can be chosen from a totally different one of those same eight backgrounds. This instantly makes for wide tactical and narrative possibilities.

The options here are flavourful and diverse with each choice boosting certain stats (some of which you will need to decide between options on) as well as giving you a list of Core Powers to select from. The backgrounds include genetically modified Biomorphs, Han Solo type Rogues, more technologically attuned Robotics Experts and Tekkers, and Mal Reynolds type Veterans. Captains choose five Core Powers, three to four of which must be from their own list. First Mates function in a similar way, with their own stat modifications and a reduced number of Core Power choices.

After that you bulk out the rest of your crew – split into Standard Soldiers and Specialist Soldiers – with up to four specialists allowed and a maximum crew size of ten. You can make any of these into robots when you pick them, which changes the way they interact with some of the rules and Core Abilities. This crew gets armed with a range of equipment, listed at the end of the chapter, and it’s obvious that Stargrave is a game ideally suited to playing out a wide range of sci-fi backgrounds, be they your own, or existing ones.

Chapter Two is where the rules proper kick in. There’s table setup, loot placement, then a turn sequence that runs through initiative determination, followed by activation phases – the Captain Phase where your captain and selected nearby soldiers activate, the First Mate Phase (which functions the same), and the Soldier Phase where remaining crew do their thing. The creature phase rounds things out – the NPCs activating via a simple AI type procedure.

Much of this and the following activation and movement will feel very familiar to Frostgrave players but if it ain’t broke don’t go tweaking. There’s similarities in the Combat section too, but we find the multiple combats examples given here clearer. After that chapter it’s Shooting and here, as you might expect in a game with lots of guns, there’s various points of interest. Crits – an optional rule in Frostgrave – are baked in, meaning that on a roll of 20 you win combat or auto hit with a shooting attack and do extra damage. Not covered in this part, but we’ll mention them now anyway, are interesting extras like grenades and flamethrowers.

Powers are at the core of your Captain and First Mate’s abilities and there are some simple rules attached to using them that, we suspect, will have a pretty big gameplay impact. In Frostgrave wizards can choose to empower their spells – trading health for power – and in Stargrave a system called Exertion works in much the same way for powers. There’s an additional system, though – any power with a Strain value greater than 0 will do damage (equal to Strain) to the one using it, and that’s regardless of Exertion. This means that there is an ongoing cost to using some of the potentially more game impactful powers, especially if combined with Exertion, and that cost is to your most vital commodity – the ability to stay alive!

Perhaps to counter this new negative a Power Move has been added. A player may make a 3” move before or after using a Core Power. We really like this as it allows your characters to pop off a power before ducking into cover or make up that last bit of ground to open up a line-of-sight angle. You’re always allowed this move too, even if the power fails.

Rounding out the gameplay rules are Loot collection (more on Loot later) and a basic AI table for how the uncontrolled creatures (which in many cases will actually be humanoids) act. This is really simple and there’s one slightly befuddling consequence – missile weapon ‘creatures’ will fire at a target that is in line of sight and range but, otherwise, they will not move towards a possible target. Instead, they just move randomly. It’s not a huge thing but perhaps our one very minor quibble that leaps off the page.

That’s it for rules. The last 100+ pages consist of the wider gameplay possibilities and focus on narrative campaigns first. This lets Joe get into territory he’s well known for – the between battle consequences, with the concerns of injury and death, followed by the more positive stuff that will happen to your crew. First on the “woo hoo!” list is experience; your crew has the potential to earn a maximum of 300 points per game, through achieving various goals. By spending this experience, you can level up your Captain or First Mate with each 100 points representing a level increase and every level change bringing an improvement. What improvement? Well, there’s a table to check – there are all kinds of tables actually, and with Joe behind the columns’ contents they’re usually fun to reference – but in this case it tells you if your new level unlocked a new Power, unlocked a stat, or made it easier to perform a Power by lowering the Activation Number.

You’ll also get loot from the battle and it’s split into two types – physical and data. Data functions as a means to money, experience (through information), and tech and secret unlocks. Physical is, well, physical items. That in itself is a change from Frostgrave’s singular treasure table but the split factors into the game. Physical loot has to be unlocked before it is collected, then physically lugged around the battlefield (encumbering the one who grabbed it) and can change hands over the course of the game. Data is unlocked too and can be done with the aid of different skills, but once that’s done it incurs no penalties on your model. This makes for gameplay where certain specialists may head for one kind of loot while others need backup to get physical supplies out of battle.

There’s a black market feel to buying loot post-game – less items are readily available than in Frostgrave and they are determined randomly from a big table of options. It adds to the feel of a crew doing their best to scrape through in the vastness of space. There are pages of items you’ll want to get your hands on, ranging from Grappleguns to Gravity Suppressors, Jet Boots to Plasmablasters, Robot Repair Kits to Swiftsuits. Those are just the advanced tech, there are alien artefacts too! Here’s where you’ll get all the goodies you dreamed of as a child with the Blessed Horthath and Garkon Tick foremost in the “say what?” naming category.

You can spend loot on more crew or upgrades to your ship – the vessel you travel around and live in.

Chapter Four gets into Powers in detail – essentially a huge listing of the many different options you can give to your Captain and First mate to make them unique.

Chapter Five contains ten Scenarios, each one with its own gameplay or narrative rub, including one with moving cover, based in a Starport where ships will potentially jet off, removing the protection you were hiding behind and perhaps scorching you in the process.

Page 161 is the credits, and we should take a chance to give our compliments to the layout team, artists, mini painters, and terrain makers who have helped to make the book look as great as it does. Finally, there are crew sheets and Power cards to copy, templates to use, and a Quick Reference guide.

It’s an exciting book and we’re looking forward to getting into some Stargrave gaming soon. With various plastic sets of figures on the way from North Star, to support the release, it looks like 2021’s going to be a good year for sci-fi fans.