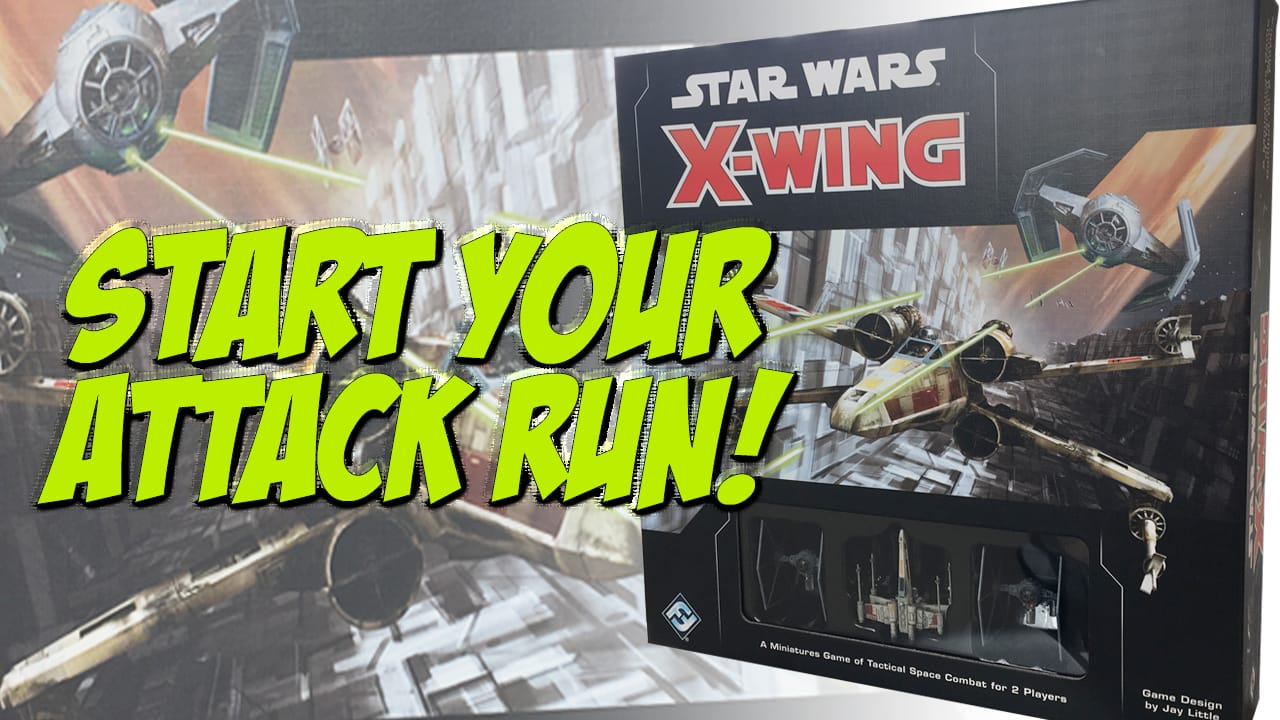 Why yes, we do know this game from Fantasy Flight has been out for a while, and there are tens of thousands of gamers worldwide. But what about those who haven’t managed to see inside the box or are looking to find out what you get? After all, our hobby is about attracting new players, so why not start them off with the excellent Star Wars: X-Wing two-player core set?

Almost everyone has heard of Star Wars, the ongoing, epic saga of a galaxy long ago and far away, so a game like this comes with some great ‘pre-knowledge’ of the background. What’s more, everyone wants to be involved in piloting the iconic spacecraft and engaging in combat with the enemy. So, let’s take a look at what we get in the box and why this is the perfect introductory game for those looking to encourage others into gaming.

Once you lift the lid, you come upon not the main rulebook but the ships and tokens. The miniatures in this box are exact, miniature copies of the iconic fighters of the movies, the Rebel X-Wing and two Imperial TIE fighters. These come pre-painted, with a flight stand which attaches to the special bases (of which more later).  They are, quite frankly, excellently done and painted in the ‘correct’ colours right from the outset – no need to add painting miniatures to your hobby skills to learn or teach just yet.

There are also four sheets of double-sided, full colour printed punchboard tokens, movement rulers, maneuver guides, status markers, base overlays for the space fighters and named character overlays. The moment you open the box, most of the ‘work’ of getting ready for a game has been done for you.

To help you get to the gaming part as quickly as possible, there are two sets of rules, a Quickstart version and the full 19-page rulebook for when you’ve moved beyond that. This gives you ‘show / convention level’ newbie gaming from the outset, with more depth for those who get bitten by the bug and perhaps come along to an organized gaming group. The main rules are simply laid out, clearly supported with pictorial examples and have just enough text to clarify each point. Plus, you still get to play the basic game, and may then add more depth if you enjoy that or keep at it for as long as you want.

The plastic tray inlay has the game cards needed for play, from upgrades to your craft, your pilot or similar, and the damage cards which come into play as the combat continues. Nice ‘proper’ Star Wars graphics, well presented text and not too much reading, with no real reason to refer back to the rulebook as the cards have all you need.

The game uses specialist 8-sided dice with symbols rather than numbers. A few games will teach what each symbol means, making it ideal for use with younger players. The flight bases are here, in clear plastic, and are ‘customised’ with the character or similar of your choice. Right at the bottom is a ‘range ruler’, which shows the distance weapons can be fired. Obvious graphics, simple to use, and all colour coded.

Expansion packs add more ships to the fleet, fighters, bombers and more, allowing gamers to add not only new ships but also new characters. Each expansion pack comes with relevant stat cards, bases, etc. and the ships are also pre-painted – just open the plastc shell and get playing!

Those who already play this game or have seen it played know that this is a top quality product that adds fun to any gaming session. Although there is an active tournament scene, you could just focus on gaming as a part of the Star Wars saga. More importantly, this is also a family game, because almost everyone ‘gets’ Star Wars, whether they are younger than some or just young at heart.

For me, the most important part of this game is that it has set standards which other gaming companies are seeking to emulate or should take a good, hard look at: pre-packaged products, pre-painted miniatures, minimal assembly, with a universal appeal to those from any number of backgrounds. Let’s face it, that’s why the product has fantastic global sales and has grown into an Empire all of its own – it looked around at the rest and decided to put the current or future gamer first and aim to be the best!