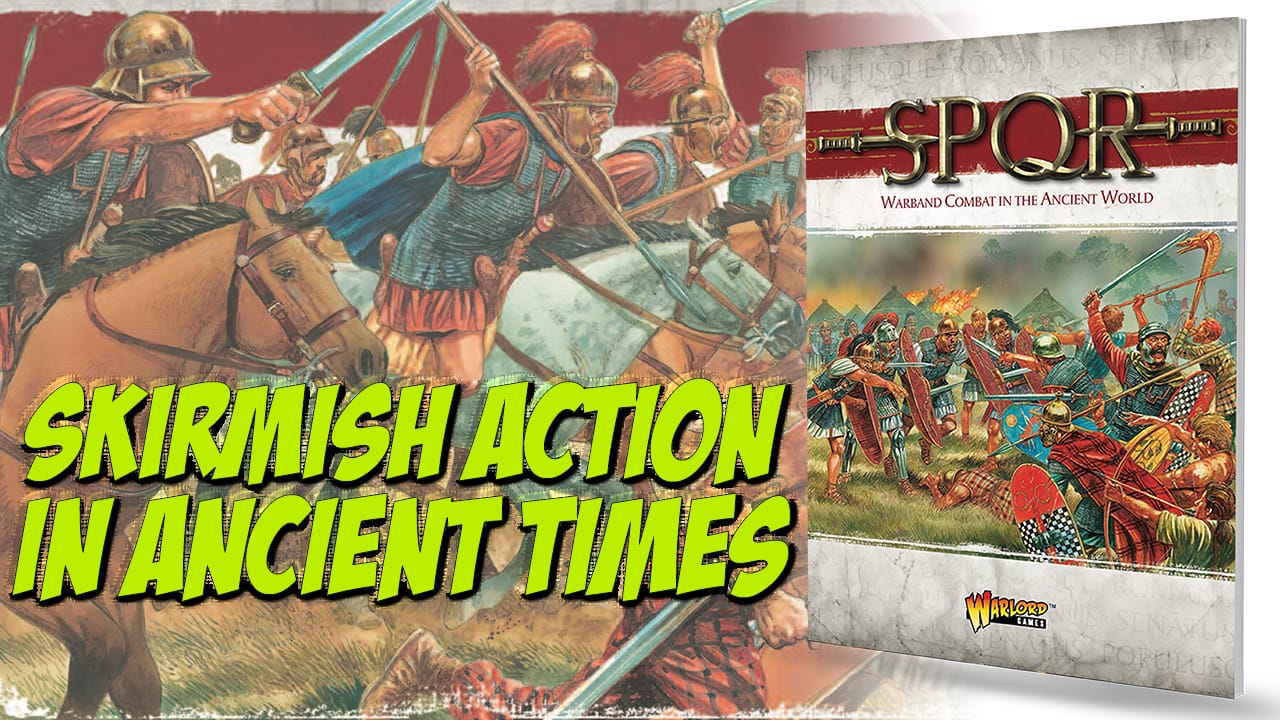 SPQR is the new miniatures game from Warlord Games, in this video we are going to flipthrough the 196 page, A4 softback rulebook, which is available to purchase on its own, or as part of the Clash of Heroes boxed starter set. To read a complete playthrough of the rules and our assessment of the game, see the August issue of Wargames Illustrated magazine, WI382, and read our SPQR Rules Showcase.

The introduction begins with the usual fare about what miniature wargaming is all about and a note on historical accuracy, in which the author pitches the rules as “mostly historical but with a good dollop of style from Spartacus and 300”.

SPQR is equipment light and only requires 15 to 40 figures per side, a tape measure and a dozen or so six sided dice.

As outlined in the Models section, figures should (preferably) be based singerly.

Minions and hero types are also explained here, with minions making up units, for example Roman legionaries or Celtic warriors, and heroes being single models.

The characteristics page show a breakdown of the stats for the models and units, which include the usual tropes of move, melee, bravery (i.e. moral) and wounds (i.e. hits) etc.

The Game Turn page introduces us to The Dice of Fate, which basically means you dice each turn to see who goes first. The game then proceeds in a I-go-you-go fashion, with each player performing two actions with each of his units, before play passes to his or her opposite number.

This next section cover the different actions that may be performed during a turn. Including: Moving, Shooting, Melee and Special Actions.

Offensive actions i.e. Shooting or Melee proceed by throwing a dice for each model shooting or in base to base with a opponent. A six is required for a hit and modifiers are applied for equipment. Armour plays a part in blocking successful hits, but anything that gets through reduces the targets wounds by one.

As it sates in the opening line on page 14. “You have now read everything you need to play SPQR!” It really is that simple. So, what’s in the next 182 pages you might ask? Well, let’s take a look…

Trouble in Gaul is an introductory scenario pitting invading Romans against a local Gallic tribe, designed to ease players into the basic rules. And we are introduced here to the stats for our first minions.

Somewhat inevitably, we then come to the Advanced Rules. Which include heroic challenges, charging into combat, fighting with two weapons, falling over, hit and run units i.e. skirmishers, knockdowns – which covers knocking over heroes,  how heroes can lead a unit of minions stunning an opposition model and a one page long list of special rules for weapons, like “smasher”, which is described as “This weapon is so heavy and brutal when swung with force that it is impossible to stop. A Smasher weapon cannot be Parried by any means.”

The Advanced rules section is rounded off on page 20 before what is actually more detailed advanced rules for using The Phalanx, something that the designers were clearly keen to bring to the tabletop for those of use wanting to get that Phalanx feeling in our SPQR games.

The Equipment section ties different weapons up with different Advanced Rules. For example a club has the Smasher Special Rules before going on to discuss the effect of different armour. E.g. a helmet effectively provides the wearing model with a saving throw of 6.

Equipment is rounded out on the next page, with details on the advantages of things like having a horn in your Warband, and it’s a measure of the type of rules we are looking at that seemly standard wargaming rules like cavalry are dealt with under equipment i.e. a horse is an item of equipment for your model.

In the Heroes and Minions section, greater coverage is given to these two troop types and we are introduced to Experience – through which players can develop their heroes statistics via expanded game play, a la roleplay games or Frostgrave etc.

This side of the gameplay comes to the fore in Campaigns. Here players are given rules for creating and developing their warbands before leading them through linked scenarios and campaign games.

Speaking of scenarios, these begin here and we are provided with six multi-period, multi-Warband scenarios, which are outlined in Warlord’s  typically impressive clear style.

Incidentally ‘Livestock Raid’ is the game we played for the Rules Showcase in WI382.

To quote the opening line of the Talents section “talents are special abilities learned by Heroes that give them a vital edge in battle”. This is another section of the rules that dove-tails with the character progression aspect of the game – as a hero progresses through battles or campaigns he gains new talents.

Talents are arranged in ‘Trees’ like the two here – Twin Blade of Hades and Voice of God. With heroes acquiring the second and three talent as they progress along the tree.

We’re now getting into the section of the book which elsewhere might be called the ‘Army Lists’, in SPQR it’s Creating a Warband.

Taking Athans as an example of the formula, you can see we have  some history including a very nice map followed by the specific characteristics for that Warband, beginning with the hero and proceeding through the different minion units, like Calalryman, Hoplite and archer etc. The lists are concluded with some historical heroes.

Then we have something which I don’t recall seeing in any other ruleset – some scenarios specific to that warband.

Beyond the Athenians, a further 12 Warband lists are presented, including Britains, Caesar’s Legions, Sparta, Persia and more, concluding with Mercenaries – which sees troops drawn from nations not see elsewhere, like Balearic Slingers and Numidian Cavalrymen.

This ‘Army List’ section is a total of 137 pages that’s 70% of the total book, and includes 39 scenarios – an obvious appeal for players who like their rulebooks army list and scenario heavy.

The final page of the book is given over to a Rules Reference sheet.

We hope this Flipthrough has given you a clear idea of what’s inside the SPQR rulebook and whether you want to splash out £20/$32 on the book.