SPQR ‘A Clash Of Heroes’ 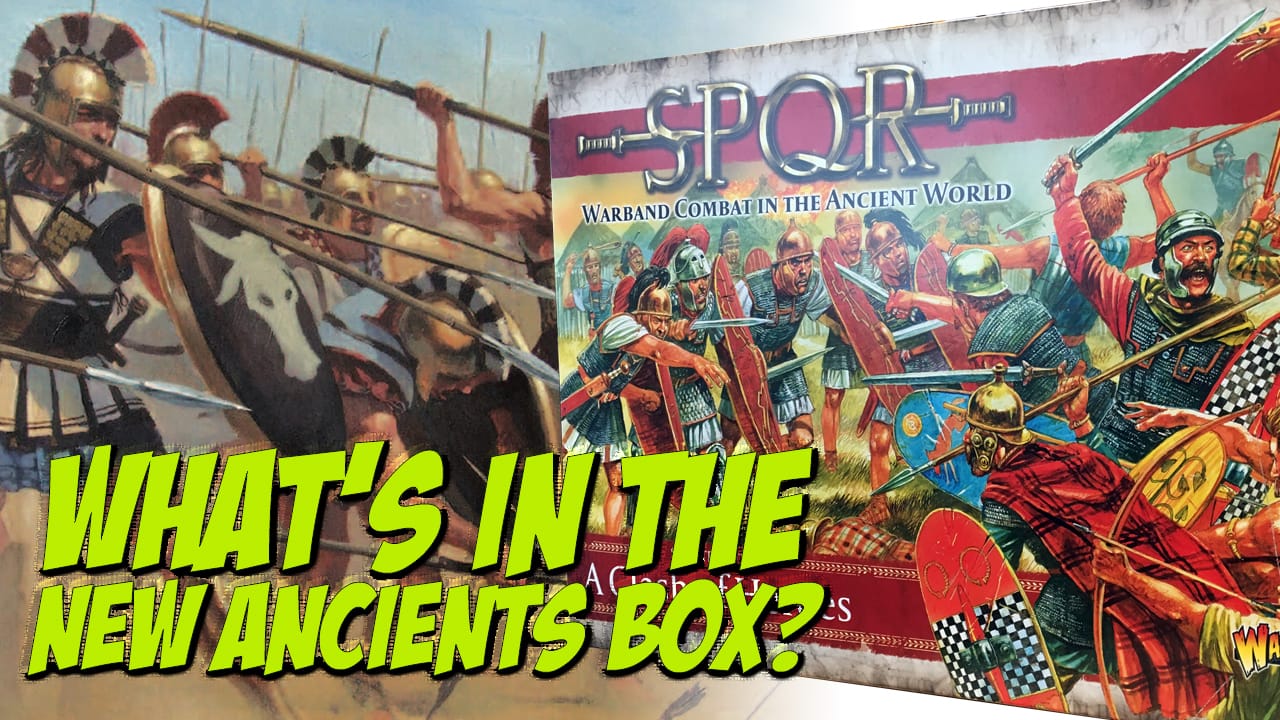 SPQR is the latest miniatures game from Warlord Games. It is available as a stand-alone softback book, or as a part of the ‘A Clash of Heroes’ Starter Set.

In this video we’re going to take a look inside the Starter Set. For a ‘Flipthough’ of the rulebook check out the ‘SPQR Flipthrough’ video and to read a complete playthrough of the rules see the  August issue of Wargames Illustrated magazine, WI382, and read our SPQR Rules Showcase

So, without further ado, we’ll open the nice solid A4 sized box, with a visual of the full contents on the back. Pause this vid here for a look at the complete contents list.

Lifting the lid we first come to the plastic frames. Four Celtic Warrior frames, with 10 warriors on each. These aren’t new frames, in fact they are some of Warlord’s oldest, being first released over ten years ago, but they have stood the test of time well and the figures still look fresh and dynamic.

Loads of single round bases beneath. Followed by four Caesarian Roman frames. Two duplicate frames of command figures, one with pilum arms and the other sword arms. The bodies are the same on all four frames, and the heads/helmets are also duplicates, although the command frames also contain additional heads. Each frame contains four bodies – so that’s 16 Caesarians in total.

The figures in the two clam shell packets are very interesting. One contains 12 Gaelic archers, the other a Celtic and Roman hero. They are all nice looking sculpts, with the Chieftain being a personal favourite. The material they are made from is neither plastic or resin, it is in fact something in between, the flexabilty of which will doubtless not be to everybody’s taste, but is certainly with examining.

In the heroes shell there are some bonus Gaelic heads and shields, which is a nice little freebie.

Beyond the bag of little dice, we have a packet of unit cards which serve as a very useful on or side-table guide to the stats and special rules for the models in the starter set and will appeal to those who welcome easy in-game reference, and will annoy those who don’t like tabletop clutter.

There are also some nice waterslide shield transfers here.

Delving deeper, beyond the card inlay, which incidentally has a handy cut-out-and-keep Rules Reference sheet on the other side, we come to the chunky SPQR rulebook.

Following this very brief flick through the book, we are going to finish this unboxing video, but for those of you who would like to take a more in depth tour of the rules, check out our SPQR flipthrough vid.