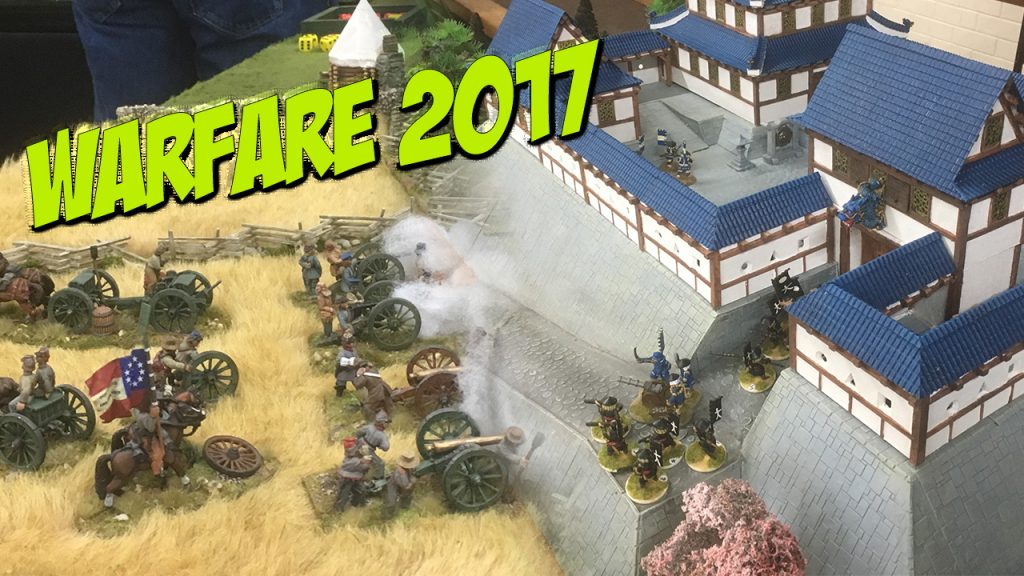 We took the time to visit this wonderfully laid back wargames show in Reading, UK recently. Whilst we were there, we discovered a host of new products from a variety of companies that would encourage many a gamer to part with their cash.

1st Corps continue to add even more to their 20th Century Follies range. Suitable for use during the period between World War One and World War Two, they are equally at home in Pulp games as they are during the Very British Civil War or similar. What we have here are two ‘unique’ miniatures that, once seen, interested gamers will have to have!

The first is a nicely depicted figure travelling at speed on a 1930s era motorcycle, robes flowing in the wind. The fact that this is a figure in a nun’s habit complete with Rosary belt, driving gloves and flying goggles only serves to add to the ‘uniqueness’ of this metal miniature. I don’t know why it exists, but I like it!

The other release is a four wheel roadster with a short wheelbase. It comes with identical twins, who sport suits, habitually wear bowler hats (although the driver is missing his) and carry canes. They seem to be in a hurry, perhaps on their way to the scene of a crime or to rescue a young reporter and his inebriated sea captain friend. The main body of the vehicle is resin, with metal wheels, axle and crew. This is a more ‘generic’ vehicle and subject but is still something quite special for those who are aware of the influence for its appearance.

Elite Wargames and Models have decided to specialize in providing a range of female miniatures for a number of periods. They have started with the Napoleonic era, providing infantry, civilians and artillery crews for most of the main combatant nations from the period, from British Rifles to Spanish Guerillas and Russian Cossacks. What drew our eye were two offerings for World War Two, a pack of Female Resistance Fighters and the unusual Luftwaffe Flak Crew. A perusal of the stand confirmed that all of these miniatures have appropriate uniforms and weaponry for troops of the period, with the civilian types being clad in outfits suitable for warmer climes.

The Flak Crew consists of five miniatures, three of which are the actual gun crew, one armed with an MP-40 SMG and one figure with a tea tray (!). All of the figures are wearing what appears to be standard Luftwaffe ground forces uniform and are in a number of poses.

The always impressive Empress Miniatures have released their Late World War Two Volksgrenadiers for those who field German forces. These could also be fielded as Grenadiers and have some of the ‘better’ uniforms and equipment of the late war, with hooded camouflage smocks, ankle boots and puttees and Sturmgewehr 44 assault rifles. These are great sculpts by Paul Hicks and convey the grim resolve of the weary warriors during the last winter of the war or just the stress of trying to hold back the Soviet hordes.

This particular pack consists of four miniatures, in a number of advancing poses. Two of the miniatures wear greatcoats beneath their smocks, emphasizing the idea of it being cold. The other two wear the smocks with trousers. Excellent poses and sculpts, showing a great deal of research into equipment, uniforms and weaponry.

There were even more Women’s Land Army packs available from Bad Squiddo, bringing the overall number of releases so far to six packs. This time around, we chose to feature the pack with shotguns, five armed warriors ready to defend themselves and their country from downed Luftwaffe pilots or full Nazi invasion. All are depicted in the Land Army ‘uniform’ of standard work clothes but have a touch of character in headgear or posing. My favourite is the figure in dungarees carrying her broken double barreled shotgun under one arm, her other hand nonchalantly in her pocket, perhaps reaching for cartridges to reload. As always, these are great miniatures from this still expanding range and continue to celebrate the contribution of these Home Front heroes. Come on Harry Hun, we’re ready for you!

There’s a number of supplements and additions to the world of the popular 7TV rules on the way, and one of these is entitled Children of the Fields. To support that upcoming release are suitable miniatures to represent various new characters, some of whom may be familiar to those with an interest in dark British comedy.

The Children of the Fields Stars pack consists of The Miller and Miller’s Wife, The Hurdy Gurdy Man and the Crow King. The Miller and his wife are staunch supporters of the local community, often to the exclusion of anyone who’s ‘not from round here’. Neither of them like shouting, although the Miller’s Wife does have an interest in the world beyond the local, with a unique map reading style.

The Hurdy Gurdy Man is the stuff of nightmares (mine anyway!) and is known as the former proprietor of an unusual travelling show. He is often searching for a person called ‘Dave’ and has a number of wives, whether they are fully aware of the ‘marriage’ or not.

The final figure is another character with a sinister appearance, seemingly able to call upon the support of avian friends. Clad in ragged clothes decorated with feathers and a be-feathered top hat, who knows what this character’s aims may be?

As always, these CD miniatures are full of character and are perfect for a whole number of adventures.

As well as specialising in 20mm World War One and Inter War figures and vehicles, this great company also produces some of the more obscure figures for conflicts that are largely forgotten. Here we have a pack of 10 Yaqui Indians, designed to represent the type of warriors who took part in the continued resistance to the depredations of the Mexican government during the early part of the twentieth century and on into the 1920’s and 1930’s.

These particular miniatures are armed with a range of weapons, some with bows, others with rifles and some only with knives. Many of these weapons come as separate parts, which allows you to create plenty of variety. The poses of the figures are equally varied, reflecting the more ‘warband’ approach to combat rather than the regimented. Clad in typical clothing of the time, the same figures could also be used to represent Yaqui who fought the Mexicans during the 19th Century.

The gloriously eclectic ranges from Parkfield Miniatures have been added to once more. There are new packs of Soviet and Finnish troops for the early part of World War Two, the so-called Winter War of 1939 – 40 where the Finns took on the might of the Soviet empire and pushed them back. These are men bundled up against the cold, often in greatcoats or Finnish specialist snow suits. They are armed with typical infantry weapons of the time. The Finnish officers seem to be best equipped of all with fur hats and winter coats, whereas some of the Soviet troops make do with greatcoats and the budenovka cap.

These are useful miniatures for those looking to provide bulk to their 28mm forces. The attention to detail is good, and they cover a relatively obscure war that should have more attention lavished upon it.

RH Models is one of those companies that stocks all types of miniatures but doesn’t get the chance to promote itself. All the figures are 20mm in size, and cover a number of pre- and post-1945 periods from the Spanish Civil War to the far future. Ranges include the former Bandera Miniatures Spanish Civil War figures and AFV’s, Axal Miniatures WW2, Liberation Miniatures Post-1945 Figures and AFV’s, Little Green Men Science Fiction Figures and AFV’S and the Red Star and Black Star AFV ranges. Most of those ranges have been extensively added to by the owner, who sculpts, manufactures and distributes everything he makes. We picked out samples from just four periods, Portuguese troops from post-colonial Africa, British troops of the 1960s / 70s, early 1980s British Royal Marine Commandos in cap comforters and armed miners for the Winter of ’79 setting. As an example of the vehicles on offer, we come more up to date with a Landrover configured using the WMIK option. These are all finely detailed miniatures sculpted in a variety of action poses and are very reasonably priced.