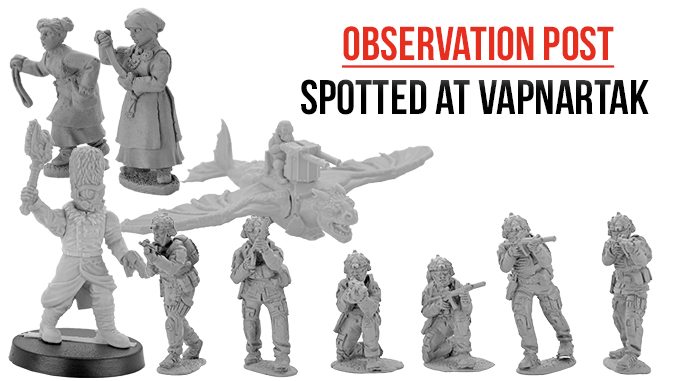 We made our now annual journey to the excellent Vapnartak show in York, England on February 4th, one of the first big shows of the year and a great introduction to another hobby year.

Among all the amazing games being played and traders selling a host of products, we picked out the following that drew our eye.

The new Dress Uniform part of the Regiments range mixes the historical and sci-fi to offer multi-part resin troops with a twist. Whether you want a Steampunk Napoleonic look, pith helmeted VSF warriors for Mars or soldiers for an extended World War One, these are the perfect way to create units.

The Italian Colonial Askaris from this 20mm manufacturer were the latest addition to their excellent Inter War Period range. With their fezzes and lightweight uniforms, the use of colonial troops added an aggressive edge to Il Duce’s forces during their efforts to create a new ‘Roman Empire’.

There were more releases for the Spitfyre air combat game based upon the historo-fantasy Weird War Two Panzerfauste universe. This 10mm sized game allows devotees of the concept to engage in aerial combat. The ‘aircraft’ in this game are giant versions of various real and fantasy creatures. Pictured here are two examples, the Dwarven ‘Condor’ bomber and the Orc ‘Hurricane’ fighter.

Spectre had more packs of 28mm figures available for sale, including new UK Special Forces, this SAS Rural Ops Squad, equipped for operations such as close target reconnaissance, observation post or fighting patrols. All models have lightweight helmets, body armour, pistols and combat clothing. Belt kit and patrol packs are carried for extended operations over a couple of days, containing comms and med kits, ammo, grenades and other operational gear.

Bad Squiddo recently ran another successful Kickstarter, this time for Shieldmaidens – Dark Age era female warriors. This pack of warriors armed with slings was available as a pre-release offering on the day.

Part of the 20th Century Follies range from Curtey’s, these Pulp Era inspired figures offer some great characters for your gaming. This growing range may be expanding in a quite eclectic fashion but gamers are guaranteed to find something to inspire them.

Our favourite discovery was found over at the Empress stand, who had some of the latest packs of their excellent Late WW2 Americans available. These are wearing the M43 uniform, making them usable for not only the push into the Third Reich but suitable for combat operations in the Korean War. Sculpted by Paul Hicks, the level of realism and attention to detail to these miniatures is of the usual high standard one would expect. These are not caricatures but instead accurate representations of soldiers at war. The range continues to expand, as do the Late War German Volksgrenadiers. If you are looking for properly proportioned miniatures in the correct kit for this period, check out what Empress Miniatures has on offer.