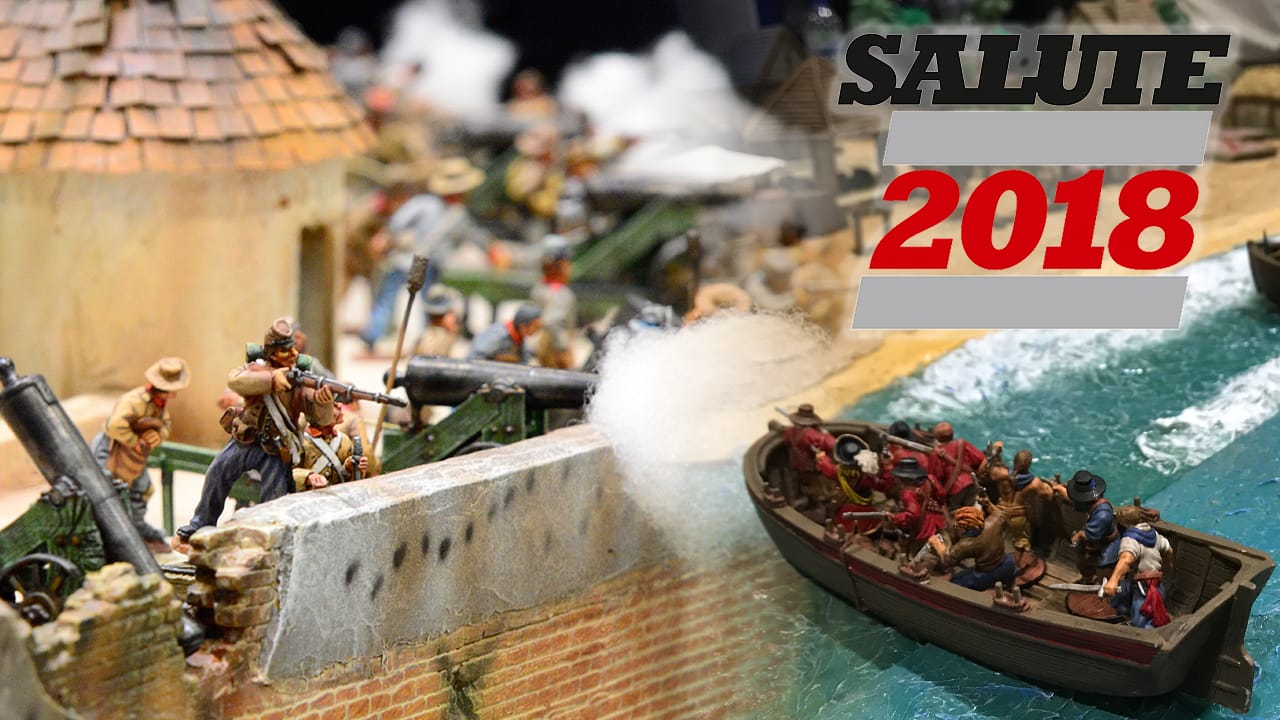 The Salute Wargames Show is the biggest in the world and with attendees numbering over 9,000 it has become an annual launchpad for new product releases for several of the companies that attend.

Wargames Illustrated reporters spent the day stalking the hall at Excel in London A) taking photographs and reporting on the games (see next month’s magazine – WI368) B) Videoing the best games and interviewing the people behind them – see the video below C) Taking a look at the new products which were being launched at the show and talking to the manufacturers about them – See words and pictures below.

“We are releasing the Greek Light Cavalry at the show. Below is an image of the rider frame which will be combined with the Greek Heavy Cavalry horse frame.

We will also have our recent new releases; the Roman Legionaries and the Gallic Warriors
and Fanatics.

One of the other images here shows a digital render of the druid that will be included in the Ancient Briton Chariot and a couple of concept briefs for the chariot.”

“We always like to put on a bit of a show at Salute, it’s a great opportunity to display our models and games with tasty looking demo tables, we’ve got two this year. But as well as playing we will have plenty of new things to purchase! Including: new Grandville models, Creeper Hounds, a Shark, new ‘Heroes’, trucks and buggies, and we are now carrying TARV Models ‘U.F.O. Aliens’.”

Great Escape released a new full colour softback rulebook called 1914, which focuses on “operations of manoeuvre” during the Great War. This includes a 19 card Tactical Advantage deck and is supported by a range of new 12mm miniatures.

Other releases include two new Gangs for The Curse of Dead Man’s Hand.

The box contains all the parts to assemble 12 plastic cavalrymen plus bases suitable for the Swordpoint gaming system. They can be used to represent later Roman or early Byzantine armoured cavalry. Parts from this box are compatible with most parts from all their other box sets so you can do many, many conversions.

The new Swordpoint supplement Charlemagne was also on sale for the first time. Oh, and Age of Crusades for SAGA is coming soon.

Eureka Miniatures had several new products on their stand, including 28mm Bronze Age Greeks (perfect for the Trojan Wars) 28mm Papua New Guinea Rifles, a valuable part of the New Guinea campaign in WW2 and 28mm Innsmouth Residents; the worshippers of the Deep Ones trying to pass as human beings.

Also available are 28mm British in Afghanistan and Afghans, with Afghan families riding motorbikes as well as Afghan fighters on two wheels, plus British infantry in helmets, with beret-wearing versions due soon.

28mm Cows, pigs and chickens. If you are reading this copy of WI hot off the press at Salute – visit their stand at Salute, say “Whatcha Cock!” and receive some free model chickens.

In 20mm they had, German Afrika Korps for the Western Desert. Infantry and support weapons are available now at the show, with command and engineers to follow hard on their heels.

Studio Miniatures launched Turf War Z in collaboration with Broken Spirit Wargames. The rule system and the first of a new range of minis for the game will be out. In addition, all of the existing ranges of Zombies and Survivors can be used in the game.

The human gangs are 28mm metal multi-part miniatures and come in a box set of seven miniatures. Each gang also has Icons, character figures which you can add to your gang for extra abilities etc.

The first five gangs released on the day were LAPD, Latino, Bikers, Triads and Spec Ops.

Gringo’s a limited number of sets of ‘Flashman and the Dragon Lady’, plus the first from their Tonkin 1883-85 range, including the Chinese Black flags and the first French Legionnaire, a guard duty miniature.

This is just the start of a French Colonial Wars range, which will expand to include the Dahomey Wars and Madagascar.

The big release for Perry Miniatures at Salute 2018 was the plastic Line Chasseurs-á-Cheval.

In addition they were also showing off 3-ups for forthcoming plastic WW2 US infantry for The Mediterranean Theatre (seen spinning below) and Agincourt era knights.

Rubicon had a new series of plastic World War Two characters, which come as blister-packed pairs.

“As well as welcoming Salute goers to our massive stand which housed numerous demo games (including our Salute released Blood Red Skies!) we showcased a host of forthcoming product and releasing on the day.

Bolt Action plastic Winter German Infantry, plus metal US Airborne and British Infantry in winter clothing. We also had a new Hetzer Zug for Bolt Action as well as new Doctor Who and Gates of Antares releases.”

Landsknechts – a selection of figures from the new boxes

North Star Military Figures and Osprey Games continue their fruitful relationship with the release of their latest plastic box set in the Oathmark fantasy battles series – The Elves – 25 plastic elves which can be armed with bows, swords, spears and/or shields.

Released at Salute WAS this new range of English Civil War miniatures from 1st Corps. Gamers can choose from clean shaven or bearded heads and build up units rapidly using the packs available. Although this is the start of a new range, there are enough variants in this initial release to put together a suitably varied force for this popular wargames period.

Wayland Games provided the following information in their own, uniquely understated style:

“We are very excited to announce that Earle Shepherd’s mercenary Outlaw gang is now available for pre-order, with their release on April 14th. If you’re after a posse who will work for the highest bidder (who are we to judge?) this highly anticipated team is most definitely for you!

Want some even better news? If you’re attending Salute this year, we will be bringing retail copies of The Deadly Seven along with us so you can purchase your posse direct from Warcradle Studios on release day! I know, we’re good like that.

We know you’ve all been on the edge of your seats for The Wayward Eight, take a look at these previews and prepare yourself for the release of Marcus Wayward and his respectable gang of Outlaws…”

Fireforge are currently working on a new set of fantasy figures for their Forgotten World rules. The plan is to launch a kickstarter campaign to fund the release of six different plastic sets, plus a two player starter set with rules and miniatures. The pictures show only one of these sets, which allows you to build up to 12 Northern Warriors.